Erdogan visit delights some in Kyrgyzstan, annoys others

The Turkish leader is insistent Bishkek do more to squeeze out followers of Fethullah Gulen. 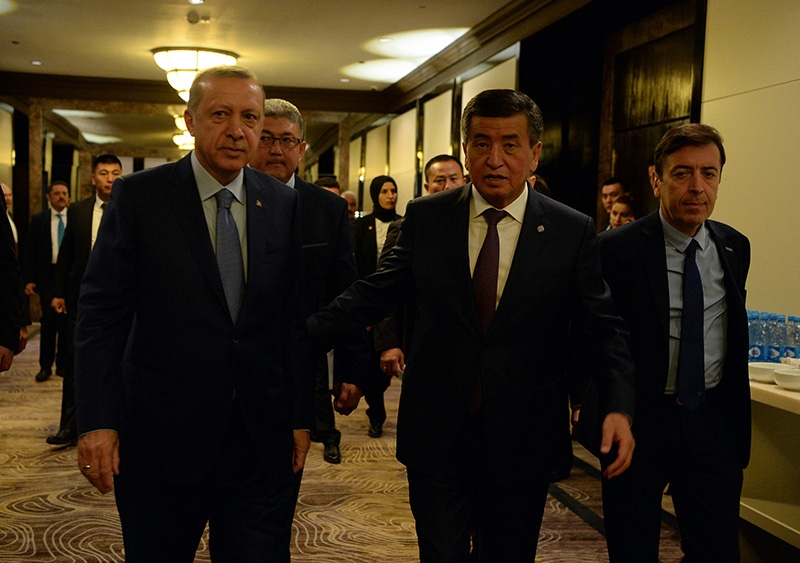 Turkish President Recep Tayyip Erdogan has made both friends and enemies during a visit to Kyrgyzstan that opened with a meeting with host head of state Sooronbai Jeenbekov.

Erdogan’s encounter with Jeenbekov was the first between the two nations’ leaders since former Kyrgyz President Almazbek Atambayev railed against Turkey in a characteristically unguarded rant in 2016. The source of Atambayev’s ire on that occasion was Turkey’s demand that Kyrgyzstan close schools and educational institutions linked to Fethullah Gulen, a U.S.-based cleric whom Ankara accuses of masterminding a failed coup in 2016.

While a warming of ties was evident from a joint public appearance on September 1, Erdogan made it clear that he feels his concerns about Gulenist influences in Kyrgyzstan remain unaddressed.

His main concern was the Central Asian country’s own welfare, he said. Gulen’s people will "infiltrate the army, police and other state structures and carry out coups" as they had tried to do in Turkey, Erdogan predicted.

Jeenbekov, bemused by the reference, noted that the Gulen-affiliated schools in question, which have a reputation for academic excellence, had been rebranded and brought under state control.

"Kyrgyzstan will never aim to harm Turkey," he said.

Still unsatisfied, Erdogan returned to the topic during a September 2 business forum in Bishkek, where he said that Turkish businesses should look for opportunities to invest in Kyrgyzstan, “but FETO will try to create obstacles for you.”

FETO is the Turkish language acronym for what Ankara has, with more than pinch of drama, dubbed the Fethullah Gulen Terrorist Organization.

Remarkably, Erdogan referenced Gulen once more at a ceremony the same day at Bishkek’s Manas University, which receives funding from Ankara. There, Erdogan pledged to “rescue Kyrgyzstan from the shadow of FETO.”

Most awkwardly for Bishkek, Erdogan hinted several times during the visit that Turkey was holding back economic support so long as the Gulenist influence remains present in the country.

Even Turkish analysts with little affection for Erdogan lean toward supporting the idea that the botched coup attempt in Turkey two years ago was somehow inspired by Gulen. Since the coup attempt, tens of thousands of state employees have been arrested in a clampdown that has also seen at least 150,000 state officials dismissed.

People in Kyrgyzstan legitimately wonder what all that has to do with them, however.

“Erdogan says that there is no place for (Gulen-inspired schools). But our son is already in the fourth grade there,” wrote one Twitter user. “I am wondering whether on Tuesday the schools will still be operating and how they are going to close them. There are tens of thousands of pupils (in these schools).”

“So some dude arrives, opens a mosque and demands we close schools. My poor people, where are we headed?” said another, referencing Erdogan’s cutting the ribbon at a new mosque with Jeenbekov during his stay.

Kazakhstan, which also hosts Gulen-inspired schools, has likewise opted to rejig the institutions rather than close them down completely. But Kazakhstan has not come under the same level of pressure from Ankara as Kyrgyzstan.

Turkey may simply feel that it has more leverage over the poorer of the two countries.

Ankara has noted in the past that it pays Turkic cousin Kyrgyzstan’s membership fees at the United Nations. Erdogan has also pledged to build new schools with support from the government-backed Maarif Foundation that has taken over the running of Gulen schools in other countries.

Just as Erdogan’s rule has divided Turkey, so has his visit split opinion in Kyrgyzstan, a country that Ankara believes is well within its cultural, political and economic sphere of influence.

Despite the anxieties of school fee-paying parents, Erdogan was greeted enthusiastically by a crowd of well-wishers – Kyrgyz and Turkish citizens – shortly after arriving in Bishkek.

One Bishkek family even went as far as naming a son born just before his visit in his honor, according to a Kyrgyz media report.

Erdogan's visit was rounded off by a September 3 summit of the leaders of the Turkic council, a talking shop that includes Azerbaijan and Kazakhstan, as well as Turkey and Kyrgyzstan.

The council has precious little to show for almost a decade of existence, but received a boost at this summit, as Uzbek leader Shavkat Mirziyoyev expressed interest in joining.