Ethnic Kazakh's life in balance as deportation to China looms

Kazakhstan is trying an ethnic Kazakh from China for illegally crossing the border. The case threatens to aggravate nationalist views of the powerful neighbor. 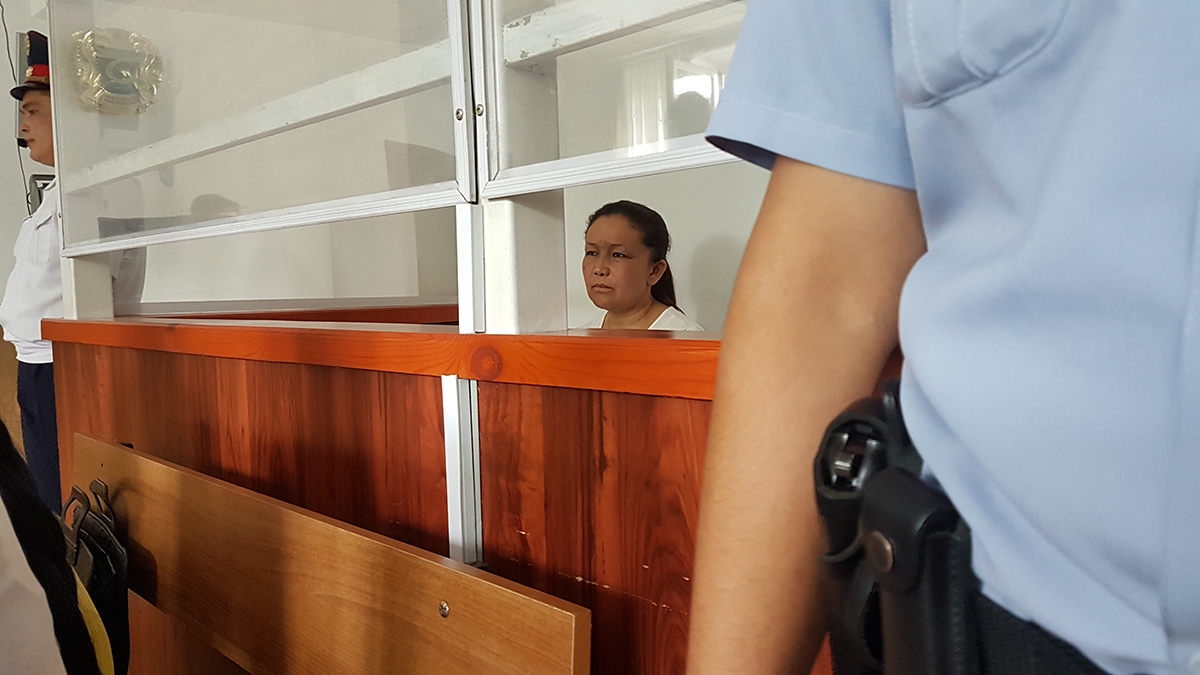 Sayragul Sauytbay, an ethnic Kazakh and Chinese citizen, sits enclosed in the glass cage reserved for defendants at her trial. (All photos by Almaz Kumenov)

A trial taking place in a small quiet town in eastern Kazakhstan, just across the border from China, may decide the life or death of Sayragul Sauytbay.

Sauytbay, 41, an ethnic Kazakh and Chinese citizen, is accused of using forged documents to cross into the country from China. Under Kazakhstani law, she faces $7,000 in fines or a one-year jail sentence. Either way, if she is found guilty, deportation may well follow.

“I fully accept my guilt and I am willing to endure any punishment. I only ask one thing – that you do not send me to China. A death sentence awaits me there,” she said during her second court hearing at the Panfilov district court, on July 13.

The case has placed Kazakhstan in a tricky predicament. Releasing Sauytbay or declining to deport her will anger Beijing, with which Astana enjoys tight economic ties. But handing her over could spark fury in a country where Sinophobic sentiments have proven a reliable rallying call for government opponents.

Sauytbay’s hearing was held on a stiflingly hot day in a stuffy and cramped room. Some 40 people, including relatives, activists and journalists, squeezed onto the three rows of benches.

In the middle of this cluster was Sauytbay’s family – her spouse Uali Islam and their two children, 13-year old Ukalyai and eight-year old Ulagat. The boy sat on his father’s knee, and the two shared a bottle of iced tea.

As the start to hearings approached, people in the room chatted about the case, but a small group of people in the corner remained wordless. It was two representatives of the Chinese Embassy accompanied by a translator.

“The Chinese have come, the Chinese,” people in the gallery whispered, pointing surreptitiously.

When Sauytbay was led into the courtroom, her right hand was handcuffed to that of a police officer. She was slight in stature and her weather-beaten face wore a fatigued expression. As her daughter rushed to hug her, the little girl burst into tears.

“Everything will be fine my dear, you’ll see. I am fine. Don’t cry,” her mother said.

After this exchange, Sauytbay was enclosed in the glass cage reserved for defendants.

The charge, as read out by the prosecutor, was that Sauytbay on April 5 "deliberately and illegally crossed the state border of Kazakhstan" from China with the use of fake documents. She was then detained by officers with the National Security Committee, the successor agency to the KGB, on May 22.

Sauytbay said she had no choice but to act the way she did.

For several years, Sauytbay, who was a member of the Chinese Communist Party, worked as the director of a kindergarten. The position in effect made her a state official, with all the responsibilities that implies.

In the summer of 2016, her husband and children moved to Kazakhstan, where they received citizenship within the year. Kazakhstan’s government has a program to promote the relocation of ethnic Kazakhs from nearby nations.

It was around this time that the Chinese authorities are said to have accused Sauytbay of passing on confidential information to Kazakhstan. She was fired from her kindergarten, stripped of her IDs and threatened with prosecution.

“In 2018, they sent me to work in a political reeducation camp in the mountains. Officially, this is a training center where people study Chinese ideology. But in reality this was a prison,” she told the court.

Kazakh repatriates from China have for several months been sounding the alarm about these alleged centers, insisting that people are held against their will and often placed in shackles.

The plight of the Uyghurs, who are also native to China’s Xinjiang region, is better known. That community, which is predominantly Muslim and Turkic language-speaking, like the Kazakhs, has been object of repressive policies for the past quarter century. The brutalization has waxed and waned over the years, often in response to uprising. Countless people have been turfed out of their homes, arrested or disappeared, according to rights activists. Similar treatment is now being reserved for Kazakhs, say activists.

The reeducation camps mentioned by numerous survivors are the most sinister aspect of the campaign. Former inmates have described starvation, torture and a system of indoctrination akin to what China saw at the height of the Cultural Revolution.

Sauytbay said inmates are required to read ideological literature, memorize the national anthem and study Chinese. Detainees are predominantly Uyghurs and Kazakhs, whose cultural distinctness is taken as a sign of “lack of patriotism.”

For Kazakhs living in China, suspicions can be aroused when their relatives move to their historic homeland, as envisioned by the Astana-funded program. It is when the repatriates travel back to China to see friends and relatives or to finalize some bureaucratic business that they can be detained, activists say.

The numbers of people caught in the Uyghur and Kazakh dragnet is shrouded in uncertainty. The U.S. Congressional-Executive Commission on China has cited what it says are credible “media reports that as many as 500,000 to a million people are or have been detained in what are being called ‘political education centers.’”

Sauytbay volunteered a startling number during her testimony.

“In the center where I was, there were more than 2,500 ethnic Kazakhs. And I know that in that region, there were several other similar camps,” she said.

Her remarks sent a murmur of indignation rippling through the court.

Whenever Chinese authorities have been asked about the camps, they have routinely denied their existence, although they are eager to remind people of their ongoing fight against alleged Islamic extremism in their remote Western regions.

Sauytbay claimed that the Chinese authorities often sentenced Kazakhs to death. She spoke about one woman who was put to death for sending footage of a flag-raising ceremony in China to relatives in Kazakhstan. This was deemed an illegal transfer of information to Kazakhstan, Sauytbay said.

“These Chinese are capable of executing our kinfolk without a trial or investigation – just on the basis of a suspicion. Verdicts are passed after just a few minutes. They don’t consider us people,” Sayakhat Asimkhan, a resident of Almaty, in Kazakhstan, who moved away from China 10 years ago, told Eurasianet.

Sauytbay said that even mentioning the reeducation camps while abroad could be considered a violation of state secrecy and is therefore punishable by the most extreme measures.

There is no way of independently verifying any of these claims.

Sauytbay’s lawyer, Abzal Kuspan, told Eurasianet during recess that the fate of his client remains uncertain. Under Kazakhstani law, since Sauytbay is a citizen of a foreign nation, deportation appears inevitable.

“But she has some protection by virtue of international agreements — the International Covenant on Civil and Political Rights and the UN Convention Against Torture, which have been ratified by Kazakhstan and are afforded priority status under national law. These agreements forbid deportation to a country where rights will be violated, not to speak of where somebody’s life will be placed in danger,” Kuspan said.

But as Kuspan admitted, this is uncharted territory for Kazakhstan, and it is difficult to know which way the courts will lean.

After the hearing, journalists mobbed the Chinese representatives present to ask for clarifications on their position, but the diplomats fled to their vehicle in silence. They were chased to their car by the reporters and activists.

“Hey, why won’t you answer?” “People are asking you questions.” “Hey translator, you’re Kazakh, translate this to them,” said the activists, some of whom had also previously fled from China. One shouted in Chinese.

Sauytbay’s husband, Uali Islam, was more equanimous and displayed no anger toward the Chinese representatives in the court. Instead, he concentrated on consoling his distressed daughter.

“The children are worried, they just want their mom to come home. I tell them that mom will be better off in prison, in Kazakhstan, as long as she doesn’t go back to China. Otherwise we won’t see her anymore. But this is so hard to explain to children,” he told Eurasianet.