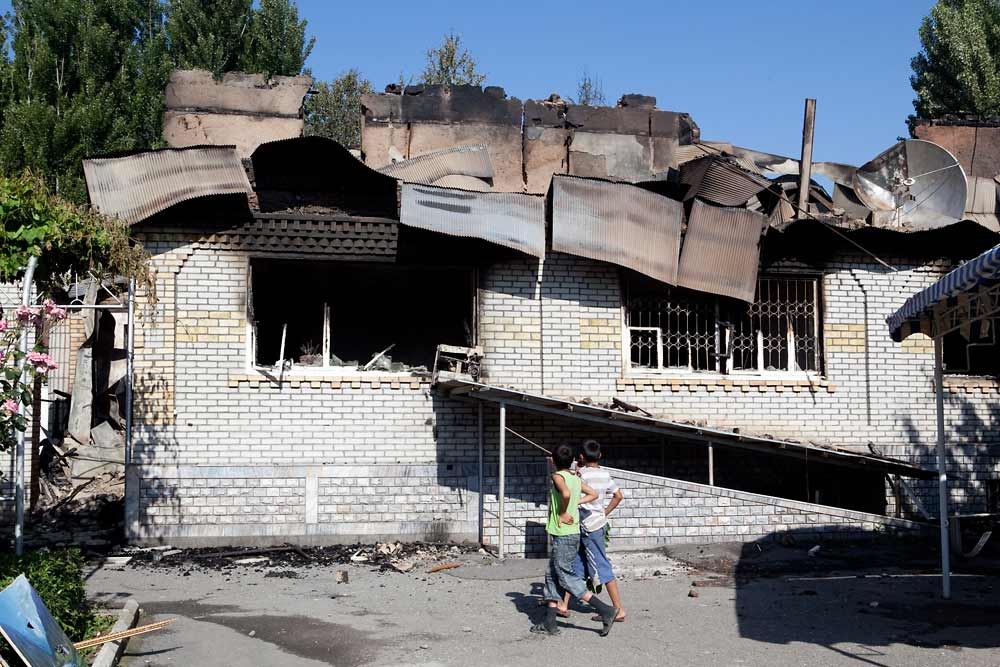 Kyrgyzstan’s provisional government is trying to enforce a state of emergency in southern Jalal-abad Province after inter-ethnic clashes on May 19 between local Kyrgyz and Uzbeks left at least two dead and 71 injured. Amid swirling rumors, groups of Kyrgyz and Uzbek youths in major settlements, including Jalal-abad and Osh, were reportedly organizing into self-defense groups and arming themselves with clubs and brickbats.Provisional government officials blame supporters of ousted President Kurmanbek Bakiyev, whose power base was in Jalal-Abad Province, for stirring up inter-ethnic tension. But witnesses trace the origin of the May 19 violence to actions taken five days earlier, when a local Uzbek community leader, Kadyrjan Batyrov, an official of the Rodina (Motherland) Party, rallied his supporters to help take back the Jalal-Abad provincial government headquarters from Bakiyev supporters. [For background see EurasiaNet’s archive].  The counter-attack by provisional government backers on May 14 restored acting Governor Bektur Asanov to power, less than 24 hours after he had been unceremoniously ousted from his office by Bakiyev partisans. Since then, Asanov’s management style has come under heavy criticism, especially from the pro-Bakiyev camp. [For background see EuarsiaNet’s archive]. Ethnic animosities have also simmered since May 14, with Batyrov becoming a lightning rod for criticism by many local Kyrgyz, especially those with connections to the Bakiyev clan. Many Kyrgyz apparently believed that Batyrov and a group of his Uzbek followers played a leading role in burning down the Bakiyev family compound in the village of Teyit, near Jalal-abad, on the night of May 14. Batyrov has told journalists that he was present in Teyit when the buildings went up in flames, and he pointedly refrained from criticizing the evident act of vigilante justice.Dissatisfaction reached the point on May 19 that young Kyrgyz toughs evidently decided to take matters into their own hands. “Today at 10 or 11 am, group of young Kyrgyz men gathered at the hippodrome. They took two resolutions: first, to capture and judge Batyrov and, second, to remove Asanov and his deputies from their positions,” a local journalist at the scene told EurasiaNet.org.A mob numbering approximately 5,000 eventually formed and made its way to Batyrov People’s Friendship University in central Jalal-Abad, an institution that Batyrov founded and heads. [For background see EurasiaNet’s Inside the Cocoon blog].“Some people started moving towards the provincial administration building and then the university. When they reached the university, there was a row of Special Forces protecting it. I assume inside the university there were pro-Batyrov people,” the journalist said. “When the crowd started throwing rocks at the building, Special Forces started shooting into the sky and Batyrov’s people started shooting from the building. They had weapons. Some people were injured, and I personally saw four wounded people.”Though it is unclear who shot first, witnesses agree both the Kyrgyz protestors and the Uzbek Batyrov supporters were armed.The scene conjured up ugly memories of inter-ethnic violence that broke out in Uzgen, near Osh, back in 1990. The massive rioting left hundreds dead and caused extensive property damage.Provisional authorities are fearful of a repeat of what is now known as the Osh events, and they are striving to play down the inter-ethnic element in the May 19 clash. Disputing reports the fighting is ethnically motivated, the Jalal-Abad governor’s press secretary, Zamirbek Sadirov, maintained that the protestors outside the university were simply after Batyrov. “They have nothing against Uzbeks. Nobody is touching anyone's houses and no lootings are taking place. We hear that Uzbeks are gathering, but we want to say that there are Uzbeks too in the crowd of protesters who are demanding Batyrov,” he told EurasiaNet.org late on May 19.“I am afraid this could escalate," he said, adding that the protestors outside the university had moved to the governor’s office.As night fell on May 19, witnesses in Jalal-Abad and Osh, the largest city in southern Kyrgyzstan, reported groups of young men were arming themselves with sticks.“If they arrest Batyrov, a war will start between Kyrgyz and ethnic Uzbeks,” said an ethnic Uzbek resident of Jalal-Abad. “That day [May 14], not only ethnic Uzbeks fought against pro-Bakiyev people in Jalal-Abad, but mostly Kyrgyz. It is ridiculous to blame ethnic Uzbeks for the mass disorders.”Officially, Uzbeks account for 776,000 of Kyrgyzstan’s 5.4 million population. But many say the number is closer to a million, mostly in southern Kyrgyzstan.Inter-ethnic tension has risen amid weeks of conjecture that some new political parties might be formed along ethnic lines. Ending such speculation, Omurbek Tekebayev, who is overseeing the constitutional drafting process, said on May 19 that such parties would not be registered. “Creating parties based on a religious, and … ethnic basis is prohibited. Yesterday we agreed on that,” he told journalists at a session to discuss the final draft constitution, to be released on May 20. [For background see EurasiaNet’s archive]. Local observers suggested biased local reporting helped fan ethnic tensions. "The recent events in the South and their coverage in national and local media outlets show that it is extremely necessary to present balanced reports to audiences. We think that at present, a high level of professionalism, competence and responsibility are required to adequately report on problems," a group of media activists said in comments carried by the AKIpress news agency on May 18.The situation appears to have caught the provisional government off guard. Acting Defense Minister Ismail Isakov and acting Interior Minister Baktybek Alymbekov flew to Jalal-Abad late on May 19. Shortly after, a government spokesman told assembled journalists to please file balanced reports.