The last two meetings between the two countries’ leaders have been in Brussels. Moscow has noticed. 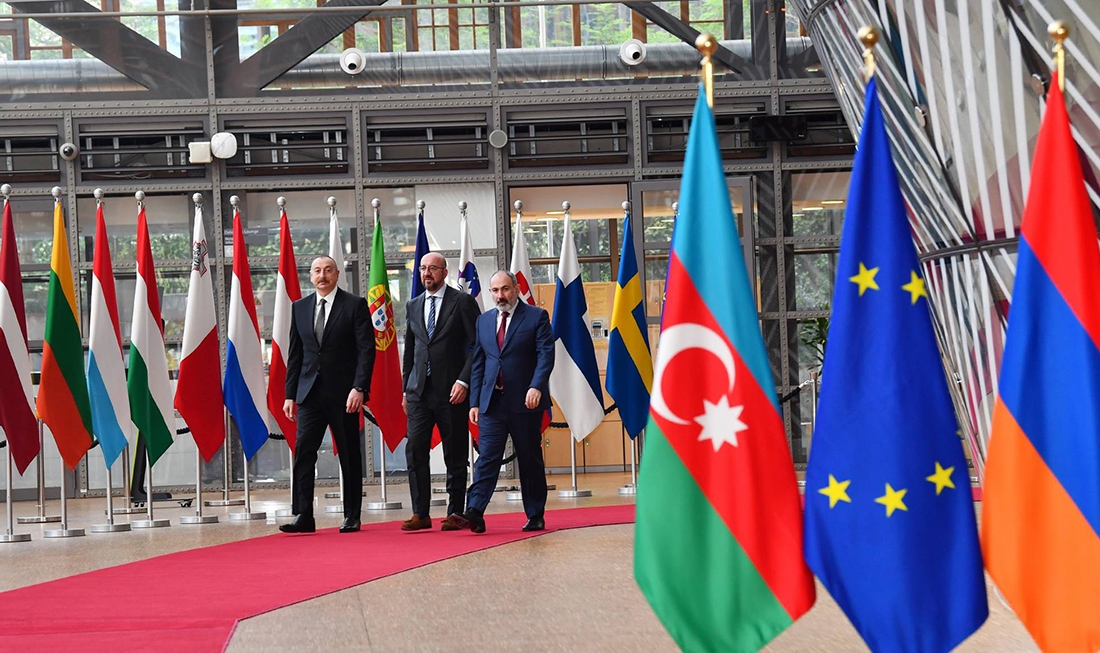 The leaders of Armenia and Azerbaijan meet with EU President Charles Michel in Brussels on May 22. (president.az)

The leaders of Armenia and Azerbaijan have met for the second time in a row with the mediation of the European Union, as Brussels appears to be assuming a key role in peace negotiations that had previously been dominated by Russia.

President Ilham Aliyev of Azerbaijan and Prime Minister Nikol Pashinyan of Armenia met on May 22 in Brussels along with EU President Charles Michel. It followed another meeting in April, also in Brussels and with Michel. And it seemed to have led to a significant breakthrough: The first, long-delayed meeting between commissions from each country tasked with delineating and demarcating their mutual border took place two days later.

The emergence of the EU as a significant platform for negotiations comes as Russia’s role appears to be declining. It was more than half a year ago, in November, that Aliyev and Pashinyan last met together with Russian President Vladimir Putin, who brokered the ceasefire that ended the 2020 war between the two sides and then dominated the diplomacy of the early post-war period.

Russia, however, is not being pushed aside entirely. The 2,000-strong peacekeeping force that Russia has maintained in Karabakh since 2020, as well as overall close ties with both countries, ensures that it will continue to play an indispensable role. The second meeting of the border commissions will take place in Moscow “next week,” Russian Deputy Foreign Minister Andrey Rudenko said on May 25.

The dual negotiating platforms have emerged as divisions between Russia and the West have deepened because of the war in Ukraine. That has accelerated processes that began even before the war, as the role of the Minsk Group of the OSCE, the body that had been a mechanism for joint Russia-West mediation of the conflict for decades, had significantly declined.

“I see this as an initiative from Europe, which now holds all the cards,” Russian foreign policy analyst Arkady Dubnov told the Azerbaijani news website Haqqin. “This isn’t very comfortable for Moscow, but it is too busy in Ukraine and of course that is significantly weakening its position.”

The rise of the EU holds an obvious appeal for Azerbaijan, where there is a sense that Russia’s agenda may be dominated by a wish to maintain its troops in the region. According to this line of thinking, Moscow may be less interested in helping the two sides work out an agreement to end the conflict that would render the peacekeeping mission unnecessary.

"The Armenia-Azerbaijan conflict was never part of [the agenda of EU-Azerbaijan relations] because the Minsk Group dealt with it and the EU was a little bit distant,” Aliyev said at a recent conference. “But now, it is also on our agenda along with the issues like trade, energy, transportation, humanitarian issues and issues related to democratic development. So, we consider the EU as a fair broker and welcome the efforts. […] Brussels has now become my main travel destination."

For Armenia, the growing EU role is more ambiguous. Many Armenians noted that Michel, in his statement following the most recent meeting, used the term “Karabakh,” preferred by Azerbaijanis, rather than “Nagorno-Karabakh,” which Armenians favor. They connect that to a recent landmark speech in which Pashinyan said that the “international community” was asking Armenia to “lower the bar” on the territory’s status, which was interpreted as laying the groundwork for significant concessions on the territory, which Armenians have controlled since the first war between the two sides in the 1990s.

At the same time, it’s difficult for Yerevan to say no to EU initiatives: Brussels is providing significant financial support to Armenia, including a new 2.6 billion euro investment package, which Michel and Pashinyan highlighted in their meeting in Brussels before the trilateral event with Aliyev. (Azerbaijan, meanwhile, is getting a parallel 2 billion euro package.)

Both Armenia and Azerbaijan also are happy to have the EU to act as a geopolitical counterweight against Russia, which remains the dominant power in the region.

Russian officials have expressed displeasure in being shunted aside. Foreign Minister Sergey Lavrov complained that Russia had been “canceled” from the Minsk Group, which is chaired by the United States, France, and Russia. Ministry spokesperson Maria Zakharova criticized “the shameless attempts of Brussels to appropriate” agreements that Russia had already helped the two sides reach.

“Now we have two separate platforms: the West and Russia,” Benyamin Poghosyan, head of the Yerevan think tank Center for Political and Economic Strategic Studies, told Eurasianet. “Russia can object but they understand that they can’t simply ban Armenia or Azerbaijan” from working with the EU, he said.

The EU and Russia share many of the same priorities: delineating and demarcating the Armenia-Azerbaijan border, reopening transportation links between the two sides, and eventually reaching an agreement to end their decades-old conflict.

But on the issue of Karabakh’s status, the two mediators may diverge. “The EU wants Nagorno-Karabakh's status to be determined in the process, understanding that the status after the defeat in the war can mean Nagorno-Karabakh getting some formal or informal autonomy within Azerbaijan,” Poghosyan said. “Russia is not interested in this because if Armenia and Azerbaijan agree on a status, Russia’s peacekeepers become irrelevant. Russia’s goal is a permanent presence in Nagorno-Karabakh.”

The EU may offer more of a carrot to Russia’s stick, said Fariz Ismailzade, the vice rector of Baku’s ADA University. “Both processes emphasize the same issues – border delimitation and a peace agreement,” he told Eurasianet. “But the EU mainly uses soft power and financial incentives, while Russia is perceived as a hard power, especially after the Ukraine events.”

The border commissions were supposed to meet in Moscow on May 16-17, Armenian Foreign Minister Ararat Mirzoyan said on May 12. The meeting never took place, and while there was no official explanation, on May 18 Aliyev accused the Armenians of dropping out of the meeting. He used a date of April 29 for the meeting, however, so it was not clear if he was talking about the same meeting.

The May 24 meeting of the border commissions took place at an unspecified spot on the Armenia-Azerbaijan border, which was an attempt to reduce Russia’s influence, said Karabakhi Armenian analyst Tigran Grigoryan. “I think the goal to meet at the border is to decrease Russia’s role on the process,” he told local news site Civilnet. But, he added, Russia cannot be excluded from the process, for technical reasons if nothing else, because it has access to the most detailed maps of the region. “There is a dependence on Russian support at least when it comes to the maps,” Grigoryan said.

Meanwhile Aliyev, Pashinyan, and Michel are planning to meet again in July or August, Michel said.