Tusk hails Tajik leader for his "strength, courage and goodwill." 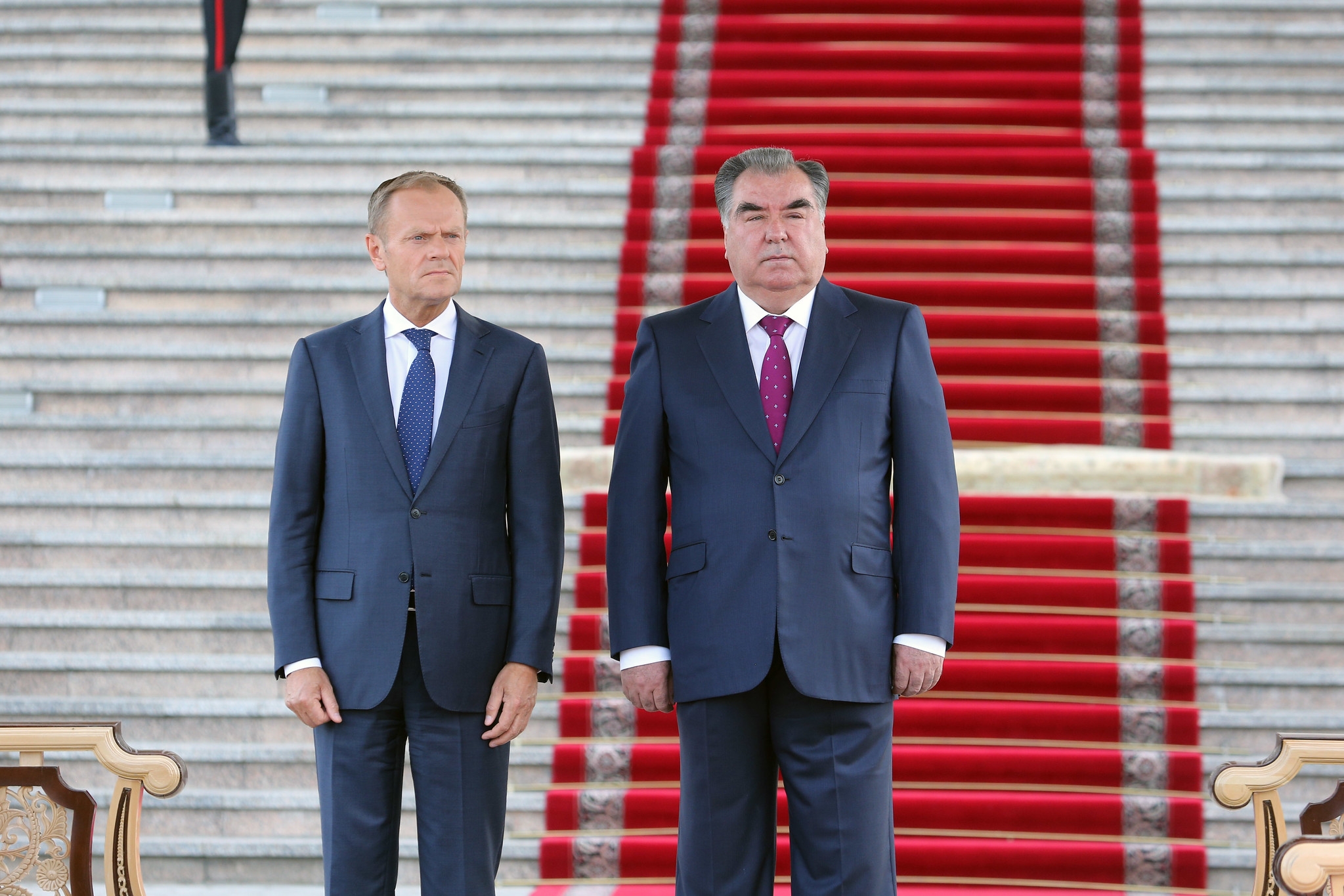 Goodfellas: Tusk and Rahmon in Dushanbe on May 30, 2019. (Photo: Tajikistan presidential administration)

The president of the European Council kicked off his tour to Central Asia in Tajikistan by glossing over the rapid shrinking of that country’s fundamental freedoms and shutting out queries from reporters.

In his only public statement while in the country, Donald Tusk showered Tajik President Emomali Rahmon with praise and expressed certainty that his leadership would ensure a bright future for civil liberties.

“The highest goal of every politician is to ensure security but also human rights and freedoms,” Tusk said on May 30, addressing Rahmon in person. “To achieve that, strength, courage and goodwill are needed. You have it all, Mister President.”

Tusk did not address any of the multiple instances in which Rahmon’s regime has in recent years presided over an intense and often violent repression of basic rights.

In its most recent annual survey on Tajikistan, Human Rights Watch, or HRW, lamented the worsening of the country’s “abysmal human rights record” in 2018.

“Tajik authorities jailed government critics, including opposition activists, journalists, and relatives of peaceful dissidents abroad, for lengthy prison terms on politically-motivated grounds. The crackdown on freedoms of expression, association, and religion extended to virtually any manifestation of dissent,” the rights group said.

By declining to publicly press Tajikistan on its chronic failure to respect political liberties and freedom of speech, among other fundamental rights, Tusk will have dismayed the exiled opposition, much of which has been hounded out of the country and forced to seek a haven in European Union member states, including Tusk’s native Poland.

The Europe-based National Alliance of Tajikistan said in a statement prior to Tusk’s visit that it hoped the European Council president would raise the plight of Tajik political prisoners.

“In the past six months, there have been two bloody tragedies in Tajikistan prisons … that killed dozens. Psychological and physical pressures, tortures and degrading treatments of the prisoners, widespread [in the] country’s prisons have led to such bloody events inside the prisons,” the alliance said in an English-language statement.

The most recent of those bloody incidents occurred just 10 days before Tusk’s arrival. In circumstances that remain shrouded in mystery, more than 30 people, almost all inmates, were killed in unrest at a prison in a town outside the capital, Dushanbe. Several of the fatalities were members of the banned opposition Islamic Renaissance Party of Tajikistan, or IRPT.

Opposition groups have demanded an independent investigation into those events, which the government has blamed on alleged Islamic State militants being held at the penitentiary.

Tusk made no mention of either that bloodshed or the 2015 ban of the IRPT.

The refusal to permit journalists to pose even vetted questions to Tusk during his visit will nourish concerns that international partners are not only tolerating the deep deterioration of media liberties in Tajikistan but are also actively abetting it.

This aligns with HRW’s assessment that the European Union and other international actors have “largely resisted imposing any serious policy consequences for Tajikistan’s abysmal rights record” and that they are “reluctant to alienate Dushanbe given its geo-strategic position along the border with Afghanistan.” Tusk’s end-of-visit remarks lent weight to that impression.

“One reason I came here, is that I know how important you are for the security of the entire region. I am grateful for the opportunity to have seen the border with Afghanistan today. And I was really impressed by how much you are doing to protect it,” Tusk said.

Justifying the decision to prevent journalists from putting questions to Tusk, a representative for the EU office in Dushanbe said that this was customary procedure “after a meeting without any specific agreement or decision.” Requests for clarification about why independent, unaccredited journalists could not attend Tusk’s briefing went unanswered.

It has become standard procedure for journalists in Dushanbe to be selectively excluded from events co-organized by international organizations and foreign governments.

When reporters for RFE/RL’s Tajik service, Radio Ozodi, sought accreditation to attend a May 16-17 roundtable on terrorism in Dushanbe that was jointly organized by the Tajik government, the United Nations and the Organization for Security and Cooperation in Europe, they were turned down.

Radio Ozodi has told Eurasianet that they were informed by the Tajik Foreign Ministry that they were unable to attend the roundtable because they applied too late. But Eurasianet has learned that other reporters, not from Radio Ozodi, were able to get accreditation quickly and simply on the eve of the event.

Indeed, there is mounting evidence that Radio Ozodi is receiving more frosty treatment from the government of late.

Eurasianet understands that four of the broadcasters’ Dushanbe-based correspondents are currently awaiting renewal of their Foreign Ministry accreditations. A representative for Radio Ozodi told Eurasianet that they have no precise insight into why the process is taking so long, but that they have been told by Foreign Ministry contacts that the State Committee for National Security is required to give its approval before accreditation can be granted.

Tusk’s tour of the region, which is time to coincide with the launch of the new EU-Central Asia Strategy, is also taking in Kazakhstan and Uzbekistan.