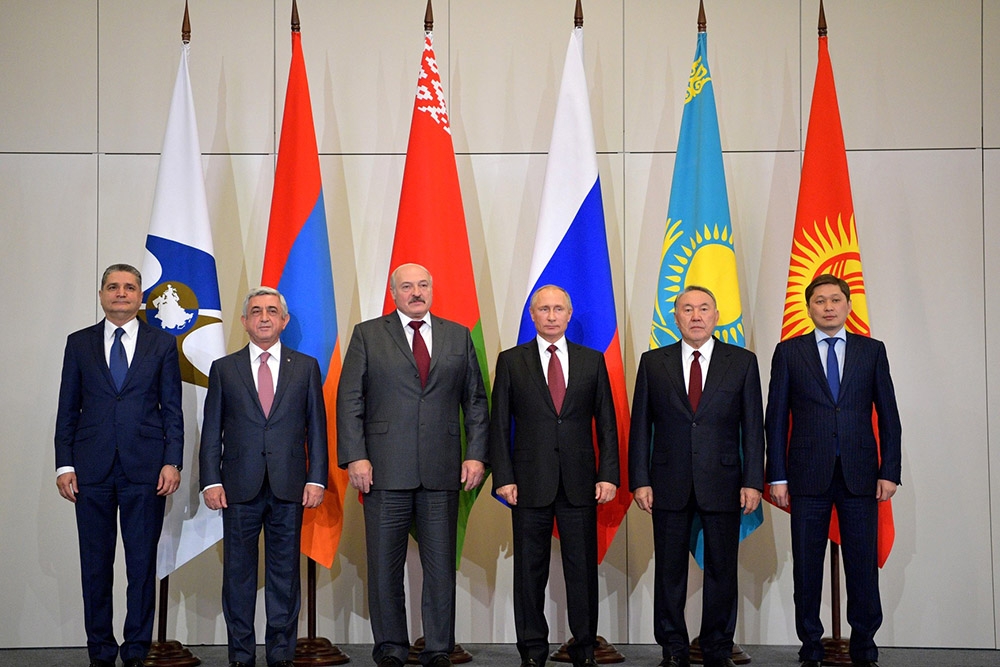 The squabble between Kazakhstan and Kyrgyzstan was relatively petty, but the cracks that their dispute exposed in the Eurasian Economic Union, a trading bloc to which they both belong, are proving harder than ever to paper over.

In mid-October, days after the outgoing Kyrgyz president lashed out at his counterpart in Kazakhstan with a barrage of insults, a low-intensity trade row erupted. For a period of around six weeks, Kazakhstani border officials intensified checks on cross-border traffic, causing massive delays in the process. Fruits and vegetables piled high in idle vehicles on the Kyrgyz side of the border rotted, leading to significant losses for exporters. At one point, Astana also banned the import of a range of dairy goods from Kyrgyzstan.

While such disputes are not unprecedented in Central Asia, there was something especially awkward about this crisis, given that both countries involved are Eurasian Economic Union (EEU) members. Russia, Belarus and Armenia are the other members of the EEU.

Former Kyrgyz president Almazbek Atambayev, who in November concluded a six-year term as head of state, was livid that the EEU as an organization failed to get involved.

“I am stunned by the total indifference and lack of concern to what is  going on from the leadership of EEU member nations and the leadership of Eurasian Economic Commission,” Atambayev said on October 18. “They could not give a damn.”

For all Atambayev’s irritation, however, the reality is that the EEU in its current form, which has uneasily joined its five mismatched members in 2015, has few efficient mechanisms for tackling such situations. While the job should fall to the bloc’s permanent institutions, in practice members look to figures like Russian President Vladimir Putin to act as a power broker.

“The Eurasian [Economic] Commission has no power to settle disputes. If the problem gets too big, it will go to the level of the Supreme Council for resolution, which means Putin (alongside the other heads of state),” Sean Roberts, an associate professor at George Washington University’s Elliott School of International Affairs, told EurasiaNet.org in an email.

Until Kazakhstan and Kyrgyzstan forged a truce in early December, their tiff may have been the most acrimonious to hit the EEU to date, although it was hardly the first. In February, Russia re-imposed its hard border with Belarus for the first time in two decades in a situation reminiscent of the Kazakhstan-Kyrgyzstan dispute. Russia had banned a number of food imports from western Europe, but suspected the Minsk was profiting from the embargo by using the permeability of EEU borders to re-export the contraband goods.  In a similar fashion, Kazakhstan justified its own blockade by arguing that Kyrgyzstan had been slipping hundreds of millions of dollars-worth of Chinese goods under the EEU duty curtain. Kazakhstan estimates that the scale of smuggling to Kyrgyzstan has cost the trading bloc around $1.8 billion in lost revenue.

If Kyrgyzstan’s leadership is intent on informally preserving at least a part of the re-export economy that flourished before accession to the EEU, it may be because the country was so dismally equipped to become a member in the first place.

“If the EEU really does envisage re-configuring the Kyrgyz economy away from its status as a transit hub for cheap Chinese goods, then this will involve sustained investment and a degree of commitment that other EEU member states and the Kyrgyz political establishment will find hard to make,” Roberts said.

Some rebalancing has already taken place, away from the re-export model to an increasing dependence on hard cash from abroad. Kyrgyzstan’s main commodity is its human capital. With EEU membership in place, Kyrgyz guest workers in Russia are not burdened by much costly bureaucracy, and the effect on remittances is clear to see. The amount sent home by Kyrgyz migrant laborers, most of whom live and work in Russia, rose to $2 billion in 2016 — up 18.3 percent up from the previous year.

The figure keeps rising. In the first nine months of this year, remittances reached $1.6 billion — that is $320 million more than over the same period in 2016.

Figures like those starkly demonstrate how Russia’s overwhelming dominance within the bloc means that any notions of political parity among members are trumped by reality. But as Chatham House argued in a research paper on the bloc earlier this year, the mismatch between Moscow’s oversized importance to its partners and its failure to properly monitor the affairs of the organization sometimes leaves it open to high-stakes bargaining.

“Following the launch of the [EEU], Russia has become less attentive. This has led to member states engaging in brinkmanship to achieve their goals. Balancing their own priorities against their ability to withstand Russian pressure is made possible by the sheer complexity of the organization,” Rilka Dragneva and Kataryna Wolczuk wrote in the paper.

One seeming case in point in relation to the Kazakh-Kyrgyz row is the fate of the Customs Code — the all-union rules applicable to how goods are to be moved across national boundaries among EEU member states. After much foot-dragging, Armenia, Belarus, Kazakhstan and Russia all ratified the code in their respective legislatures. But Kyrgyzstan has signally failed so far to do the same, despite the insistence from the Eurasian Union Commission that the rules are set to come into force by January 1. Although Bishkek’s loyalty to Moscow is almost complete these days, Kyrgyzstan’s stance underscores the EEU’s susceptibility to whims.

“In a community it is always the selfish interests of each country that takes priority and everything is revolved, to put it brutally, not by the institutions, but presidential administrations,” said Sergei Abashin, a Central Asia expert at the Russian Academy of Sciences.

The primary shortcomings of the EEU were engineered unwittingly — or perhaps inescapably — into the bloc at its very inception. The most glaring issues are grossly unequal economies, the highly personalized style of semi-authoritarian leadership typical in the post-Soviet space and the reluctance by any members to yield any significant say over internal policy decisions to supra-national institutions. This combination, said political analyst Denis Berdyakov, will indefinitely hamper the development of the EEU.

“Initially, all the elites wanted to feel the benefits of integration, but they didn’t want to relinquish a share of political sovereignty,” Berdyakov said. “Other global blocs are quickly growing strong and the EEU is just not keeping up with them.”