Readers are asking if YouTube has fully restored Eurasianet’s access to the platform after Turkmenistan got us briefly banned. Not entirely. For the record, here’s where things stand. 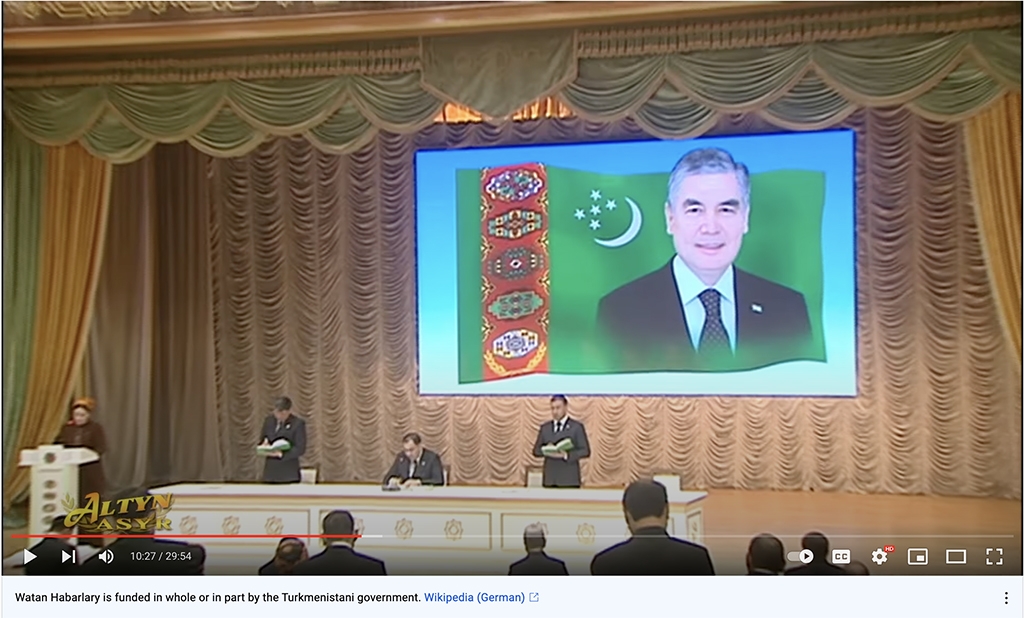 YouTube this week began identifying all videos posted by Turkmenistan’s state broadcaster with a disclaimer: “Watan Habarlary is funded in whole or in part by the Turkmenistani government.”

The change appeared amid Eurasianet’s efforts to restore its YouTube-hosted video content, which the company had taken down last month at the request of Turkmenistan – a totalitarian government that blocks YouTube within its own borders.

This story is not yet over: Google-owned YouTube is still censoring us at Ashgabat’s request, blocking one of our videos based on a specious copyright claim from Watan Habarlary.

Here’s the background: In September, YouTube informed us that Turkmenistan’s State Committee on Television, Radio and Cinematography had filed three copyright complaints against us for posting three clips from Watan Habarlary’s evening news bulletin. We had posted the clips – each just several minutes from an hour-long program – under Google’s fair-use provisions, adding contextual insights that inform and educate our audience.

Within 40 hours of sending its first automated message, YouTube disabled our account, taking offline several dozen videos, most of which have nothing to do with Turkmenistan.

With YouTube not responding to our attempts to contest the claims, and our entire video library inaccessible, last week we began protesting on social media and wrote about the faceless arbiters’ actions in our newsletter. Within three days, we received automated messages from YouTube telling us that it had rejected two of Watan Habarlary’s copyright claims pending a request for more information. That provisionally restored the videos (here and here) and unlocked our account.

Afterwards, Eurasianet queried YouTube about its policy for identifying authoritarian state media; the company has for several years marked other state-funded news outlets “to help you better understand the sources of news content.” End of background.

While Watan Habarlary is now marked accordingly, Eurasianet’s third video – of President Gurbanguly Berdymukhamedov doing donuts in a BMW – remains blocked**, which means we still have a copyright strike against us. (You can see the video here, by the way.)

We have tried multiple times over the last week to ask Google’s press office two questions: Why they hadn’t had the disclaimer about state control in the first place; and whether YouTube treats copyright claims from authoritarian governments differently than other claims – from a private broadcaster, for example.

We will update this page if we receive a response.

Small, independent online media like Eurasianet operate at the mercy of Big Tech, at least in terms of sharing content. It can be maddening to take on these giants alone. We are grateful for all the concern and support from our readers.

**Update: YouTube unblocked that third video on November 5 and told us it had "not found any copyright infringement" in our use of Watan Habarlary’s videos.