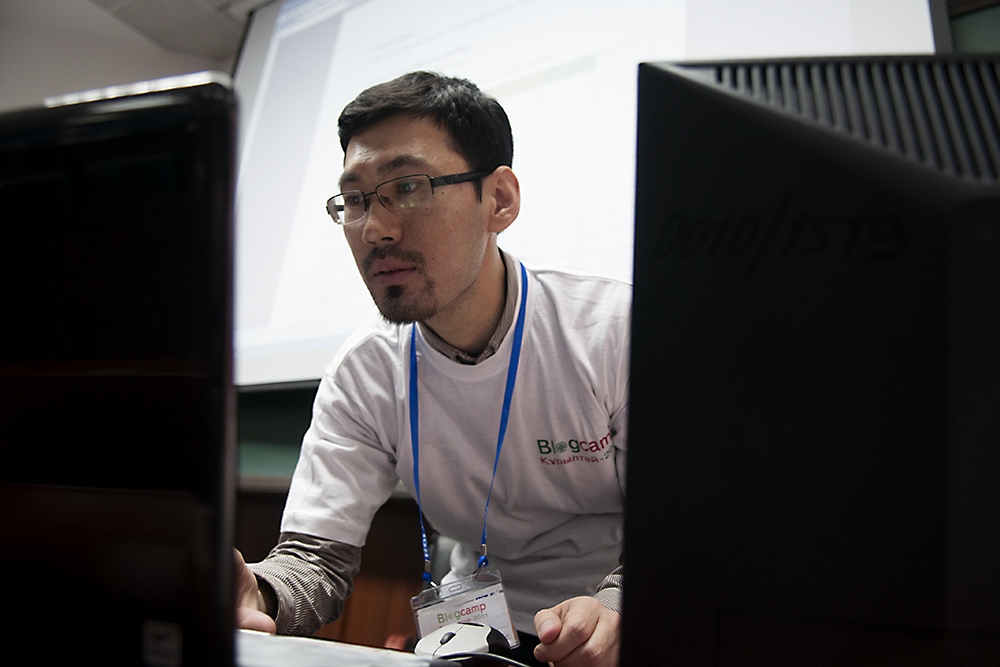 A technician sets up computers during a three-day camp for Kazakh bloggers in Almaty in March 2011. Blogging platform LiveJournal is one of several external websites currently blocked by the Kazakh government. (Photo: Dean C.K. Cox)

An obscure organization is urging governments across the former Soviet Union to shore up their “cyber-borders” in the face of threats from potential color revolutions, and consider blocking websites such as Google, Facebook and YouTube.

As appeals go, it was largely forgettable and prone to hyperbole. Yet the sentiment at the core of the message sounds like familiar background music as authorities in the region look for new ways to keep unwelcome messengers at arm’s length.

The statement, purporting to be the handiwork of an entity calling itself the Organization of Eurasian Cyber-Security, laid out its recommendations last week in a blizzard of emails to media outlets across Central Asia. The emails were an evident attempt to spark enthusiasm for online censorship.

The group warns citizens in the region, including business leaders and high-ranking officials, that their data is not secure because the Internet and other means of communication can be “under the control of companies and services representing another state.”

In particular, the message points a finger at Swedish telecommunications firm Teliasonera, active in a number of former Soviet countries and part-owned by the Swedish government. “Despite the fact that [Sweden] is not a NATO member, the country is actively cooperating with the bloc and participates in its information and cyber-projects such as the NATO Cyber ​​Centre, which was created to confront Russia,” the statement cautioned.

Little is known about the origins and the finances of the OEKB, as the cyber-security group is known according to its Cyrillic acronym. Its website does not list a date when it was founded, nor list individuals connected with it. Its avowed aim, according to the website, is “enhancing the security and sovereignty of the information and cyber space of the CIS states while simultaneously ensuring individual freedoms; uncovering and neutralizing foreign cyber-intelligence activity and its physical and electronic means.”

Experience shows that the cyber-security group is pushing at an open door. Governments across the region are already taking action to control the flow of information.

Tajikistan routinely blocks access to social media websites and even, on occasion, e-mail services like Gmail. Such unwritten bans typically follow the publication and circulations of materials deemed potentially incendiary by the government.

In Kazakhstan, authorities cite the fight against extremism as a motivation for blocking large numbers of websites, but the broad approach frequently hits targets that seem notable for being a platform for the exchange of views and information. Such examples include the website of the British newspaper The Daily Mail, regional news site Ferghana, and blog platform LiveJournal. Other recently blocked sites include zonakz.net and ratel.kz, which offer mainly political analysis, often critical of the government.

Gatekeepers in Kazakhstan can combine an often sweeping and crude approach to censorship with a level of technical sophistication that is rare for the region. Almaty-based media watchdog Adil Soz noted in a report published earlier this month that the government’s communications and IT committee actively seeks out and denies access to resources that enable Internet users to get around blockages.

In December, Kazakhstan’s telecommunications regulator posted a notice on its website to the effect that all Internet users would have to download security certificates that allow the government to intercept encrypted traffic, thus bypassing many instruments for online privacy. The notice mysteriously disappeared soon after technology blogs and several major media outlets seized on the announcement.

Uzbekistan and especially Turkmenistan are both Internet black holes, where many topics are off-limits for public discussion.

Freedom House’s 2015 Freedom on the Net report illustrates neatly the topic areas deemed off-limits for Uzbekistan: criticism of authorities, corruption, political opposition and social commentary. Accordingly, websites of international news outlets like Radio Free Europe/Radio Liberty and the BBC have been blocked for more than a decade. But the heavy hand is deployed even further than that would suggest and has led in the past to Wikipedia being banned.

Kyrgyzstan represents a relative bright spot in regard to online censorships, albeit with some exceptions. And yet it is there that the hazy strategy of joining hands across the region to forge a collective, ostensibly anti-Western, mass communications strategy has proven most promising.

Indeed, Russia in particular recognizes it is not enough to just deny media space to those that it perceives as strategic foes, but it is also necessary to advance an alternative and coordinated message — one predicated on a rejection of purported Western ills, such as the decline of family values and the embrace of sexual minorities.

“The Kremlin’s turn toward a conservative ideology offers a new playground for the Russian World concept, giving it some depth of content,” Marlene Laruelle, a professor at George Washington University’s Elliott School of International Affairs, wrote in a research paper last year.

The special status in Kyrgyzstan was evidently initiated at Moscow’s behest, as was made clear by the language in a document about the agreement published in the national media for the purposes of public discussion.

“As of today, the television channels of the Russian Federation are the most reputable and large-scale television stations that broadcast in Russian for millions of viewers worldwide,” the document read. “At the same time, a large part of the population of Kyrgyzstan prefers listening and viewing programs of Russian TV and radio companies, which have long earned the love of the local audience and enjoy popularity.”

Despite the fact that Kyrgyz society is broadly pro-Russian and, indeed, fond of Russia’s main channels, this “public discussion” did not go as planned and instead sparked a minor uproar on Facebook last month. Kyrgyzstan reportedly withdrew from the strategy, although skeptical media analysts speculated that it might still go ahead, minus the inconvenience of a public debate.