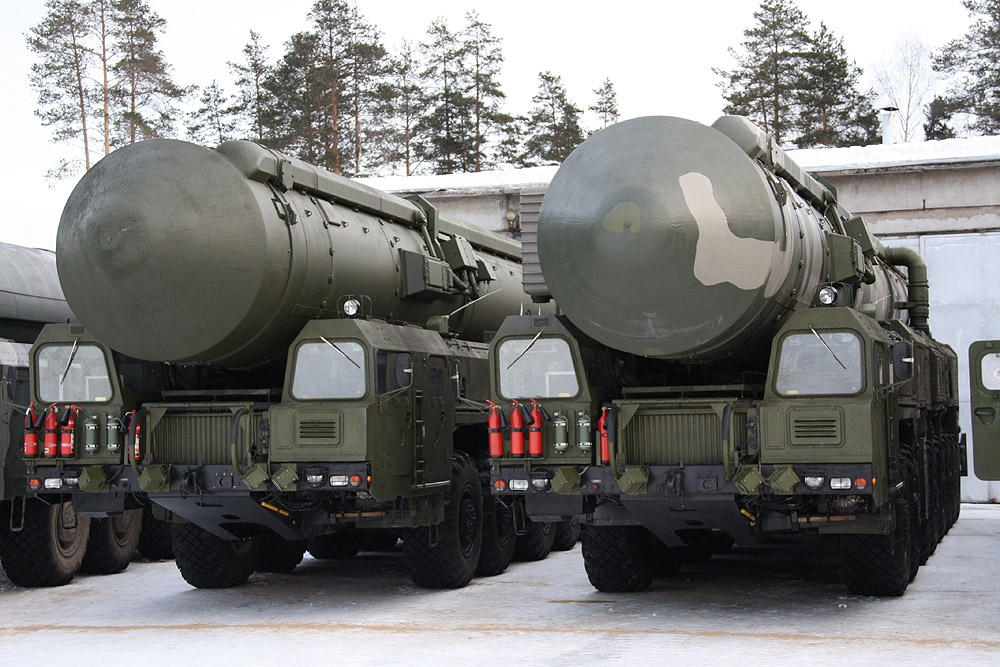 The road-mobile RS-24 Yars (pictured here) and rail-mobile Barguzin inter-continental ballistic missiles are weapons that are much more difficult for opposing forces to track and attack in the event of a conflict, given the vastness of the Russian Federation’s territory. (Photo: Russia’s Ministry of Defense)

In recently staged exercises, dubbed Zapad, Russian armed forces displayed a robust capacity to conduct sophisticated military operations. The upgrades made by ground forces that were seen in the Zapad maneuvers are also evident in Russia’s nuclear arsenal. The diversification of Russia’s nuclear options, along with the Kremlin’s strategic reliance on asymmetrical actions, heightens the risks of an atomic weapon being used in a future potential conflict.

Russia – taking advantage of the huge revenues generated by the export of natural resources in the early 2000s, especially oil & gas – has assiduously poured money into improving its armed forces. In having to play catch-up to the United States and its NATO allies, Moscow has always seen its nuclear arsenal as a critical asset from a national security standpoint.

In early 2017, Russian leader Vladimir Putin stated that 60 percent of the nuclear weapons in Russia’s strategic arsenal had been recapitalized. In keeping with a strategic approach designed to keep Russia’s opponents guessing – whether on the battlefield, or in the diplomatic arena – Moscow has invested heavily in developing nuclear-capable weapons and delivery systems that are highly mobile and much harder to detect than in the past.

Ground-based weapons in development or being deployed include the Sarmat heavy inter-continental ballistic missile (ICBM) and the RS-26 Rubezh ICBM. Russia has claimed the Sarmat is capable of getting past all US missile defense systems. Meanwhile, the currently undeployed, rail-mobile Barguzin ICBM, and the road-mobile RS-24 Yars transporter elevator launcher (TEL) are weapons that are much more difficult for opposing forces to track and attack in the event of a conflict, given the vastness of the Russian Federation’s territory.

In addition, Russia is developing a long-range, air-launched cruise missile in its nuclear Kh-102 and conventional Kh-101 versions. And to enhance the threat posed by such air-launched weapons, defense planners are improving Russia’s strategic bomber fleet. By 2016, Russia had installed new engines, navigation, and communications equipment on the TU-160 Blackjack heavy bomber. It is also upgrading avionics on the TU-95 Bear long-range strategic bomber.

In the naval sphere, Russia is developing nuclear-capable heavy torpedoes, such as the Status-6, for attacking coastal targets. The Russian Federation is also developing supercavitating torpedoes, such as the Shkval 2, designed to attack carrier groups and enemy submarines. Since 2015, the Bulava submarine launched ballistic missiles have been placed on the extremely quiet Borey subs.

In May of this year, it should be noted, Putin redirected funds intended for naval modernization for other purposes, specifically advanced research and development. Analysts believe that the funds will be devoted to nuclear-related projects aimed at countering US-NATO ballistic missile defenses via the deployment of advanced cruise missiles and hypersonic glide vehicles.

As it has gone about modernizing its nuclear capabilities, Russia has demonstrated a clear willingness to flout the rules of international treaties covering the development and use of weapons of mass destruction. In particular, a 2017 US State Department report on compliance with arms control pacts determined that Russia has routinely violated the Intermediate-Range Nuclear Forces (INF) Treaty, which dates to the late 1980s.

Such violations are part of Russia’s strategy to keep Western military planners off balance. In the same vein, the scope of the Zapad military exercises turned out to be far larger than Russian officials had announced before the start of the maneuvers, thus catching NATO representatives somewhat off guard.

Russia’s reliance on so-called ‘hybrid warfare” – in which the state’s immense propaganda apparatus plays a key support role in military operations – is extending into the nuclear realm. Prominent Russian officials in recent years have displayed a tendency to engage in nuclear saber-rattling.

“I want to remind you that Russia is one of the most powerful nuclear nations,” Putin said in 2014, responding to international criticism over Russia’s seizure of Crimea and the possibility of Western military support for Ukraine. “This is a reality, not just words.”

More recently, in the spring of this year, an influential Russian MP indicated that, under certain strategic conditions, Russia would be willing to engage in the first-use of nuclear weapons.

Ultimately, Russia’s actions and rhetoric surrounding nuclear weapons can erode the firewall between conventional and nuclear conflict. The erosion of that firewall, in turn, increases the risk that military jockeying could spark an unintended clash, and that such an accidental conflict could rapidly escalate from the use of conventional weapons to nukes.

It falls on NATO, the United States, and other interested parties to acknowledge the dangers inherent in Russia’s protean security strategy. These parties need to focus on and resolutely address Russia’s challenge to the existing international system and security architecture. Moreover, Western countries and their partners must work to deepen intelligence and counterintelligence capabilities, in order to counter maskirovka and active-measure tactics that are routinely used by Russia.

Joshua Noonan is an independent analyst based in Washington, D.C. He is a graduate of Johns Hopkins’ Paul H. Nitze School of Advanced International Studies.