In 2020, Azerbaijan won back many of the water resources it had lost to Armenians in the 1990s. But the biggest source still eludes it, and farmers are still struggling. 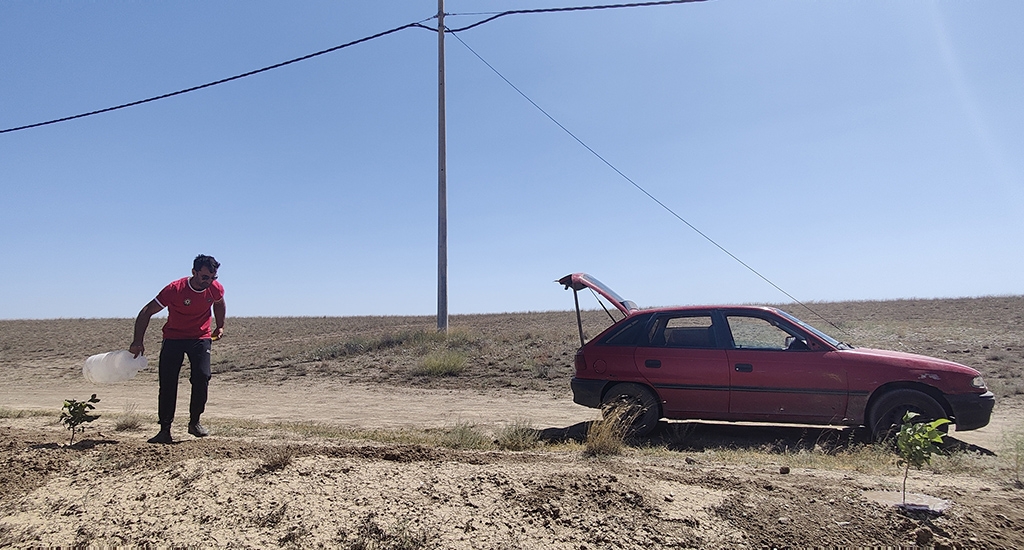 On the left bank of the Tartar River in central Azerbaijan, Ziya Mahmudov shows a visitor his “farm” – an arid 15 hectares where only the occasional scrub brush interrupts the expanses of dirt. He says he hasn’t worked it in years: “There’s no point planting something here knowing that it will die in the end.”

That’s somewhat of an exaggeration: Mahmudov did plant 45 walnut trees this spring. He waters them every other day by driving from his house to fill up barrels from an artisanal well, pouring out water at the base of each tree.

"They say water comes back to where it once came,” he said, citing an old Azerbaijani proverb. “But for 30 years water hasn't come to our canal."

Mahmudov’s problems are common among farmers in this area of central Azerbaijan, which has suffered from serious water shortages for years.

In some areas, along the Kura River, it’s because of poor management and excessive agriculture, including from upstream Georgia.

Along the Tartar River, though, the problem is a different one: The water traditionally came from the Sarsang reservoir. That reservoir was built in 1976 but lies in territory controlled by Armenian forces since the war between Armenia and Azerbaijan in the 1990s.

As a result of the second Karabakh war, in 2020, Azerbaijan regained many of the territories that it lost during the first war, including nine reservoirs and 30 of the 36 hydropower plants in the unrecognized Nagorno-Karabakh Republic.

But the most significant water source, Sarsang, remains in Armenian-held territory, a little more than 30 kilometers from the territory Azerbaijan now controls. With a capacity of 560 million cubic meters, officials have said it would be able to supply the districts of Tartar, Barda, Yevlakh, and Goranboy with all the water they need if it were under Azerbaijani control. 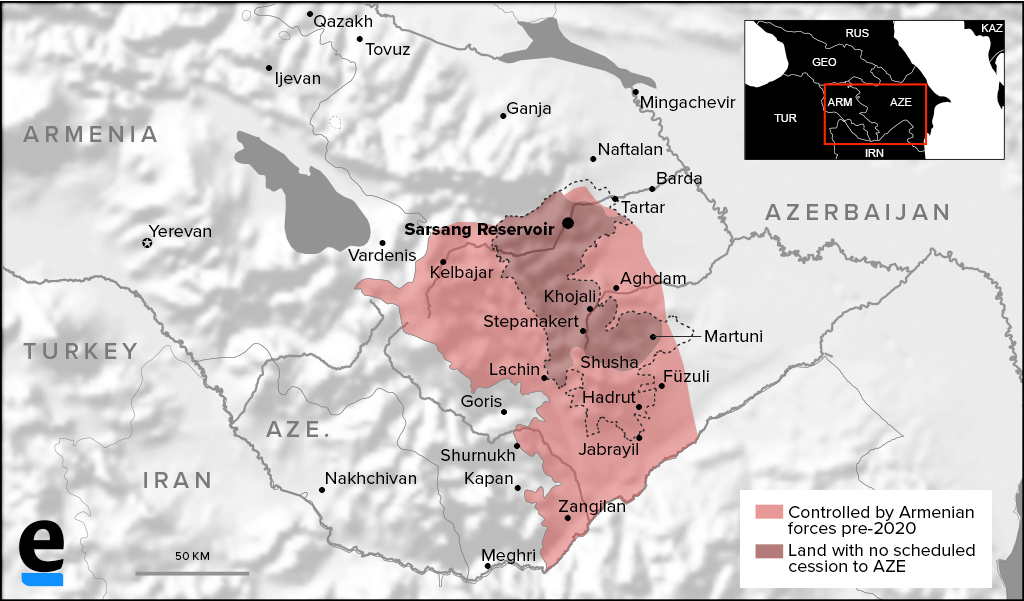 Azerbaijanis have long complained that the Armenians used Sarsang for power generation in winter, thus releasing the water when it was useless for agriculture. A 2016 report from the Parliamentary Assembly of the Council of Europe said that the Armenian authorities were “deliberately depriving” Azerbaijanis of the water as a “political tool.”

The return of one smaller reservoir, Sugovushan (which was known as Mataghis in Soviet times and under Armenian control), was celebrated widely by Azerbaijanis. When President Ilham Aliyev visited a year after the war, he extolled the strategic virtues of the reservoir, saying that it had improved Azerbaijanis’ water security.

“The importance of Sugovushan settlement is also that it is home to the Sugovushan reservoir. The reservoir is of great strategic significance,” Aliyev said. “During the occupation, Armenians cut off water in the summer and released it in winter. In the summer, our villagers and farmers were deprived of water, while in winter they released the water, causing natural disasters and floods. […] We are in charge here now. This year, water was supplied to Tartar and other districts using the Sugovushan reservoir for the first time in 30 years.”

But control of Sugovushan has yet to bear fruit for the farmers of Tartar. Its capacity of just under six million cubic meters is barely 1 percent of that of Sarsang. "Our generation who didn't see Sugovushan [because of the first war] had a different imagination of what it would be like with Sugovushan,” said the 37-year-old Mahmudov. “Like we could farm anything we wanted. Now we do have Sugovushan, and nothing much changed."

Aliyev, meanwhile, since the war has barely mentioned the current situation with Sarsang, the reservoir on which Azerbaijani farmers’ hopes rest.

There has been some small movement on Sarsang: In June, Baku and the de facto authorities in Karabakh quietly came to an agreement to allow some water to flow from Sarsang into Azerbaijan. The agreement calls for the Karabakh authorities to release 18,000 cubic meters of water per day to Azerbaijan, Mehman Karimov, lead engineer of Tartarchay Hydrojunction Operation Administration, the body managing irrigation in the region including Tartar, told Eurasianet. He added, though, that he wasn’t sure how long the agreement would hold up.

A source in the de facto Economy Ministry in Nagorno-Karabakh confirmed the existence of the deal to Eurasianet.

“Generally, the [Sarsang] hydroelectric plant was working in winter, and the rest of the time the reservoir was getting filled by water for producing electricity in winter. After the war, on Azerbaijan’s demands, the hydroelectric plant began to produce electricity in summer, that is automatically providing Azerbaijan with water for irrigation,” the source said on condition of anonymity. “The water used for power generation flows into the Mataghis reservoir, which Azerbaijan controls. But there can't be any written agreement on this, as Azerbaijan doesn’t recognize the current authorities” in Karabakh.

Still, the provision of water from Sarsang and Sugovushan now runs into another obstacle: the wasteful earthen canals that now transport the water from the reservoirs to farms.

“Water arrives from Sugovushan to Tartar in four hours, and by that time half of it has already seeped into the ground,” Mahmudov said. “The water that a tree drinks on one edge of a farm doesn’t even reach the other edge.” He says he was aware that water had begun to flow from Sarsang in June but that it wasn’t enough to make a difference for him, and he blamed the earthen canals.

Aliyev has acknowledged the problem of earthen canals.

“Of course, earthen canals do not enable the transfer of the required quantity of water, and losses occur also because of that. At the same time, this leads to salinization of the soil,” he said in an April 2021 speech. “Therefore, we must get rid of earthen canals. But you have to decide what technologies they will be replaced with. We must establish close contacts with the world's leading companies in this field and benefit from the experience of countries whose climate is similar to ours. There are countries where water resources are less than ours but productivity is much higher.”

About 70 percent of the country’s canals are now earthen, said Dilgam Sharifov, a spokesman for the Amelioration and Water Farming Company, a state firm that manages irrigation. "But progress is being made every year, replacing earthen canals with concrete canals. It's impossible to change all the earthen canals in one year," he told Eurasianet.

There is one concrete canal leading from Sarsang, dating from the Soviet era and now in a state of disrepair. But the area around it remains littered with landmines making it impossible to fix, Karimov said. 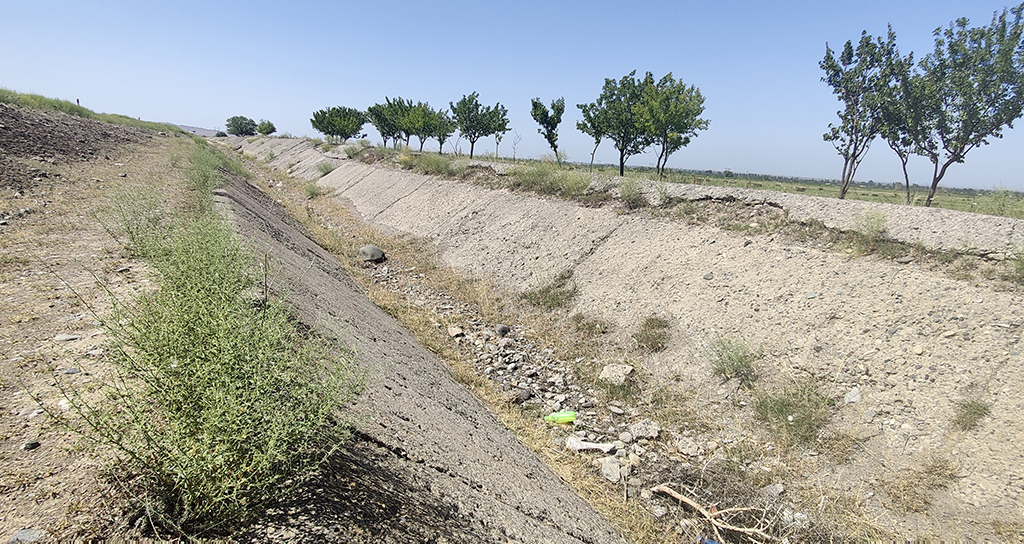 As he drives home after watering his walnut trees, Mahmudov muses on their chances. While he awaits water from Sarsang and proper canals, he thinks Azerbaijan ultimately needs more efficient irrigation methods, like those he has heard are used in Israel and other countries.

“At a time when the world is running out of drinking water, we need to move to different kinds of irrigation systems like drip irrigation and other things,” he said.

With additional reporting from Lilit Shahverdyan