Even for Favored Turks, Turkmenistan a Risky Investment 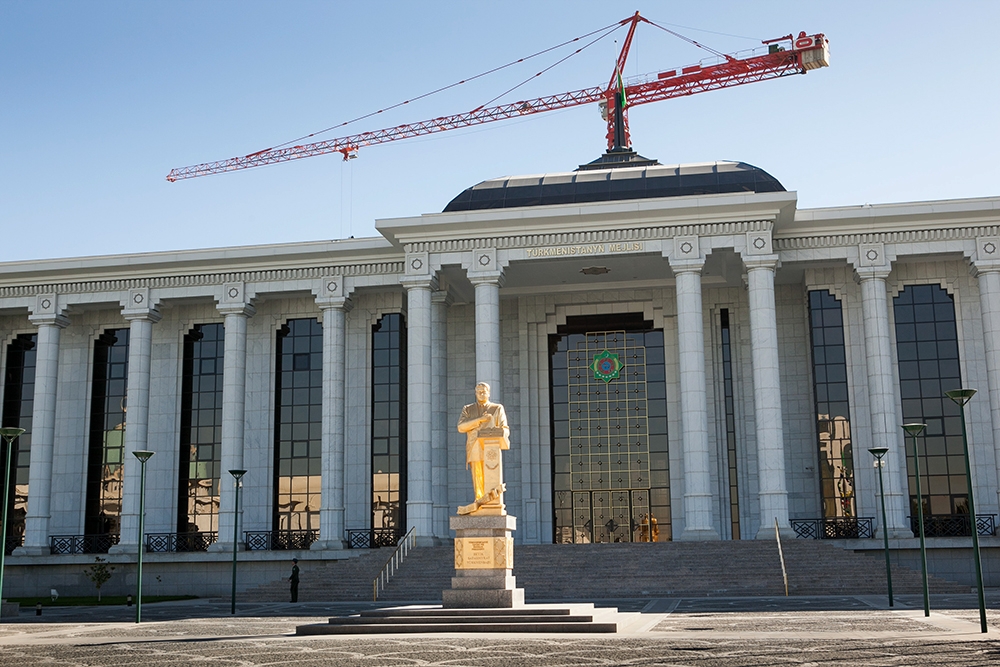 Construction of new government buildings continues behind a golden statue of Saparmurat Niyazov and Turkmenistan's Supreme Assembly in the capital Ashgabat in November 2010. Turkish companies have invested tens of billions of dollars in Turkmenistan, much of it in construction projects. (Photo: David Trilling)

Entrepreneurs from Turkey have enjoyed success in Turkmenistan, a market known mostly for natural gas rents and megalomaniacal vanity projects. But for all of their past business achievements, a growing number of Turkish investors are experiencing trouble in Ashgabat’s notoriously fickle business climate.

The preeminence of Turkish firms in Turkmenistan’s construction sector is highlighted by the Avaza project, a lavish $5-billion showpiece resort on the Caspian Sea built largely by Turkish contractors. Close by is the seaport of Turkmenbashi, where the Turkish firm Calik Holding began a $1.5-billion renovation in 2013. According to leaked US Embassy cables, Turkmenistan’s mercurial first president, Saparmurat Niyazov, treated the group’s chairman, Ahmet Calik, “like a son” and gave him citizenship.

Turkey was the first country to recognize Turkmenistan’s independence, and the two countries have a strong cultural connection. It was natural, then, for Turkish officials to prioritize strong Turkmen ties after the Central Asian state gained independence in 1991. “Concerted action on the part of successive governments in Ashgabat and Ankara led to the establishment of strong economic ties,” explained Luca Anceschi, a Turkmenistan watcher at the University of Glasgow.

In 2006, the US Embassy estimated that Turkish companies were behind 60 percent of construction projects in the country, largely under contracts awarded without tenders. By 2013, Turkish foreign direct investment reached $32 billion, accounting for one-fifth of total FDI, according to Turkey’s Development Ministry.

The growing number of complaints from Turkish firms about pressure and expropriation signals that the investment climate remains “unpredictable and largely inhospitable,” Anceschi said. Turkmenistan has been rattled in recent months by depressed prices for the hydrocarbons that make up 90 percent of exports, creating risks for all foreign investors.

Legal wrangles involving Turkish firms include a bizarre case of Turkish-born German businessman Adem Dogan’s egg farm, which he alleges was expropriated by Turkmenistan’s Ministry of Defense. In addition, there is a case in which 20 companies have reportedly banded together in a lawsuit against the Turkmen government seeking compensation for losses totaling $1 billion.

According to an industry expert who spoke on condition of anonymity, “much larger numbers” of Turkish firms, mostly working in the construction sector, are pursuing varying forms of legal action related to loss of business after 2006, when President Gurbanguly Berdymukhamedov took over as the isolated country’s enforcer following Niyazov’s death.

One is Muhammet Cap, whose construction firm Sehil Insaat is fighting Ashgabat for $300 million at the International Center for Settlement of Investment Disputes in Washington, DC. Cap and his sons fled Turkmenistan in 2012, after receiving threats, according to court documents. Investment Arbitration Reporter, a trade journal, said he was forced “to leave behind assets and equipment of a local subsidiary that were allegedly seized by Turkmen authorities.”

A ruling and a payout are two different things, of course. Turkmenistan is “not quick to write a check when it comes to compensating investors,” the industry expert said. He pointed to legal notes on proceedings related to the egg-farm dispute that indicate Ashgabat may have only recently paid a $495 million claim won by Bridas Corporation, an Argentina-based energy firm, back in 2001. EurasiaNet.org could not independently confirm if the payment has been made.

Turkey’s diplomatic mission in Ashgabat refuses to comment on ongoing legal proceedings between Turkish firms and the Turkmen government. It also does not confirm whether there are disputes lodged by Turkish firms in Turkmen courts. According to some interpretations of a 1992 Turkmen-Turkish investment treaty, Turkish companies are legally required to pursue a settlement via the Turkmen judicial process before seeking international arbitration.

On the surface, relations between Ankara and Ashgabat are warm. Berdymukhamedov presented President Recep Tayyip Erdogan a horse called Brother during a visit to Ashgabat last year. But a video uploaded to YouTube in 2011 by the opposition Chronicles of Turkmenistan website suggests that Berdymukhamedov is less enamored with Turkish firms than Niyazov was.

In the YouTube footage, Berdymukhamedov paces about a room full of mounted architectural sketches waving a stick as he lectures a minister: “These Turks try to trick you and pull the wool over your eyes,” he says, before recounting some of the problems he had had with Turkish companies as a minister. “They only want money,” he seethes.

There was no hostility evident at the 9th Turkmenistan International Investment Forum, held in Istanbul in March. The forum “generated considerable interest in [the] Turkish business community, judging by the sheer number of Turkish companies in attendance,” said Alex Melikishvili, a senior risk analyst at IHS, a consultancy.

The successes of other Turkish firms, including Calik Holding, “creates a powerful incentive” for others to follow, Melikishvili told EurasiaNet.org.