Moscow’s mobilization order exposed the absence of safety nets for students and other renters in Central Asia. 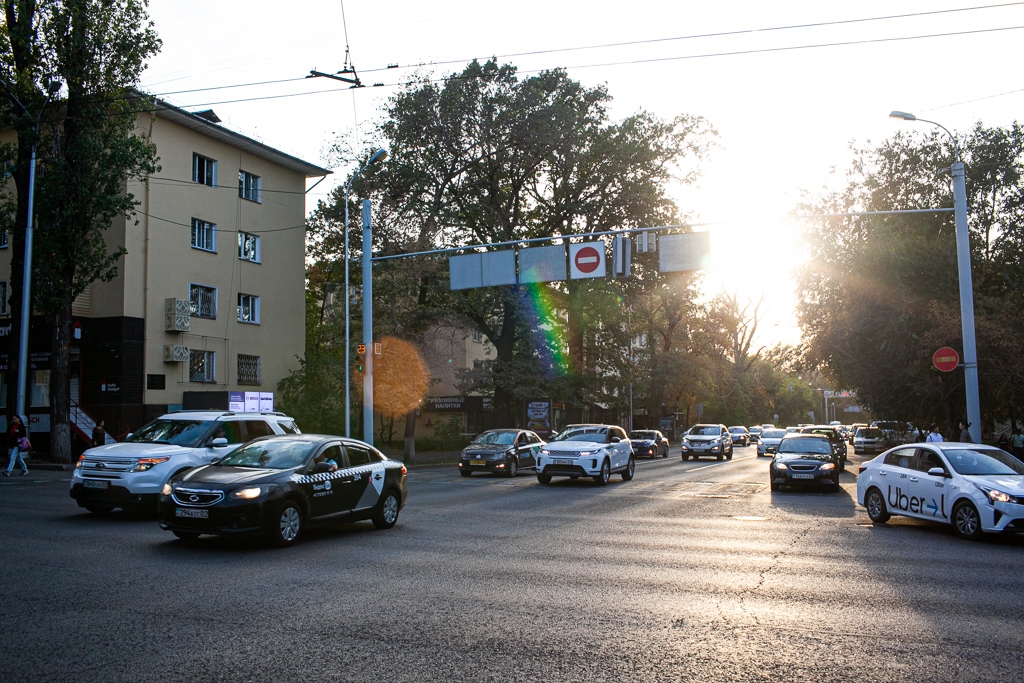 Rents in Almaty are still up about 25 percent since Russia announced mobilization. (David Trilling)

Gaziz is grateful he doesn’t have to fight in a dictator’s bloody adventure. But he still blames Vladimir Putin for making him homeless.

The university student had been living with three classmates in a small apartment in Kazakhstan’s financial capital for just one month when Russian men began massing on the border in late September, fleeing Moscow’s mobilization orders and upsetting the local economy.

As rents spiked overnight, he got an unwelcome call from his new landlady.

“After the mobilization announcement, she called us and said that the rent will now be 300,000 tenge, instead of the previous 220,000 tenge [$480],” Gaziz, who fears expulsion if his last name were printed alongside a complaint, recalled in an interview. The 36 percent hike was far more than their contract stipulated, which allowed for a 5 percent increase per year, but he couldn’t afford a lawyer to start arguing.

“We couldn’t find a better option,” Gaziz continued. “When we told her that we agreed to pay her 300,000 a month, she said her ‘friends from Russia’ were coming and so we had to move regardless. We figured it was just an excuse. And a day after we moved out, we saw her apartment listed … for 410,000 tenge.”

Such stories were common on social media across Central Asia following Russia’s September 21 mobilization announcement, which caused hundreds of thousands of Russian men to flee, most to former Soviet republics that do not require a visa of Russian citizens. In the capitals of Kazakhstan and Uzbekistan, rents rose over 50 percent in October, month-on-month, according to data published by rental listing platform Krisha.kz and the Uzbek statistics committee. In Bishkek, the evictions got the attention of an independent parliamentarian who said on October 6 that even civil servants were seeing rents rise by a factor of three.

“It’s a horror looking at the ads,” said a 29-year-old Bishkek resident after her landlady suddenly raised her family’s rent from 25,000 to 40,000 som ($475). The landlady pointed to other listings online and “explained that now this is the situation, that 25,000 is not accurate.”

On average, salaries are higher in Russia than Central Asia and some of the new arrivals quickly fell prey to unsavory characters. When one Russian made a TikTok video complaining about what he considered the poor living conditions he secured for $1,500 per month, the angry landlord kicked him out and kept the money.

Rents have since cooled, but in Almaty they are still about 25 percent higher than before the Russian mobilization, Krisha.kz estimated on November 10.

Though many Russians appear to have moved on, the money they brought has contributed to inflation, which has hit almost 20 percent in Kazakhstan, 12.2 percent in Uzbekistan and 15.4 percent in Kyrgyzstan.

And some have decided to stay. The number of Russians applying for Kyrgyz citizenship has jumped over four times so far this year, a Kyrgyz official said at a press briefing last month.

In this situation, there was little to protect renters – even those with contracts like Gaziz, who is now staying with a friend.

The president of the Kazakhstan Real Estate Federation, Yermek Musrepov, described the rental market as a hellscape in a recent interview with Tengrinews.

“There are often moments in Kazakhstan when they [landlords] take advantage of any situation and start driving up the cost of rent. This is a bad trend, because the inflated cost of rent, designed for Russians, begins to affect locals who have been renting apartments for a long time and suddenly they are forced to pay this inflated cost. We have a certain type of landlord who does not care about humanity. The most important thing for them is to get their winnings,” Musrepov said.

The morning after mobilization was announced, Aida (also a Kazakh student and also afraid to share her family name) got a call from her landlady, who told her to leave right away. Aida offered to pay more, but the landlady refused to negotiate. Aida has family in Almaty with whom she could stay, and she knows she is lucky: “I heard about students who had to move back to their hometowns because of a similar situation and it’s really sad that people give up their studies because they can’t afford the living expenses.”