Explainer: How did Kyrgyzstan’s ex-president fall so low?

Almazbek Atambayev, who faces astounding array of charges, is refusing to appear in court. We explain how he got here. 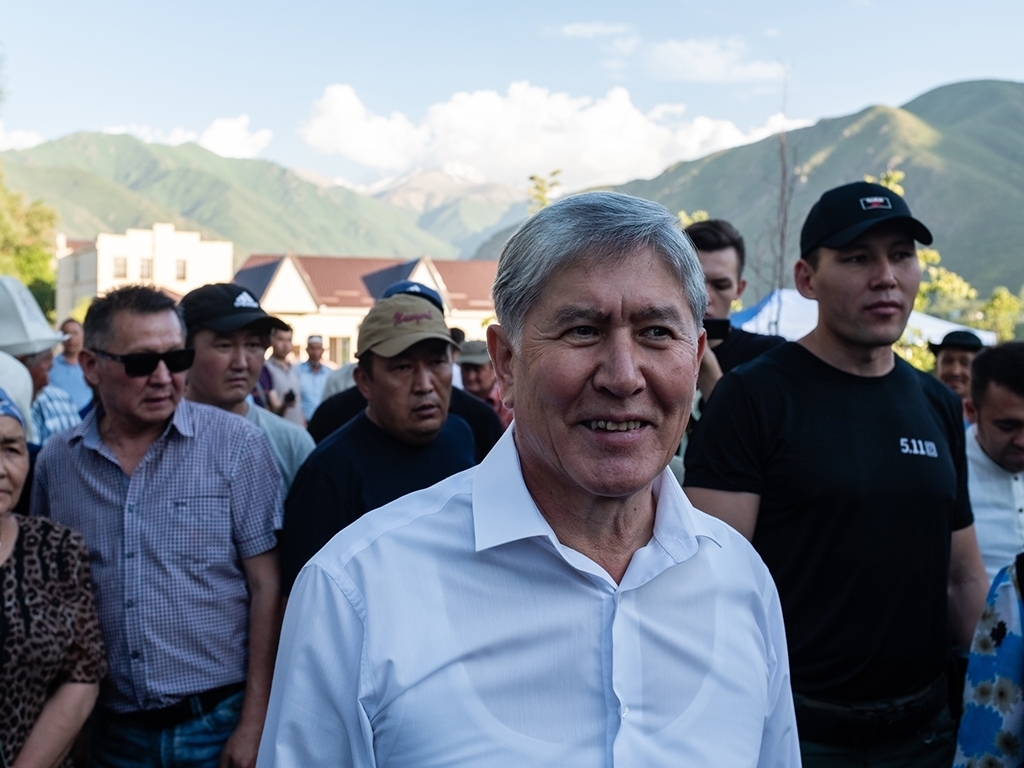 The petition to consider the question was put before the court by Atambayev’s remaining allies in the ranks of the Social-Democratic Party, or SDPK, which he helped found.

This looked like a last throw of the dice for a man who has done more than most to engineer his own downfall.

How did it come to this?

Under a version of the constitution adopted in 2010, Atambayev was permitted to serve only one term.

His six-year presidency, which lasted from December 2011 to November 2017, was a pretty unimpressive affair. The government implemented few of the sweeping reforms that most experts agree are needed to root out corruption and give the economy a kickstart that would benefit the population across the board.

As the end of his term loomed, Atambayev, always a spiky and irascible character, grew increasingly intolerant of criticism. Independent media felt the brunt of that testiness. Journalists were slapped with crippling fines. This sort of behavior would come to haunt him later.

Evidently concerned about falling prey to vengeful rivals once out of power, Atambayev devised an insurance policy.

First, he left several loyalists in key positions, such as the prime minister’s office and the security services.

More importantly, he scanned the scene for a successor who might prove a malleable patsy susceptible to control from behind the scenes. Enter one-time prime minister Sooronbai Jeenbekov, an Atambayev confidante who has managed over his career to land multiple top jobs despite his lack of evident charisma.

How did it work out?

He got Atambayev’s full support before the vote. The closest election rival, Omurbek Babanov, was run through the mud on state television.

International election observers noted that there had been a “misuse of public resources,” a clear reference to the ways in which Jeenbekov’s campaign was supported by the state. In the end, Jeenbekov would win 54.3 percent of the vote, thereby sailing past the 50 percent threshold needed to avoid the widely anticipated second round runoff.

For good measure, Babanov was then made the object of investigations at the hands of the security services.

No. And this is where Atambayev’s outsized ego comes into play.

In line with his hand-over-power-but-not-really plan, Atambayev had himself coronated head of the SDPK, which controls the largest bloc in parliament, at the end of March 2018. (He was formally required to relinquish his links to the party while serving as head of state). Not happy with just that, he used the party congress to take snide potshots at Jeenbekov, whom he clearly suspected of treacherously developing his own agenda.

Jeenbekov is a man of few words, but when acts, he does so decisively.

One after another, all of the ex-president’s holdover cronies would be removed from their jobs. Before April was out, Jeenbekov would dissolve the Cabinet headed by Prime Minister Sapar Isakov, arguably Atambayev’s most important ally. Isakov has fallen even further from grace since that time and is currently on trial on corruption charges.

But Atambayev should have been safe. As a former president, he enjoyed immunity from prosecution. How did that change?

Atambayev did not take his humiliation at Jeenbekov’s hands well, to put it mildly. Just to put him on notice, members of parliament publicly aired the idea of revoking the ex-president’s immunity.

This was almost certainly done at the behest of the presidential administration. The Kyrgyz legislature used to be a feisty place, but critics say it has succumbed to purely self-interested cronyism and that it obediently serves the interests of any given government, if that means it will be left in peace.

This only enraged Atambayev further. This past June, he pushed his luck too far when he slammed MPs with his trademark reliance on bodily functions-related imagery. “[Before], parliament was different, not the chimkyrik (snot) it is today,” he said, slipping from Russian into Kyrgyz for that key word.

By the end of the month, lawmakers had followed through on their threat, insisting that this was nothing to do with politics. Atambayev, they argued, had while in office committed a long list of crimes, including corruption, expropriation and aiding the flight from prison of a senior crime boss.

So, then what happened?

Suspecting that his arrest was imminent, Atambayev holed up at his sweeping country estate outside the capital, Bishkek. Dozens of his supporters were present around the clock. Atambayev’s detractors dismiss the notion that these people were genuinely his supporters, however, and argue instead that they were mostly hired toughs. Rocks arranged in mounds around the residence in the village of Koi-Tash were a clue that unrest would ensue.

When special forces commandos descended on Atambayev’s residence on the evening of August 7, it was not to arrest him, however. The government said law enforcement had lost its patience after three times summoning Atambayev for questioning and being rebuffed every time.

Either way, the operation was a catastrophe. Men guarding the compound successfully fought off the special forces. One special forces soldier would die from gunshot wounds.

Only after almost 48 hours of high tension and unrest, which had spread to the center of Bishkek itself, would Atambayev surrender and give himself up.

So what legal trouble is Atambayev facing now?

In the long run, he could be facing an astounding array of charges, ranging from embezzlement and abuse of office to kidnapping and murder.

For now, Pervomaisk district court in Bishkek is hearing a case against Atambayev on the charge that he connived in 2013, while he was in office, to release mobster Aziz Batukayev from jail.

Yet again, Atambayev is refusing to cooperate. He has elected to skip three hearings to date. His lawyer, Zamir Zhooshev, has told reporters that his client refuses to attend the trial as he believes it to be unlawful.

The ruling from the Supreme Court finding that lawmakers acted within their mandate by stripping Atambayev of immunity will in legal terms shred such arguments. It will not, however, do much to change the commonly held conviction that this has all been a political affair.

But because Atambayev, in all his high-handedness, made so many enemies over his time in power, few are willing to rush to his defense.