Explainer | What about the EAEU? Why Russia’s trade bloc is not a sanctions backdoor

The idea that the Eurasian Economic Union can help Moscow violate sanctions is exaggerated. 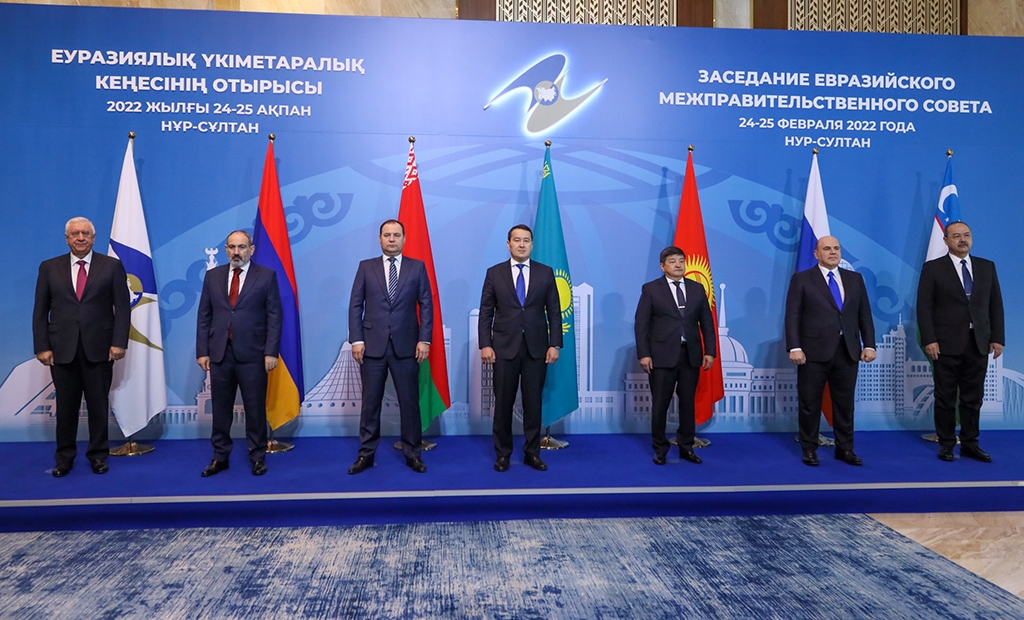 As Russia faces the most stinging sanctions regime imposed on a major global economy in modern times, one question often arising this week is to what extent President Vladimir Putin might employ the Eurasian Economic Union (EAEU) to mitigate the impact.

Formalized in the aftermath of Russia’s 2014 annexation of Crimea and the West’s initial sanctions, the EAEU is a free trade zone and customs union consisting of five ex-Soviet states: Russia, Armenia, Belarus, Kazakhstan and Kyrgyzstan. In theory, goods and labor can move about relatively frictionlessly, akin to the European Union’s single market. Notable customs barriers do remain, however.

After Moscow sent tanks into Ukraine last month, the West cut Moscow’s access to its foreign reserves, barred its central bank from borrowing, slapped crippling restrictions on its high-tech and defense sectors, and blacklisted a growing number of Kremlin cronies and oligarchs. Once unthinkable asset seizures are underway. Western firms are pulling out of Russia at a faster rate than they did during the Bolshevik Revolution. Asian economic powerhouses such as South Korea and Japan have signed on to the sanctions. Even Chinese-led lenders are spooked and implying they might comply with Western sanctions.

In this environment, there have been calls in the West to pre-emptively sanction the other four EAEU members to close any loopholes to this economic chokehold. The members are all dependent on Russia in one way or another, the thinking goes, so they owe Moscow. Only weeks ago, for example, Russian troops were patrolling Kazakhstan at the president’s invitation following unprecedented unrest. Armenia depends on Russian troops to patrol its borders.

The reality, however, is that the EAEU is unable to significantly temper the economic and financial disruption that Russia is already experiencing, and which will cause a substantial, and potentially protracted, recession across the region. JPMorgan on March 3 predicted that Russia faces a 35 percent contraction in the second quarter.

Before looking at what each member country could offer, first consider that there is little talk in the West of restricting the export of basic goods to Russia, so there is no need to find a workaround for food or consumer goods. The most biting restrictions are on computer and semiconductor technology – part of wider sanctions on the defense, aerospace, and maritime sectors. Technological and dual-use goods are already closely monitored by Western enforcement agencies; oversight will only grow as countries like Singapore and South Korea join the sanctions for the first time.

Armenia is the only EAEU member to have a significant trade agreement with the West: Its Comprehensive and Enhanced Partnership Agreement, which came into effect last March, lowers barriers in services trade and some licensing matters. That may seem like the most attractive backdoor for Russia on paper – but the geography (Armenia is the only member that does not share a land border with another) means any such imports would have to cross a third country.

Kazakhstan and Kyrgyzstan are major gold producers, and gold may be the one asset the Kremlin covets above all in this environment. Their gold could become more attractive to Russia, but insinuations Russia will seek a new gold-pegged ruble fail to take into account the reality of the modern global financial system, namely that the value of liquidity far triumphs that of any supposed safe haven asset. And at the end of the day, their joint production is less than half of Russia’s.

Kazakhstan could be a route for imports from China, but Beijing could just deal with Russia directly. Already Kazakh officials are showing no interest in flouting sanctions, instead beginning to redirect imports and exports away from Russian ports.

Belarus is itself under increasingly tight Western sanctions for President Aleksandr Lukashenko’s rights abuses and role in the invasion of Ukraine. Put simply, Minsk is not in a position to help.

But what about their banks?

None of the EAEU members can itself offer an economic lifeline or to serve as a financing hub to get around banking restrictions, such as the move to disconnect Russia from the SWIFT messaging system that underpins global transactions. The size of Russia’s economy and trade financing is comparatively too large – Russia’s GDP accounts for 86 percent of combined EAEU output. And any transactions with partners in countries that have signed up to the new sanctions regime would receive a hard “no” from all but the most incompetent compliance departments.

Sanctioned entities cannot merely be replaced in a transaction by another new entity, or that entity too will be sanctioned, as Russia’s Rosneft has experienced with Swiss subsidiaries.

Kazakhstan is the only member with banks capable of processing and handling some of the Russian export activity complicated by sanctions. But its banking sector is middling compared to Russia’s. Also, the Kazakh oligarchs who run them are under a spotlight after fueling unrest in January.

Finally, the EAEU members are unlikely to provide a bolt hole for oligarch and Kremlin official funds. Beautiful as they are, Belarus, Kazakhstan, Armenia and Kyrgyzstan lack the garish allure of Knightsbridge or the yacht docks of the south of France. More importantly, their political classes are certainly not safe from Kremlin pressure – stowing money beyond Putin’s reach has long been a key factor in the development of Londongrad and its ilk.

Russian businesses affected by the sanctions may well set up new subsidiaries in the EAEU. But this will likely just prove a masking exercise, and there are already plenty of jurisdictions – some even within the West, like the Channel Islands – that specialize in such efforts and which are, perhaps regrettably, not facing public sanctions threats from the EU, UK or U.S. governments.

The reality is that the plumbing and structure of the global financial system means that the EAEU is unable to dilute the pain of the most significant sanctions. China is the one country that could effectively sidestep the Western-led sanctions regime if it were so inclined. But there would be little reason for it to channel its efforts through the EAEU.