The group said it was avenging an Azerbaijani woman who was "persecuted" by the authorities for writing a Shiite slogan on the wall of her home. 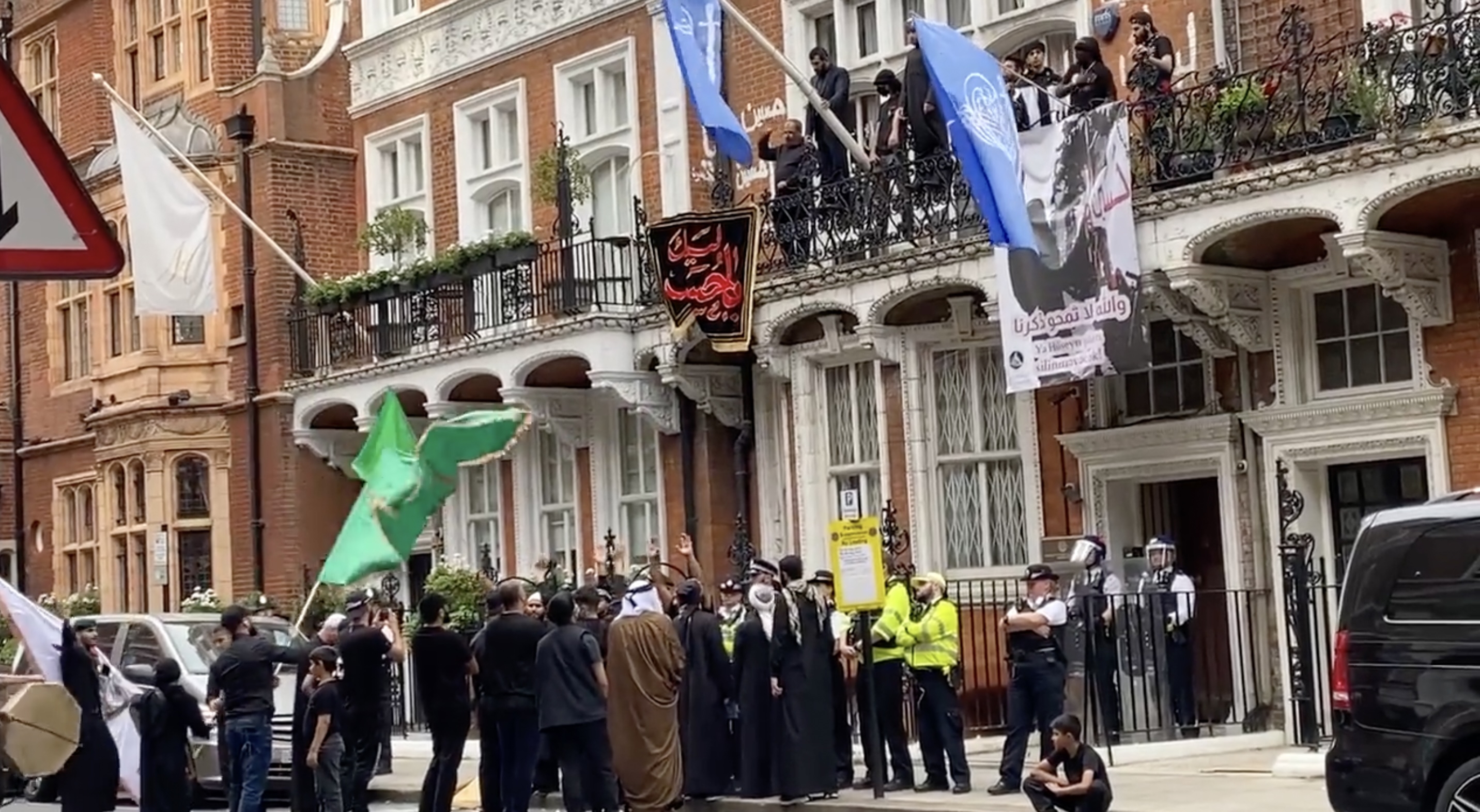 Screenshot of a social media video showing the attack on Azerbaijan's embassy in London (Twitter, @Mohalhasan7)

A radical religious group attacked and briefly occupied Azerbaijan’s embassy in London, chanting slogans and replacing the Azerbaijani flag with one of their own.

On August 4, several men stormed the embassy building, climbed up the balcony with a ladder, wrote slogans in Arabic on the wall, and hung religious posters. Eight people were arrested following the incident, London police reported.

The day earlier, the MSU had posted a statement on its website saying that the group’s leader, Kuwait-born Yasser Al-Habib, had been “informed” about the “persecution” of a woman in Azerbaijan who had written Shiite slogans on the outside of her home and raised a Shiite flag. According to the statement, Azerbaijan’s Interior Ministry said that the act amounted to “extremism” and that “raising any flag other than the national flag was unacceptable.”

The episode was not reported in Azerbaijani media, and there was no such statement on the Interior Ministry’s website.

The woman became a cause celebre on social media of Shiite activists, who called her Seyyide Shahla.

Al-Habib, the MSU statement continued, “considered this incident as an indication of the extent of the degeneracy of the regime of the disgraced dictator Ilham Aliyev, which is desperate to strip the religious and cultural identity of the Azeri people and transform it into a Western lifestyle mired in decadence, corruption and spiritual and moral poverty.”

The attack “by London-based radicals is unacceptable & barbaric,” Azerbaijan’s ambassador to London, Elin Suleymanov, wrote on Twitter. “It directly undermined the principle of diplomatic premises' inviolability. I am currently in Baku & grateful to see that our colleagues are safe in spite of the threat to their safety & security.”

While religious activists have gained some popularity in Azerbaijan since the collapse of the Soviet Union, their appeal remains relatively marginal and secularism is a deeply held value both among the government and the mainstream opposition.

“The attack of a group of religious people on the Azerbaijani embassy in Great Britain, climbing on the balcony of the embassy and throwing down the Azerbaijani flag is a barbaric act, regardless of the motive, and is universally condemned by our people,” Ali Karimli, the leading opposition figure and chairman of the Popular Front Party, wrote on his Facebook page.

The attack “helped to mobilize the public around the idea of secular statehood, civic loyalty to the country flag, history and institutions,” wrote Farid Shafiyev, head of the state-run think tank Center of Analysis of International Relations, on Twitter.

While Baku typically blames Iran for fomenting Shiite radicalism in Azerbaijan, the MSU and Al-Habib also have clashed with Tehran. An affiliated group carried out a similar attack on Iran’s embassy in London in 2018.

It’s not clear whether the group has any presence in Azerbaijan, and most of its messages have been written in Arabic. The most prominent Shiite radical group in Azerbaijan, the Husayniyyun, claimed that the attack was coordinated by the Azerbaijani and British governments in order to repress Shiite Muslims.

Azerbaijan’s government blamed the UK for lax security in allowing the attack to happen.

On August 5, Azerbaijan’s Foreign Ministry summoned the Charge d'Affaires of the British Embassy and expressed “a strong protest in connection with the attack by a religious radical group against the Azerbaijani embassy in London a day ago.”

The British Embassy to Baku, in its statement, condemned the attack. “The UK takes seriously its obligation to guarantee the protection of diplomatic missions in the country and the police are liaising with the Embassy of Azerbaijan to ensure that appropriate security measures are in place,” it wrote in a tweet.