A grassroots environmental campaign has implications far beyond the small Kazakh town where it started. 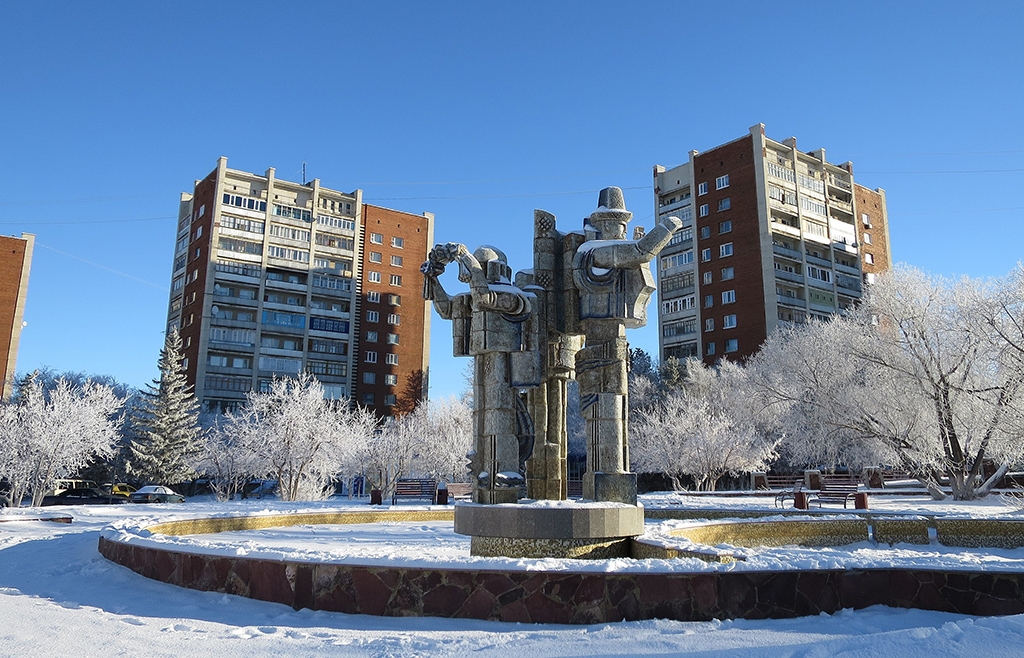 Stepnogorsk residents had not been told of the plan prior to the waste arriving in their town, but word soon got around. (Wikimedia)

While pro-government environmental groups were hailing a decision to relocate hundreds of tons of toxic waste from the shores of Kazakhstan’s Lake Balkhash, no one anticipated resistance in the provincial town earmarked as the destination.

Stepnogorsk and its surrounding district, encompassing around 70,000 people some 100 miles from the capital Nur-Sultan, is no stranger to dangerous industry.

In Soviet times the closed town was a hub for uranium mining and hosted one of the largest biological weapons facilities in the world. Factories, many of them heavy polluters, are dotted across the surrounding region.

Residents’ patience had long been stretched thin over pollution that they blame for health problems and emigration.

Then last year, they were confronted with plans for a new plant to incinerate the polychlorinated biphenyls (PCBs) – highly toxic chemical compounds rated as “probable human carcinogens” and immune-system suppressors by the U.S. Environmental Protection Agency – that were once stored at Balkhash.

“Maybe we have had enough of being destroyed by plants like these. Maybe we can have some textile factories or greenhouses?” Nina Orazbayeva, a microbiologist from Stepnogorsk district, whose parents both died of cancer, told Eurasianet.

The government and corporate forces that Orazbayeva and other activists faced down during their campaign against the PCB-incinerating plant were heavy hitters.

The decision to remove the waste from Balkhash was reportedly made by Aliya Nazarbayeva, the youngest daughter of former president Nursultan Nazarbayev (who still enjoys considerable power) and a formidable player in the green economy. The tender for the removal project was issued by Operator ROP, a privately owned recycling monopolist linked to Nazarbayeva, while the plan to recycle the waste in Stepnogorsk was backed by the Ecology Ministry.

The grassroots campaign that followed highlights the new challenges Kazakh authorities face as they pursue controversial industrial projects across the country, including a potential nuclear power plant.

The extent of the toxicity lying close to the shores of Lake Balkhash was not publicly known until the beginning of this century, when the non-profit EcoMuseum brought to light thousands of electrical capacitors containing PCBs at a secretive missile defense facility built during Soviet times but never commissioned.

In 2007, Kazakhstan ratified the Stockholm Convention, obliging it to destroy all persistent organic pollutants, including PCBs, by 2028.

Most of the capacitors were moved to Germany for utilization. But 300 tons of PCB-containing waste remained stored on Balkhash’s shores, with any major leak of the toxins raising the specter of an environmental catastrophe.

In late June 2020, Operator ROP, which collects recycling fees on goods including imported cars and cables, credited Nazarbayeva and her Association for Environmental Organizations with reaching out to solve the problem once and for all. Operator ROP had awarded a contract to a company called Ecolux-As to transport the waste to a storage facility in Stepnogorsk, it said. 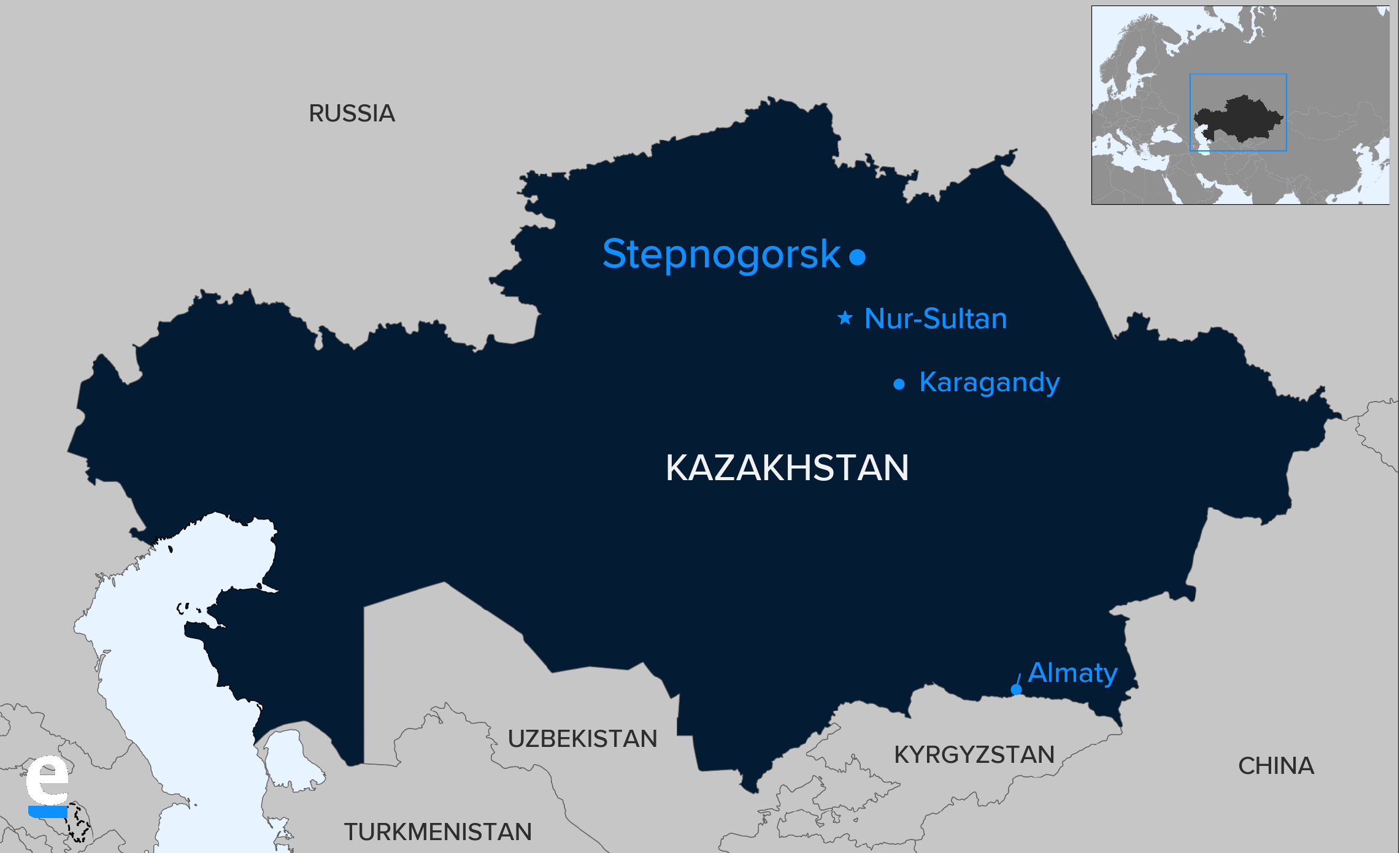 Stepnogorsk residents had not been told of the plan prior to the waste arriving in their town, but word soon got around.

Engineer Aleksandr Sizov and video blogger Maksim Ponomarev were among the first to visit the warehouse where it was stored. Ecolux-As invited them for a tour after they had sounded the alarm.

Sizov was horrified to find what he described as “a garage, converted into something else […] no sort of ventilation. There was no working fire alarm or security alarm.”

Days after Ponomarev published video of the site on his YouTube channel in June 2020, around 50 residents rallied in the town center. [Editor’s note: The author of this story, a resident of Stepnogorsk, participated in this and subsequent rallies.]

The company promised to remove the waste at a cacophonous briefing moderated by City Hall.

“You treat Stepnogorsk like something given, like an animal burial ground, where you can take anything you want!” yelled Viktor Molodovski, the combative editor of local newspaper Prestizh.

Then the company backpedaled.

Residents mobilized again, this time with a petition signed by 13,000 people.

In mid-July 2020, Ecology Ministry official Mansur Oshurbayev said that as part of a “listening state,” the ministry had heard the people, and would not allow the factory to be built in Stepnogorsk. “Not in the city, not in its surroundings,” confirmed Ecolux-As owner Roman Semikin.

Ecolux-As promised to find a new location for the factory by March 2021 and remove the waste from Stepnogorsk by July 2021.

In May 2021, with the deadline fast approaching, Stepnogorsk’s then-mayor Erkebulan Bayakhmetov informed a gathering of local officials and civic representatives that Ecolux-As had backed out of the memorandum.

Again, residents held an unsanctioned rally, this time under the slogan “we don’t know how to give in.”

Days later, environmental experts from across the country criticized the project during a public Zoom hearing hosted by the provincial government.

Local authorities finally gave residents what they wanted. Independent expert assessments had found “inconsistencies with the current environmental legislation” in the project proposal, the regional environmental department said in a statement.

Stepnogorsk is still home to the 300 tons of PCB-containing waste, with the storage lease set to expire in August 2022. It is not clear where or when the waste will be moved and where it will be processed.

A rival newspaper of Molodovski’s Prestizh, Novaya, which chose to give a platform to Ecolux-As and accused critics of hyping the threat, folded before the project was cancelled, its credibility in tatters.

It also took some time for Ponomarev, the video blogger, to learn to sleep again.

The video reports he published about the project earned him multiple anonymous threats, he told Eurasianet, as well as public smears that he was lobbying on behalf of a Russian company.

“I knew the threats weren’t coming from regular guys on the street,” Ponomarev told Eurasianet, blaming business and government figures.

According to Sergei Tsoi, a former Ecology Ministry official who now works as an Almaty-based independent consultant on environmental projects, the saga has ramifications well beyond Stepnogorsk.

Authorities can now expect similar localized resistance to a series of trash-burning factories slated for major cities, Tsoi said, as well as a nuclear power plant, if the government goes through with a highly controversial return to atomic energy.

“Authorities are constantly fighting fires [of their own making]. Stepnogorsk residents should have been involved in this process from the start. Instead [the authorities’ attitude] was, ‘We decided, you were told, now deal with it’,” Tsoi told Eurasianet.