Fans trickle in to Baku for beleaguered soccer match

Azerbaijan has proven a difficult destination for soccer fans. But those who made it report good experiences. 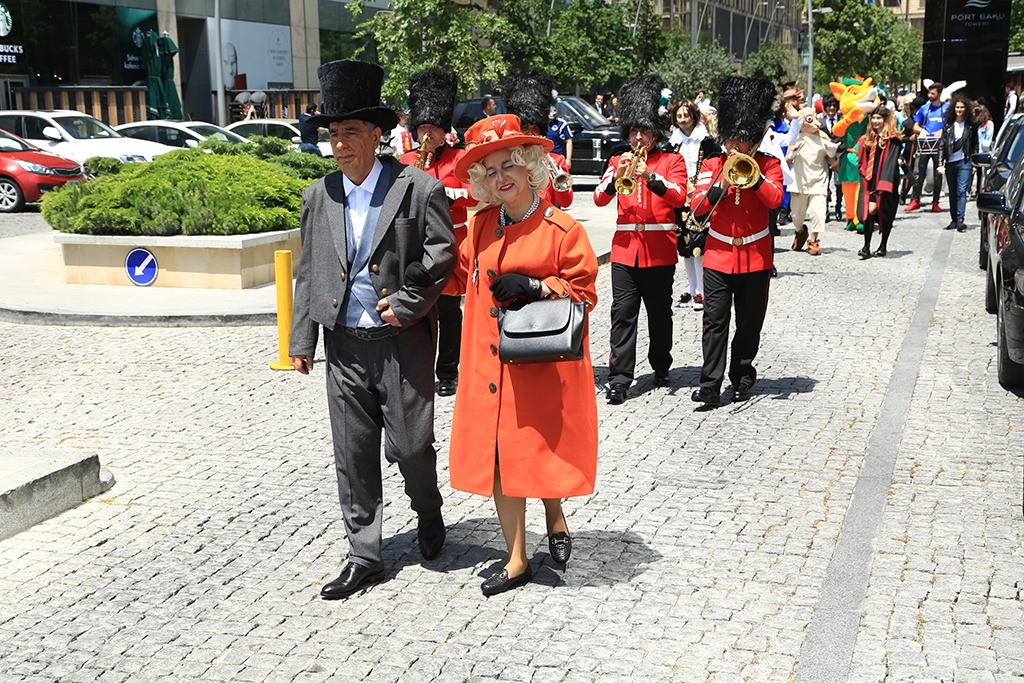 Baku put on a parade of “famous English heroes” ahead of the match (photo: UEFA)

Claire and Graham Baker are making their first visit to Baku. Fans of the English soccer team Arsenal, they have come for the team’s match in the Europa League final. But to get one of the limited direct flights from their home in London to Baku, they had to come several days ahead of the match.

“Having Arsenal in the final is a big deal for us, so we didn’t want to miss it,” Claire told Eurasianet outside central Baku’s Starbucks. But, she added, “I don’t really get why they chose Baku. It’s a lovely city – the people are nice, it’s clean, everything is in order – but I think they should have chosen another location.”

When Arsenal meets Chelsea in the May 29 match, it will be one of the most high-profile sporting events Baku has yet hosted. And while these sorts of events have been a major element of Azerbaijan’s efforts to raise its profile as an aspiring global hub, in this case it has instead highlighted the limitations of infrastructure and geography.

UEFA, the governing organization of European soccer, awarded Baku the right to hold the final in 2017. But it set aside fewer than 12,000 tickets for fans of the two finalists, Chelsea and Arsenal, because it determined that Baku’s airport and hotel capacity couldn’t handle any more than that.

Baku’s Heydar Aliyev Airport has been extensively renovated and regularly wins awards – the British airport consultancy Skytrax has repeatedly ranked it as the top airport in the post-Soviet space. But it has a capacity of only about 25,000 passengers per day. And international land connections are almost non-existent, save for a train connection from Tbilisi that would challenge all but the most intrepid soccer fans.

Citing “the geographical location and logistical capacity of airports in and around the host city, it was deemed that around 15,000 spectators would be able to travel from abroad,” a UEFA spokesperson said in response to controversy around the small ticket allotments. “Offering more tickets to fans of the participating teams, without any guarantee that they would be able to arrange suitable travel to reach Baku, was therefore not a responsible option,” the spokesperson added.

The airport issued a statement disputing UEFA’s calculations and said they could handle 10,000 passengers per hour. But Azerbaijani economist Togrul Mashalli disagreed. “Putting aside the Europa League, problems and delays occur even on normal days, when just two or three flights land at Baku Airport at the same time. Landing potentially 10,000 more passengers than the airport can deal with presents serious risks,” he wrote in in a report ahead of the match. “UEFA’s numbers clearly demonstrate that the country’s transportation system is not ready for this – not only internal transportation but international transportation, as well,” he wrote.

“We are bitterly disappointed by the fact that due to transport limitations UEFA can only make a maximum of 6,000 tickets available to Arsenal for a stadium with a capacity of well over 60,000,” Arsenal said in a statement. “We have 45,000 season-ticket holders and for so many fans to miss out due to UEFA selecting a final venue with such limited transport provision is quite simply not right.”

The teams reportedly failed to sell even their limited allotments. According to a report in the British newspaper The Times, Arsenal had only sold 3,500 of its tickets, and Chelsea 2,000.

“I have a mixed opinion of having the game here,” said George Tidiman, an Arsenal fan who flew from London on Ukraine International Airlines, an itinerary that required seven hours in the air and a stopover in Kyiv. “The people are nice and everything seems to be organized, but getting here wasn’t cheap. I have several friends back at home that would have liked to have come but it was too expensive,” he told Eurasianet.

The match organizers tried to arrange alternative transport with flights to Tbilisi and the train onward to Baku. But Chelsea announced that it couldn’t endorse that option for its fans, noting that “it is not a straightforward journey” and “it is not an option that the club feels it can endorse as a satisfactory alternative travel route for supporters still wishing to travel to Baku.”

For some fans, though, Baku was a relatively convenient location. David Mackay, an Arsenal fan who lives in Australia, flew via Doha. “Of course there are lots of fans in the UK, and I’ve read lots of things bashing the location choice, but I think sometimes people forget that there are fans all over the world,” he told Eurasianet. “Sure, direct flights are better, but having a few-hour stopover isn’t too big of a problem,” he said. “I think there was unnecessary fuss coming from England.”

The logistical difficulties were far from the only controversy that the match’s location presented. One of Arsenal’s key players, Henrikh Mkhitaryan, is from Armenia, a country at war with Azerbaijan. In spite of the Azerbaijani authorities’ guarantee of his security, he decided to skip the match, drawing attention – unfairly, many Azerbaijanis believed – to the issue of safety for Armenians in Azerbaijan. Ahead of the match, some reports suggested that police in Baku were scrutinizing fans wearing Mkhitaryan jerseys; one video from sports news site sntv of a fan being stopped had 3.5 million views less than 24 hours after being posted.

“Baku is nice, but now we don’t have Micki,” Graham Baker said. “I don’t know too much about the politics, but I think he should have played. Azerbaijan said he would be fine, and he didn’t really say why he wasn’t coming, but now we’re down a player. It’s a shame.”