Farmers in Kyrgyzstan try to capitalize on global quinoa fad

Getting Kyrgyz-grown quinoa onto the international market is proving tough. 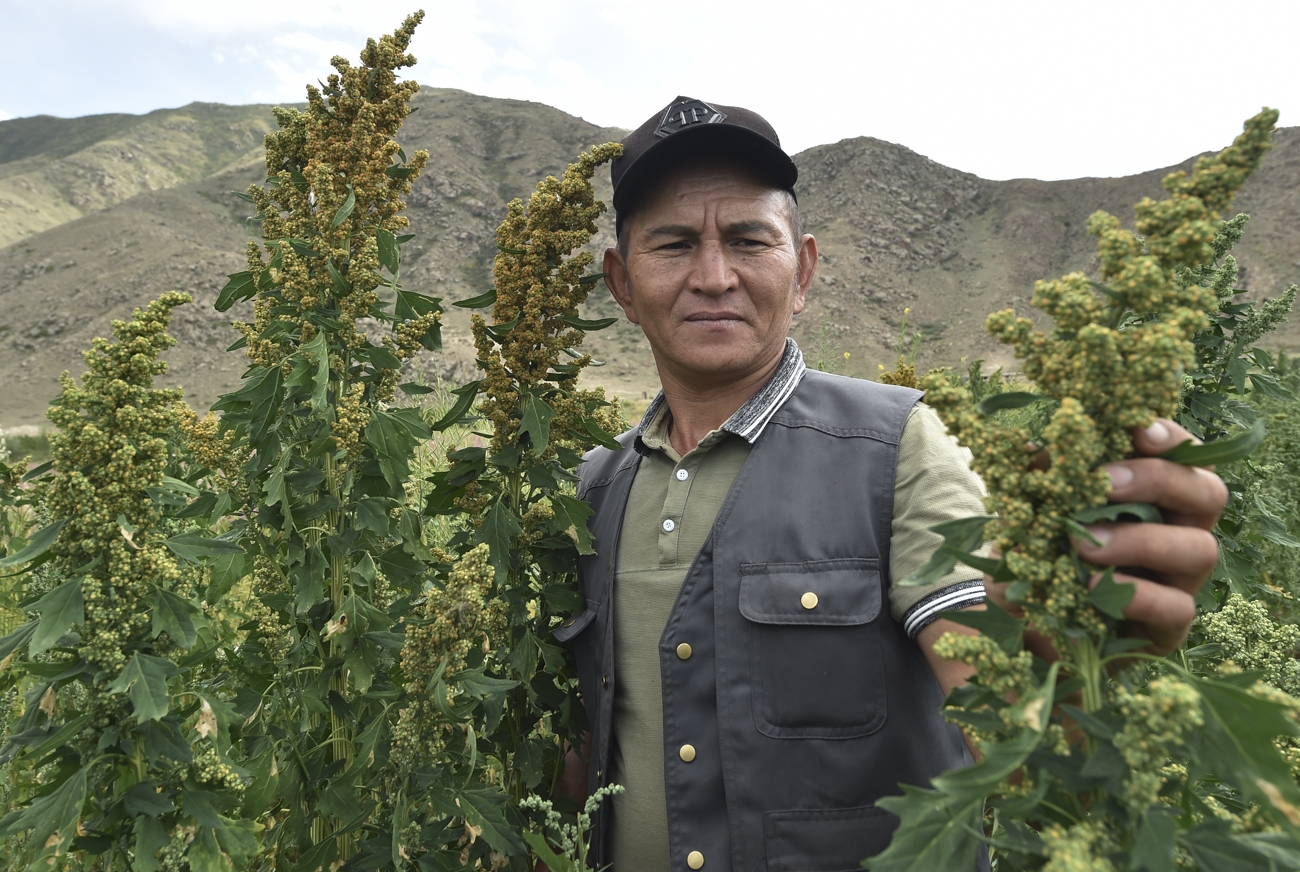 Step into a grocery store anywhere in Kyrgyzstan and ask for quinoa, chances are you will receive little more than blank stares.

All the same, one farmer on the southern shores of Issyk-Kul lake has for the past few years been trying his hand at cultivating this most trendy of grains.

Azamat Kaseyev, 44, got his first batch of quinoa seeds – the South American strains of Regalona and Titicaca – in 2012. The results have been impressive.

"The yield of this crop is quite high – if you sow 2.5 kilograms [of seeds] across one hectare [10,000 square meters], it yields one to three tons of quinoa,” Kaseyev told Eurasianet.

With the crop selling at anywhere between $2 and $16 per kilogram on international commodity exchanges, the returns have been robust, he said.

That, however, is where the problems begin. Getting Kyrgyz-grown quinoa onto the international market is proving tough and farmers complain the authorities are doing nothing to help.

Kaseyev’s efforts at the moment are on adapting the grain to local conditions and testing the crop in all of Kyrgyzstan’s regions. Quinoa has flourished most in the highlands and under certain temperature conditions. The plant likes heat in the daytime and cold at night.

The Tong district of the Issyk-Kul region, the Bakai-Ata district of Talas region and the foothills of Jalal-Abad region have been found to be the best locations.

Introduction of quinoa to Kyrgyzstan has been spearheaded by the Dubai-based International Center for Biosaline Agriculture, or ICBA, which co-organized an event in 2016 to explore new regions in which to grow the crop. Central Asia has proven particularly receptive. Neighboring Tajikistan and Uzbekistan too are now dipping their toes into quinoa cultivation.

Central Asian farmers are tapping into a global craze. If only eight countries were cultivating quinoa in 1980, that figure had risen to 75 by 2014. Twenty additional countries began sowing quinoa in 2015 alone. For all that, around four-fifths of global output is still accounted for by the plant’s native lands, Bolivia and Peru.

Enthusiasm in Kyrgyzstan is being tempered by a host of difficulties, however.

As Kaseyev explained, Kyrgyz farmers have no mechanical equipment for sowing, weeding, harvesting, threshing or processing the crop.

“The domestic market is not developed because quinoa contains a substance called saponin, which gives the crop a bitter taste. It is contained in the shell of the grain,” Mambetov said. “In order to get [the crop] onto the export market, it is necessary to learn how to separate out the saponin. But there is no equipment [for doing this] in Kyrgyzstan as yet.”

In these early years, there are also bound to be stops and starts.

Alisher Uraimov, a farmer from Jalal-Abad region who began growing quinoa around the same time as Kaseyev, suffered a dismal harvest this year. He sowed 32 hectares, but only five hectares gave any yield.

“We had a good harvest in previous years, so I increased my sowing area. But unfortunately, agriculture in Kyrgyzstan is a risky business. Because of the hot summer, this was not a very good harvest,” Uraimov said.

Uraimov said he is now in talks to sell around six tons of quinoa to Italian and German partners to whom he previously sold dry fruits.

Doing that will mean overcoming considerable bureaucratic hurdles though. Even if the local government were in a position to issue certificates of origin and quality for Uraimov’s quinoa, these would likely prove insufficient for the European market. Instead, Uraimov will have to summon a sanitary expert from Europe or Turkey, which could cost anywhere from $3,300.

“For one farmer, that is of course an insurmountable amount, but if all us farmers chip in, we could do it,” he said.

Industry experts say the government has provided no help in either developing the crop or assisting in export.

“We have just introduced scientists and teachers from the Agrarian University and employees at the Agriculture Ministry to this culture, but there has been little interest so far,” said Mambetov, of the FAO.

Kyrgyzstan’s unsettled political scene is blamed for this lassitude.

Roman Kovalenko, manager of the Ecoland health food store in Bishkek, complained it is farmers that are pricing themselves out of sales.

“They charge quite a lot as they know they do not have competition on the domestic market. And it is a major disadvantage that they have not learned to grind and process the grains, which are bitter as a result,” he said.

This is all a pity, as there is great potential, he said.

“I myself regularly eat porridge made with quinoa, because every 100 grams contains around 14 grams of protein. It is consumed by people on diets to lose weight and people who are on gluten-free diets,” Kovalenko said. “Kyrgyz farmers need to learn processing technologies and the demand will be huge, even on the domestic market.”