Days after the prime minister warned of menacing “men in black,” police detained several members of a right-wing group. 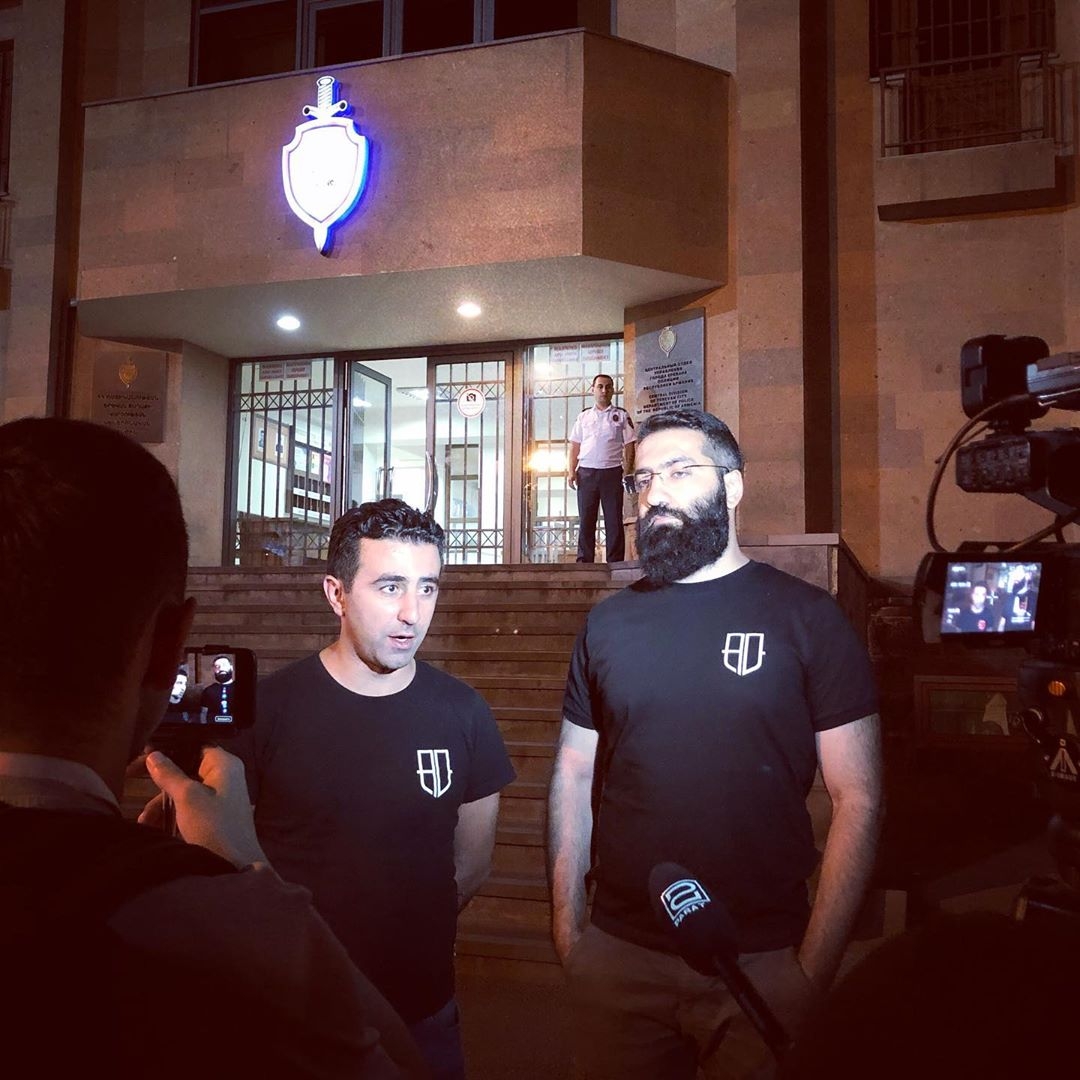 Members of a right-wing opposition group, Adekvad, outside a police station in Yerevan after being questions. (photo: Adekvad on Instagram)

Eleven members of a right-wing organization were detained two days after Prime Minister Nikol Pashinyan issued a dire warning about the group, accusing them of violent intentions. The heavy-handed treatment of the marginal group risks elevating their profile, some analysts warned.

The members of Adekvad, an anti-Pashinyan-Facebook-group-turned-political-party, were detained on the evening June 8, members announced on Facebook. They were held for about an hour and a half and were released without having been charged, Ruben Melikyan, a former human rights ombudsman for Nagorno-Karabakh who provided Adekvad with legal support, told the news website Caucasian Knot.

On June 10, one of the leaders of the group (and a former political ally of Pashinyan), Artur Danielyan, was arrested, according to a live broadcast from Adekvad's Facebook account. Danielyan was among those detained two days earlier.

On June 6, Pashinyan had issued an elaborate warning about an “organized campaign … preparing to solve political issues through violence.” In a meeting with government ministers he said there were groups of men clad in black walking menacingly around the center of Yerevan to create an atmosphere of fear, and said they were linked to “the former corrupt system.”

He also called on law enforcement to “give a very strong counter-blow to all such occurrences,” and used a fanciful fashion metaphor: “Those people dressed in black should be caught and changed into flower-patterned clothes, given bowties and sent back to the civilized way of life."

Pashinyan did not specifically name Adekvad, but the members clearly realized they were being targeted. During the day on June 8 they live broadcast a video of themselves walking the streets, wearing black Adekvad T-shirts.

A few hours later, several of them were detained. “Our members were not doing anything illegal and this kind of behavior means only one thing: this is political persecution,” the group said in a Facebook post. “This was without a doubt connected to the prime minister’s statement about men in black,” Melikyan said.

Some analysts agreed. “It must be said clearly: people were detained for expressing their opinion, not for their actions,” wrote analyst Hrant Mikaelian on his blog. “And this is not the first time the police have been effectively politicized and work exclusively for Pashinyan. This is an attempt to intimidate opponents of the government and more and more recalls the actions of [former Georgian president Mikheil] Saakashvili 15 years ago.”

Others made comparisons closer to home. “Now it turns out that Pashinyan took a page from Serzh Sargsyan’s book - if you cannot solve the problems in the country, then you cannot allow those problems to be discussed calmly,” wrote Hayk Khalatyan, an editor at the news website Dalma and a political analyst, on his Facebook page. Serzh Sargsyan was the autocratic Armenian leader against whom Pashinyan led street protests last year, which resulted in Sargsyan’s resignation and Pashinyan becoming prime minister.

Some suggested the harsh reaction to Adekvad was a tactical mistake. “This is the most disgraceful defeat of the Armenian authorities,” Armen Dulyan, a veteran journalist on Armenian public television, wrote on his Facebook page. “These people [Adekvad] have attained their goal, they got the halo of the persecuted.