Armenia accused Azerbaijan of faking its officer’s death, and an Azerbaijani MP called for Armenia’s leader to be assassinated. 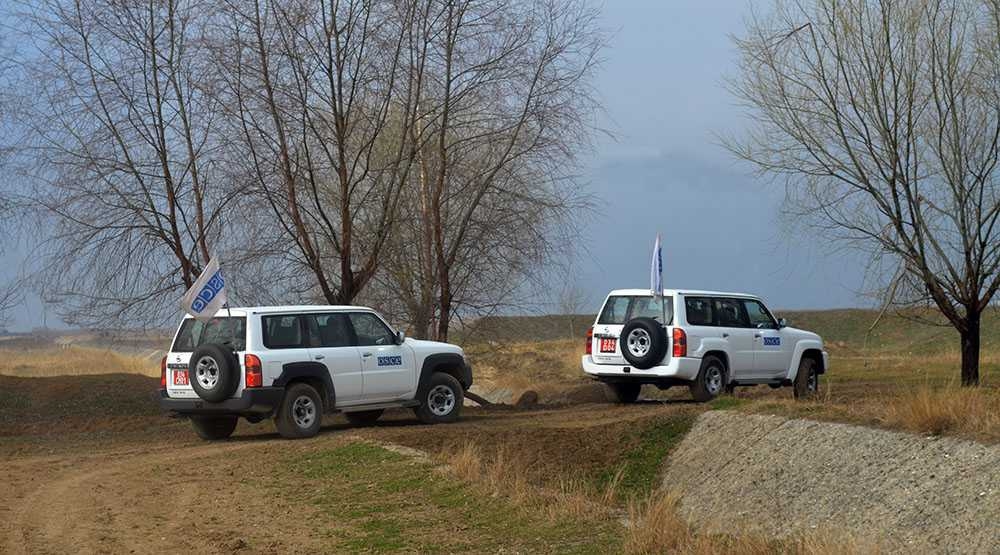 Vehicles from the OSCE monitoring mission on the line of contact between Armenian and Azerbaijani forces. (photo: MoD Azerbaijan)

In recent days one Armenian and one Azerbaijani soldier were killed on the Nagorno-Karabakh line of contact, a rare outburst of deadly violence since the two sides began a new round of negotiations over ending their decades-long conflict.

The Azerbaijan Ministry of Defense announced on May 30 that an officer, Major Agil Omarov, was killed by sniper fire in the Aghdam district. On June 2 members of his family, including two young sons, were awarded medals for valor at a ceremony in his home village of Lelepasha.

A statement from the Azerbaijan Ministry of Foreign Affairs noted that the killing took place during a visit to the region by the co-chairs of the OSCE Minsk Group, the group of diplomats mediating the talks between the two sides, and called it “yet another provocation and serves the purpose of disrupting the negotiations on the settlement of the conflict.”

The armed forces of the Armenia-backed, de facto Nagorno-Karabakh government denied that they had killed Omarov, saying in a statement that the Azerbaijani claim had “nothing to do with the reality.” The statement called on Azerbaijan to “refrain from nonsense steps aimed at artificially escalating the situation with provocative disinformation.”

The Armenian Foreign Ministry also connected the incident to the visit by the OSCE co-chairs but backed the Karabakh authorities’ claims that it was disinformation on Azerbaijan’s part. “This is an attempt to undermine the negotiation process,” said Anna Naghdalyan, the MFA spokesperson. “Thus Baku attempts to shift the blame for its counterproductive stance on the other negotiating parties – Armenia and Artsakh,” Naghdalyan added. (Artsakh is the Armenian word for Nagorno-Karabakh.)

A Western diplomat in Baku who had been briefed on the incident said there was no reason to question the Azerbaijan MoD’s version of events. Omarov’s killing “is not fake news but real, I do not doubt the Azerbaijani account,” the diplomat told Eurasianet on condition of anonymity. A spokesperson for the de facto Ministry of Foreign Affairs of Nagorno-Karabakh declined to elaborate to Eurasianet on the allegations of disinformation.

Omarov’s death came on the day that the OSCE co-chairs met with Azerbaijan President Ilham Aliyev. Earlier the co-chairs – senior diplomats from the United States, France, and Russia – also traveled to Yerevan and Stepanakert. In Azerbaijan, they also met with representatives of internally displaced people from Nagorno-Karabakh, angering some officials in Nagorno-Karabakh.

Two days after Omarov’s shooting, an Armenian conscript, 19-year-old Sipan Melkonyan, was killed by Azerbaijani fire. The de facto government awarded him with a “For Service in Battle” honor.

Before these two deaths, only two soldiers – one on each side – had been killed by enemy fire in 2019. The relative peace along the front lines had come as the leaders of Armenia and Azerbaijan have revitalized talks aimed at resolving the conflict over Nagorno-Karabakh, a territory internationally recognized as part of Azerbaijan but which has been controlled by Armenian forces since the two sides signed a ceasefire in 1994.

But the deaths and the recriminations that followed threaten to set back the tentative progress that had been made in the talks, and by the two sides’ promise to “prepare [their respective] populations for peace.”

On May 31, a member of the Azerbaijani parliament, Aydin Mirzazade, called on his country’s armed forces to assassinate Armenian Prime Minister Nikol Pashinyan. "I ask our snipers, please shoot Pashinyan. Armenia can find a new prime minister. If their minister of defense steps on occupied Azerbaijani lands, please shoot him too. Don't let our officer's blood dry." Mirzazade later claimed his words were “distorted” by journalists. News stories that had reported his original comments were deleted, suggesting a high-level interest in tamping down anti-Armenian rhetoric.

A former de facto minister of foreign affairs for Nagorno-Karabakh, Arman Melikyan, said that the return to negotiations in which the return of Armenian-held territories appears to be on the table has emboldened Azerbaijan, leading to the death of the young conscript. “Baku has already gotten what it wanted at the negotiating table and now its hands are untied,” he said in an interview with the news site 1in.am.

Nevertheless, the negotiation process continues. In the OSCE co-chairs’ statement, they noted that “as requested” they had “provided proposals for concrete next steps in the settlement process, including on humanitarian and security measures.” And the foreign ministers of Armenia and Azerbaijan will meet “soon,” the statement said.