To renovate or destroy? The Culture Ministry is dragging a dispute about Georgia’s heritage into the country’s muddy politics. 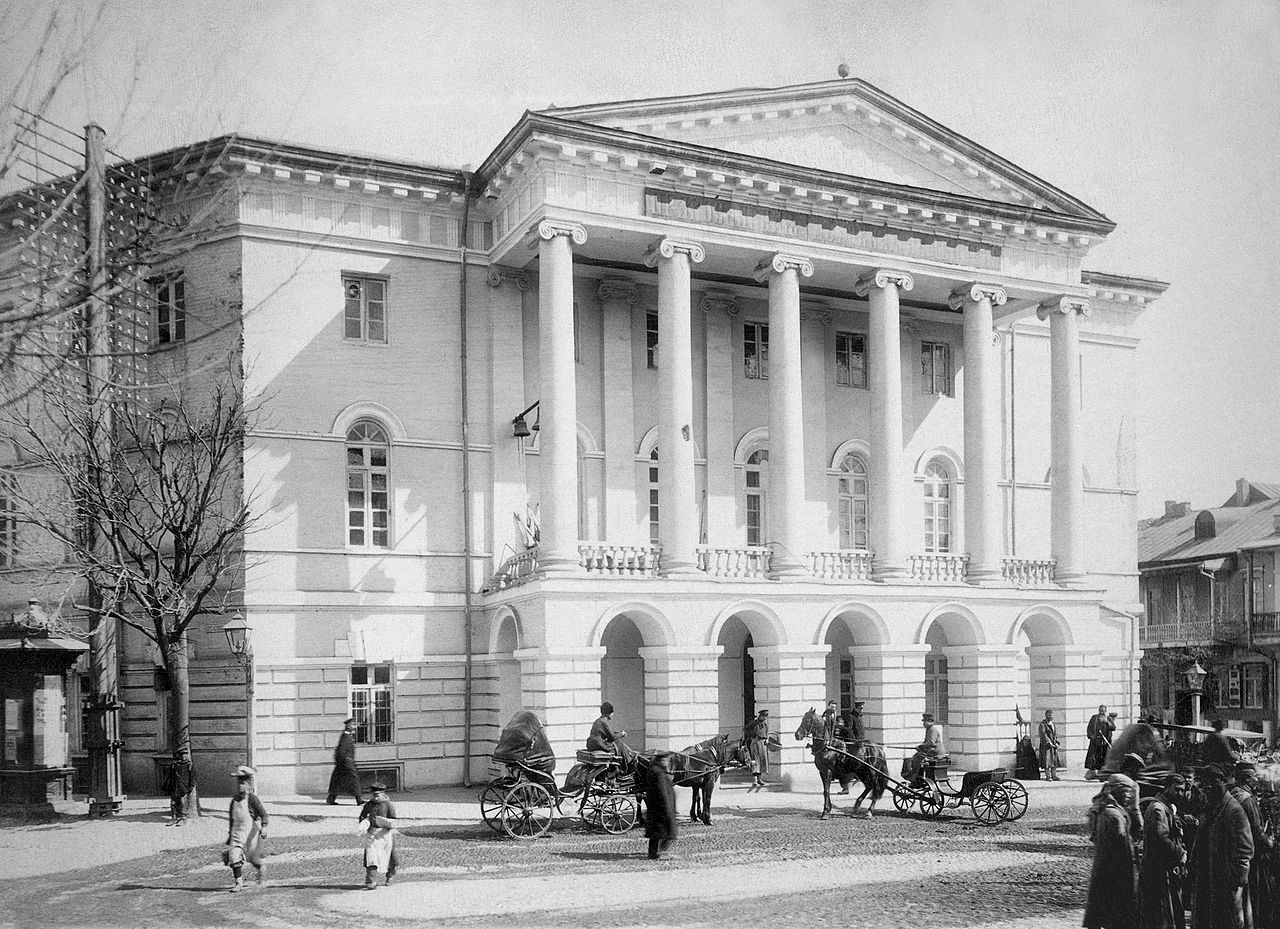 The building in the mid-19th century (Wikimedia commons)

Georgia’s rich cultural heritage is one of the country’s main calling cards and a source of immense pride for ordinary people. Since 1953 the Shalva Amiranashvili Museum of Fine Art in central Tbilisi has been the main repository for the material culture portion of this patrimony: 139,000 objects – from medieval icons to avantgarde paintings – all housed in a landmark building from 1835, one of the oldest secular buildings in the country.

That the building needs repairs is widely accepted. For more than three years, curators have been carefully preparing collections for storage in advance of renovations to the building. But since July 20 the fate of the entire building has been in doubt, engulfed in a war of words between curators and the Ministry of Culture.

That day, the museum’s recently appointed director, Nikoloz Akhalbedashvili, summoned senior staff to an emergency meeting in the grand but decaying neoclassical building. Precisely what was said is the subject of controversy, but, according to several attendees, Akhalbedashvili made it clear that the museum was to be evicted: its collection re-inventoried, packed and moved to an unknown location, and the building given back to the state. According to one attendee, Akhalbedashvili said it would be unprofitable to repair the structure.

Though curators had a meticulous plan for storing items during repairs, the evacuation of the objects was to start immediately and be completed within six months owing to the building’s calamitous state. The implication, at least to several people present at the meeting, was that the Amiranashvili Museum of Fine Art would cease to exist at its current location, and that its prized collection was in danger of being dispersed.

“Nobody knows where the objects should be evacuated,” Nana Burchuladze, chief curator of the museum’s medieval collection, told Eurasianet. “How should the articles be evacuated? Who will do it? The National Museum team already prepared a plan, already prepared a space and they [the new leadership] are just ignoring it!”

Multiple museum experts pointed to the impossibility of a six-month evacuation schedule. Irina Koshoridze, head of the Oriental Arts Department, pointed out that when her collection was moved to a nearby museum it took two years to safely transfer 5,000 objects. “And they want to move 139,000 items in six months? And we don’t know where they are moving? This is a major problem.”

As news of the meeting leaked to the media, the Ministry of Culture stepped in and blamed the previous government, making the dispute unnecessarily political in the eyes of many in the museum community.

In a statement, the ministry said it was intent on “saving the unique exhibits of the museum” and accused the previous government, which left office in 2012, of allowing the museum to deteriorate. But rather than alleviating fears about the fate of the building, the rest of the statement seemed to confirm that the ministry had no intention of saving it. It quoted extensively from a hitherto unknown report by a specialist firm called Caryatid, which stated that owing to seismic activity and subsidence, attempting to save most of the structure would not be commercially viable.

“The museum is being demolished due to the inaction of the perpetrators of the lies,” the ministry’s statement said, referring to the government of Mikheil Saakashvili, and opposition-affiliated media. Blaming nearby road works that were begun under Saakashvili but completed under the current government, the ministry quoted the Caryatid report as finding that renovation was “unlikely to be cost-effective.” Only a small part of the building could be strengthened, the statement concluded.

Georgian architectural historians expressed extreme skepticism at the report commissioned by the Ministry of Culture. “I walked around the building yesterday,” David Khoshtaria of the Chubinashvili National Research Center for Georgian Art History and Heritage Preservation, told Eurasianet on August 4. “There are no significant cracks. There is one vertical crack on the rear façade, which can be easily repaired. There are no significant problems that can’t be fixed. The building must be preserved.”

The building itself, which once housed the seminary in which Joseph Stalin trained to be a priest, is the largest structure in Georgia dating from the early 19th century and is a central piece of Tbilisi’s architectural ensemble. News of its potential demolition generated a public outcry, with museum staff, not known for direct political action, calling a rally on August 4. Plans were mooted to form a human chain around the building to prevent objects being removed.

Then, on August 3, the Ministry of Culture issued a new statement, flatly denying there had ever been a plan to demolish any part of the building and pledging to renovate it in its entirety. It also said that the building would remain in the hands of the museum, directly contradicting what director Akhalbedashvili had told curators.

But with trust between the museum and the ministry at an all-time low, museum staff went ahead with the rally, which attracted around 1,000 people. Responding to the protest, Minister of Culture Tea Tsulukiani hit back, saying the inventory work at the museum would reveal staff wrongdoing. “Several exhibits were taken from the museum and the list of these will be posted at the end of September,” she said in a statement on Facebook.

“She says she is going to punish us at the end of September,” Nino Khundadze, the chief curator of modern and contemporary art, who looks after the collection of Niko Pirosmani, Georgia’s most-celebrated artist, explained. “Because of missing exhibits. She is talking about how we lost, or we sold, or gave away to others, many exhibits. Today I have more than 4,200 [items] in [the modern and contemporary art collection of] the museum, and there are really 29 [items] which are missing. But these were lost in the last half of the 20th century – in 1985, 1982, 1975 – not today and not yesterday.”

The standoff between the ministry and the museum looks set to continue. The minister, Tsulukiani, had few words of reconciliation in her August 6 statement: “Those who want to work should work hard. Those who want to scream can scream.”

William Dunbar is a journalist based in Tbilisi.