Many Azerbaijanis still harbor hopes of returning to their homes, now completely surrounded by Armenian territory. Armenians aren’t so sure. 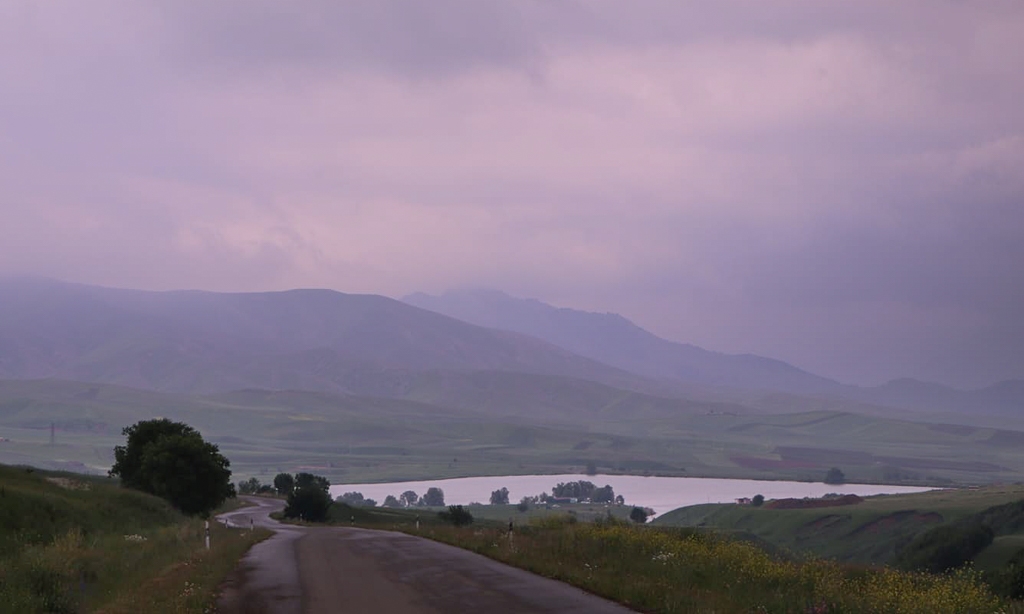 The road to Artsvashen (Heydar Isayev)

Bakhtiyar Hidayat, a poet and teacher, harbors romantic memories of his former home and its abundance.

“You simply didn’t have to work,” he recalls. “A couple of cows in your yard was enough to live on for a year and still provide milk and cheese and yogurt for your relatives in the rest of the country.”

That was in Upper Askipara, a village that came under Armenian control during the first Karabakh war with Azerbaijan in the 1990s. As a result, Hidayat and all the nearly 500 Azerbaijani residents of the village were forced to flee. He and many other residents now live just over the border in the settlement of Narimanov, near the regional capital of Gazakh.

He tried to resume his dairy production at his new home, but he laments that the nature just isn’t the same and his milk isn’t as tasty as it used to be.

“Dairy from Askipara was a brand,” he said. “Milk, butter, cheese, shor [an Azerbaijani curd cheese], you name it – villagers would take it to the market in Gazakh and people would stop them and buy it on the way – and for a good price.”

Azerbaijan’s victory in last year’s war with Armenia has raised hopes among those displaced from Upper Askipara and other nearby areas that they will be able to return to their homes. “As soon as they announce that the villages have been returned, no one will stay here” in Narimanov, he told Eurasianet.

Upper Askipara is one of what is known among Azerbaijanis as the “seven villages,” territories on the northern edge of the Armenia-Azerbaijan border that Armenians took control of in the 1990s. The villages at issue here are distant from and far smaller than the main territory under contention: Karabakh and the surrounding regions. But their status could also be in play as the two sides prepare to negotiate over a formal border and a final resolution to the conflict.

Four of the seven villages – Baghanis Ayrim, Lower Askipara, Kheyrimli, and Gizilhajili – were on the Azerbaijani side of the border between the two former Soviet republics, and were occupied by Armenian forces in the 1990s. Upper Askipara, along with two more villages – Sofulu and Barkhudarli – are oddities of Soviet border-drawing: village-sized exclaves of one former Soviet Socialist Republic inside the borders of another.

Gazakh’s local government has reported that there are 4,136 displaced people from the Armenian-controlled villages of the district. Many of them live in state-provided housing in Narimanov or have moved to Baku or other cities.

Another Azerbaijani exclave, Karki, is further to the south, near Nakhchivan. And there is one Armenian exclave, Artsvashen, inside Azerbaijan; in the 1990s its Armenian residents faced a similar fate to those on the other side of the border.

To swap or return?

In initial reports about the November 10 ceasefire statement that ended last year’s war, the agreement contained language stipulating the “return to the Azerbaijani side the territory held by the Armenian side in the Gazakh region of the Azerbaijani republic.” In the document that was formally published, however, that line had been deleted.

But the following day Recep Tayyip Erdogan, the president of Azerbaijan’s closest ally Turkey, referred to “the return of the Gazakh villages” in a speech to parliament. On November 27, in a meeting with Azerbaijanis displaced from the “seven villages,” the head of the Gazakh local government, Rajab Babashov, said that the villages at issue would be “liberated from occupation” soon, which he said was “indicated in the ceasefire statement.” Babashov’s statement was later removed from the official Gazakh website.

Central government authorities in both Baku and Yerevan have been relatively silent about the fate of the exclaves, but in May, an Armenian opposition source claimed to have documents showing that Armenia intended to hand over the Gazakh villages – which they generally just refer to as “the exclaves” – to Azerbaijan. The areas are especially sensitive to Armenia, as they abut the main road between Yerevan and Tbilisi, Armenia’s primary artery to the north.

Prime Minister Nikol Pashinyan shortly thereafter said Armenia’s preference would be to exchange the exclaves rather than again take control of land within the other country’s borders. “Artsvashen is under the rule of Azerbaijan,” he said at a June 11 campaign event. “Our logic is that the [formerly Armenian] enclave should be exchanged for [formerly Azerbaijani] enclaves.”

But Azerbaijan appears interested rather in regaining control of its exclaves inside Armenia, especially Askipara, Barkhudarli, and Sofulu, said Ahmad Alili, a Baku-based analyst at the Caucasus Policy Analysis Center. “They will provide Azerbaijan with strategic advantages, such as the guarantee of safety of the gas pipeline to Georgia and visual observation over transport lines between Yerevan and Tbilisi,” Alili told Eurasianet. He said the government appears interested in resettling those territories even earlier than it does the land it retook in and around Karabakh.

The wrong kind of IDPs

The Azerbaijani former residents of the “seven villages” face unique challenges in getting housing.

While the government spent lavishly to rehouse hundreds of thousands of internally displaced persons (IDPs) from the war in the 1990s, that effort was suspended following the 2020 war, even as many IDPs continue to wait for new homes.

One is Husniya Ibrahimova, 74, from Barkhudarli. Over the years, she has had to move frequently while she waits for permanent housing to replace her lost home. Ibrahimova said she has repeatedly written to the authorities to ask for new housing, and has been promised a new apartment.

“For decades I changed houses in Baku either because I couldn’t pay the rent or conditions were too bad,” she told Eurasianet. “Now we live in Sumgait and still we can’t manage the bills, with my grandkids’ tuition and my medication.”

Now, though, her wait for a new home is going to get even more complicated. President Ilham Aliyev announced in January that IDPs would not get housing anywhere other than what Aliyev called the “liberated lands” retaken in the war. That decision indefinitely deprives Ibrahimova of the prospect of a new home, as she is an IDP but not from a territory reclaimed in the war.

An official from Azerbaijan’s Committee for Refugee and IDP Affairs told RFE/RL that those displaced from the seven villages will likely be settled in the newly retaken territories instead of in their former hometowns.

From the Armenian side, there is more ambiguity around the prospect of resettlement.

In Karki, which Armenians call Tigranashen, several Armenian families have moved in. One man, who declined to identify himself, told Eurasianet he didn’t believe “rumors” that the village could be given back to Azerbaijan. “This is something the opposition is saying,” he said.

Although former residents of Artsvashen would like to go back, they understand that a trade of the exclaves would be better for Armenia as a whole, the town’s mayor-in-exile, Mamikon Khechoyan, told Eurasianet. “It’s important for our international roads to not go through Azerbaijani villages,” he told Eurasianet. “Especially when the prospect of peace is so far away. People are ready to make that sacrifice.”

“Just like Jews say, ‘next year in Jerusalem,’ now our people say, ‘we’ll meet in Artsvashen,’” he said.

About 3,000 people were displaced from Artsvashen and many of them now live in Chambarak, just over the border in Armenia proper. They have gotten virtually no state support since being displaced but have been promised that, if they can’t return to their former homes as the result of a peace deal, they will be compensated.

“It would be dangerous to live there, of course, but men my age who were born there would go,” Artik Arakelyan, a 52-year-old farmer who lives in Chambarak, told Eurasianet. “I think 10 percent of people would want to go back to Artsvashen. The majority, though, are waiting for the right opportunity to leave Armenia.”

Artsvashen itself is these days largely abandoned except for military facilities, including a lake stocked with fish to supply the soldiers’ and officers’ canteens. But a few Azerbaijani families moved in following the Armenians’ departure and now do small-scale farming, raising chickens and cattle and growing potatoes.

One is Gabil Taghiyev, who moved here 20 years ago from a nearby border village, Goyalli. The land around the village was mined in the war of the 1990s, making it unsafe to farm, Taghiyev told Eurasianet. In Artsvashen – which Azerbaijanis call Bashkand – he can farm safely, he said.

Upper Askipara – which Armenians call Verin Voskepar – is also virtually abandoned. Armenian residents from the neighboring village, Nerkin (Lower) Voskepar, farm the land and on a recent visit by Eurasianet, several groups were picnicking near the small river. An Azerbaijani cemetery remains, which appears to be unharmed, avoiding the fate of many graveyards in territories that have changed hands during the two wars.

But the Armenians of the area do not want their former neighbors to come back. “It’s not possible for the Azerbaijanis to come back to their former homes, we’re categorically against it. We’re enemies,” said Spartak Gevorgyan, a resident of Nerkin Voskepar.

The sensitivity around the exclaves was illustrated by tense experiences the reporters for this story had in the various exclaves, where people were uniformly unenthusiastic about speaking to visitors. In Artsvashen, one resident threatened to report a journalist to the police. In Tigranashen, residents immediately asked a visitor to leave, and in Upper Askipara, Eurasianet was chased out by locals and later questioned at length by the security services.

Meanwhile Bakhtiyar Hidayat, the former Upper Askipara resident, commutes to another city, Aghstafa, to teach history at a school there. Other Upper Askiparans work as day laborers and many of them keep bees on the side, a practice they have maintained from their former village life.

Hidayat has looked up his former home on Google Earth and found it had been destroyed. “It was always a mystery to me as to why they [Armenians] didn’t kill us when we were leaving via Armenian land,” he said. “We were leaving the village for them to use. But then they destroyed it all.”

With additional reporting by Joshua Kucera and Ani Mejlumyan.