Since China began rounding up Uighurs in Xinjiang province two years ago, the diaspora in Istanbul has become more visible. 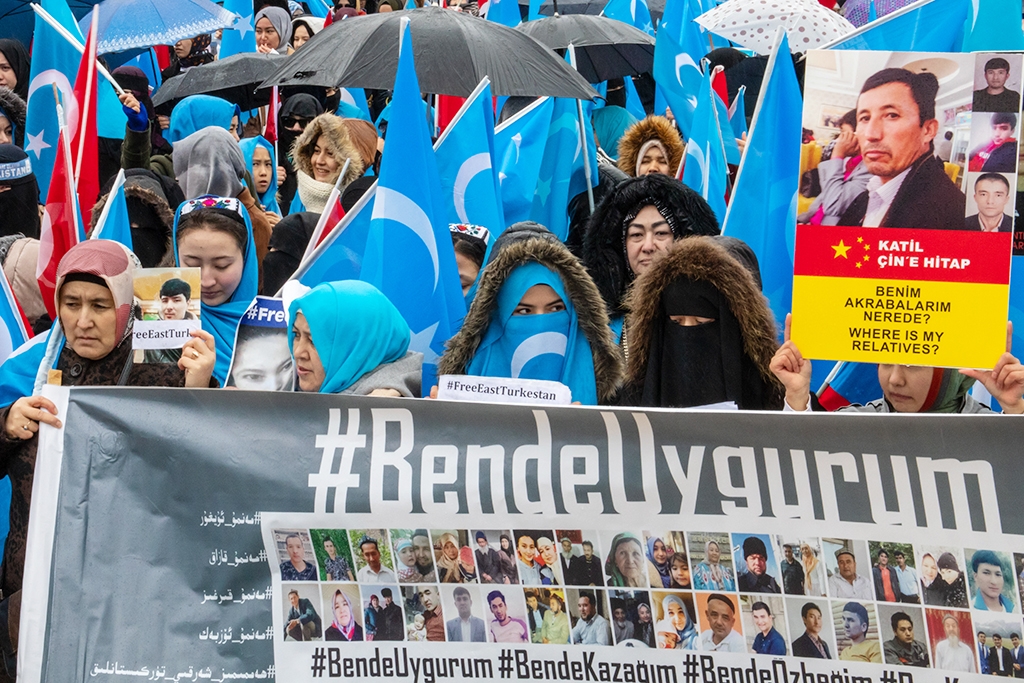 Undeterred by snow and rain, hundreds gathered recently outside Istanbul University’s gilded gates to demand freedom for relatives at the other end of the Silk Road, in China’s Xinjiang province.

Rain-soaked signs listed the names and ages of family members being held in Chinese indoctrination camps. The bright blue flag of the Uighur independence movement swayed above the umbrellas, alongside a smattering of red Turkish flags, as participants chanted: “Long live independent East Turkestan!”

For decades, Istanbul has been home to a large Uighur diaspora. But in the two years since China began rounding up Uighurs and other Muslim minorities in Xinjiang and sending them to camps, the community has become more visible. Uighur bookshops and schools teaching the Uighur language are opening; activists are organizing.

“Uighurs outside of China have become very nationalistic,” said Abdullah, a graduate student in Istanbul who declined to provide his surname because he fears for the safety of family in China. “If you face external pressure, you get more attached to your values, your religion, your cultural heritage, your literature,” he explained. “This nationalism aims to defend Uighur people from Chinese oppression.”

Last August the United Nations condemned reports of “upwards of a million” ethnic Uighurs and other Muslim minorities being “held incommunicado and often for long periods, without being charged or tried, under the pretext of countering terrorism and religious extremism.” Human Rights Watch says the crackdown is “systemic.”

The Chinese government counters that the camps are merely educational facilities – that they provide vocational skills and combat terrorism.

Turkey has been a destination for Uighurs fleeing China for many years, says Rune Steenberg Reyhe, a Columbia University anthropologist focusing on Uighur communities. “I would say Istanbul probably has, outside of Central Asia, the highest number of Uighurs abroad,” Reyhe told Eurasianet. The city has “welcomed Uighurs for a long time, going back to the ‘60s, maybe even the ‘50s.”

The community in Istanbul received a bump around 2014, when China suddenly increased the number of passports it granted Uighurs. “In 2014, 2015 – there seemed to be a loosening up of procedures for Uighurs to get passports and permission to leave China,” said Rian Thum, a fellow at the University of Nottingham who has written a book on Uighur history. That’s changed. “It seems now virtually impossible for Uighurs to get passports to leave.”

Some Uighurs also fled to Turkey after the Egyptian government arrested and deported a group of Uighur students in 2017 – shortly after signing a security agreement with China. Roshengul Abdulhelim, 32, says her husband was detained along with a group of other foreign students that June.

“[The Egyptian police] called me and made me buy a ticket for him,” Abdulhelim said, explaining that her husband left the Dubai airport during a layover and fled to Turkey. She followed him to Istanbul shortly thereafter.

Uighurs in Turkey know that, were they to return to China, they would likely be jailed. “One of the ways authorities decide who goes into those camps is by targeting people who have traveled abroad,” said Thum. “Simply by virtue of being a Uighur abroad, it's virtually impossible for them to return to China without being sent to the internment camps.”

Abdullah’s mother told him that his father had been taken to a camp in September 2017. Since his parents were “obedient citizens” who avoided politics, Abdullah believes his father was taken because he and his brother were in Turkey. The last time he spoke with his mother, in January 2018, she told him not to call anymore.

“The thing that people in the diaspora fear most is that Chinese authorities will harm their family members. This has happened many times; it’s a well-documented phenomenon that they actually arrest people’s family members,” said Thum. “Security forces explicitly threaten it, too – they might contact them with a family member on the phone line.”

After Abdullah moved to Turkey in 2011, he’d talk with his mother on the phone regularly. “I hope she’s okay, but maybe she was taken to prison as well. I have no idea.” He paused for a moment. “I tried to call her multiple times, but I dialed and then I stopped. I don’t want her to be taken to prison because of me.”

Abdullah used to avoid protests, fearing something could happen to his family: “I was so careful, but the results were the same.” Now, because the persecution is so systematic, he said, Uighurs abroad are losing their fear.

Abdulhelil Abitoğlu has expanded the Uighur materials he sells in a bookshop in Istanbul’s Zeytinburnu neighborhood. He helped open the basement shop three years ago; it offers a range of Uighur-language titles, from cookbooks and children’s books to novels and political texts.

“Most of the authors of these books are in prison in East Turkestan [as Uighurs call Xinjiang], but we're keeping their works alive here,” he said. “We're doing that by having a lot of different types of books. They explain the history and civilization of Uighurs.”

In Sefaköy, another working-class Istanbul neighborhood with a sizeable Uighur community, Lokman Hira’i opened a Uighur school in 2015 after seeing many Uighur children on the street during school hours. His school teaches Turkish and practical subjects like math, in addition to Uighur language and history.

After Hira’i’s two older brothers were taken to the camps in early 2017, he started going to rallies, and in December he helped lead a 22-day Uighur protest march from Istanbul to the capital city of Ankara.

“We started with seven people. Then it became nine. Every day, a few more people joined. By the end, we had 70 people.”

And then the Turkish police broke up the march.

Turkey is one of the few countries to publicly condemn China’s repression, issuing a statement last month calling the camps “a great shame for humanity.” But while Turkey has historically been seen as safe for Uighurs, in recent years Uighurs’ legal status has become fuzzier.

Reyhe, the Columbia anthropologist, has found that many Uighur families have problems obtaining legal residency in Turkey. “For a lot of people, it's a really big problem because they can't work. They're running out of money and they basically can’t feed their families because they don't have this residence permit,” he said.

Hira’i says that several of his friends and family members have not received legal residency in Turkey. “My father and my mother applied for residency one-and-a-half years ago. We’re still waiting,” he said.

Laura Neumann is a freelance journalist based in Istanbul.