Fears of civilian exodus rise as Azerbaijan advances in Karabakh

"The looming threat of humanitarian disaster is not only confirmed, but is now only a question of severity.” 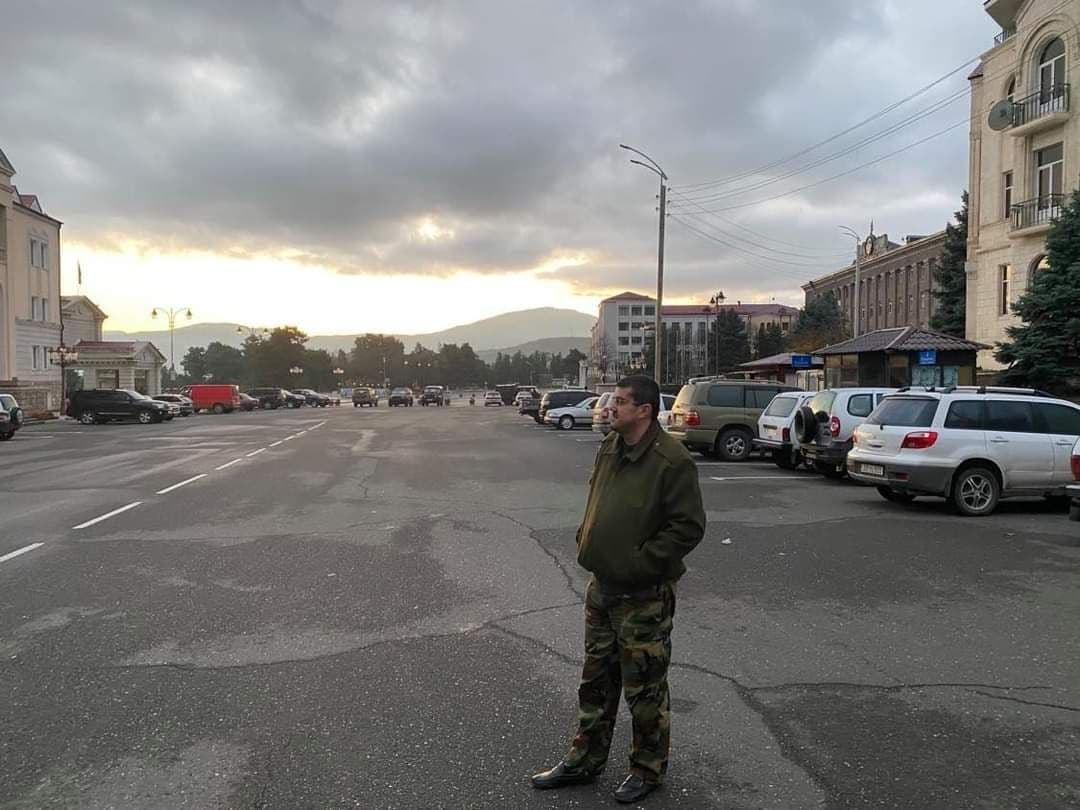 This post has been updated with news of Azerbaijan's announcement that it had captured Shusha.

If Azerbaijan captures Karabakh’s cities, what will happen to the civilians there?

Unknown tens of thousands of civilians remain in Stepanakert, Shusha, and other cities as Azerbaijani forces close in. If Azerbaijan does manage to take the cities, the residents – nearly all ethnic Armenians – will certainly want to leave. But their egress will be complicated by the dangerous status of the two roads leading out of the territory into Armenia.

On the morning of November 8, Azerbaijan President Ilham Aliyev said in an address to the nation that the country's armed forces had captured Shusha, which had been the apparent main goal of the Azerbaijani offensive. Aliyev gave few details, and the claim couldn't be confirmed, but if true it would place Azerbaijani forces in an advantageous position to attack the nearby, downhill Stepanakert.

There have been unconfirmed reports of an evacuation of the area. Analyst Richard Giragosian told Eurasianet on November 8 that the evidence he had seen suggested “a possible general evacuation, with a more sweeping exodus if needed.”

A Polish journalist, Witold Repetowicz, filmed a crowded road leading out of Stepanakert on November 7. "Thousands of cars were driving from Stepanakert to the mountains," he wrote on Twitter. "This is the real face of war."

Armenian officials have denied the reports. “At the moment it is not appropriate to talk about evacuations in Karabakh,” the Armenian Defense Ministry spokesman Artsrun Hovhannisyan said in a press conference the evening of November 7. Hovhannisyan also said, after Aliyev's announcement, that the battle for Shusha was continuing.

The de facto leader of Karabakh, Arayik Harutyunyan, posted a photo of himself standing in central Stepanakert on Facebook the morning of November 8. “Dear compatriots, I met one of the hardest dawns of my life in Stepanakert's Renaissance Square,” he wrote. “We stand with the defenders of our Motherland till the end. The life and death struggle continues.”

A civilian exodus could be a humanitarian disaster, but there is little indication of any preparation for it.

Asked by Eurasianet how Azerbaijan planned to ensure the safety of Armenian civilians should they take the Karabakh cities, a government spokesman pointed to a recent statement by senior presidential adviser Hikmet Hajiyev.

“Civilians wishing to move to the Azerbaijan-controlled territory will be provided with all kinds of assistance and support based on international principles of humanism,” Hajiyev said on November 4. Hajiyev also called on Armenian civilians to “stay away from the zone of hostilities” and claimed that “the greatest danger to the civilian population of the Nagorno-Karabakh region of Azerbaijan comes from Armenia and its criminal junta regime.”

A humanitarian corridor would have to be arranged by the warring sides, Azerbaijani analyst Togrul Juvarli told news website Caucasian Knot. “They should specify the routes and time of opening a humanitarian corridor,” he said, but added that that wouldn’t be possible if heavy fighting was continuing.

The Nagorno Karabakh de facto Ministry of Foreign Affairs did not respond to a question about whether the authorities had an evacuation plan. A spokesperson for the International Committee of the Red Cross in Yerevan said that the organization had not prepared for the situation but would respond if the local authorities asked.

Many Armenians are insisting that there is no need for an evacuation because they will defeat the Azerbaijanis militarily.

“There is a plan,” said Anush Ghavalyan, a former spokesperson for the chair of the Karabakh parliament and now a regular social media commentator from Stepanakert, in a text interview with Eurasianet. “A plan to protect Shushi and clean surroundings from Azerbaijani forces and mercenaries.”

The status of the two roads leading out of Karabakh remains in flux. Early in the conflict, the northern road, which passes from Vardenis in Armenia through Kelbajar, was closed because Azerbaijani forces had taken a height above the road and were able to attack it easily.

That left only the Lachin corridor, a shorter route from Stepanakert and Shusha into Armenia. But fighting has neared that road in recent days and on November 4 Armenia closed it to civilians.

The press freedom organization Reporters Without Borders said on November 5 that 80 journalists were “trapped” in Karabakh because of the danger to the road and called on the United Nations, the Council of Europe, and Azerbaijan to “do everything possible to allow the evacuation of civilians.”

Hajijev responded to the statement by saying that “both roads are under the control of Armenian armed forces. Yesterday it was Armenia that declared closure of Lachin Corridor.”

In recent days, the northern road has again been opened to traffic, but it remains vulnerable to Azerbaijani attack.

“The fear of ethnic cleansing is fairly justified, making the necessity for further withdrawal and evacuation more pressing,” Giragosian said. “However, the vulnerability of the one remaining lifeline to Armenia, the Lachin road, may complicate a path of escape. And it remains unclear if the Azerbaijani side will allow or even encourage such an exodus. Thus, the looming threat of humanitarian disaster is not only confirmed, but is now only a question of severity.”