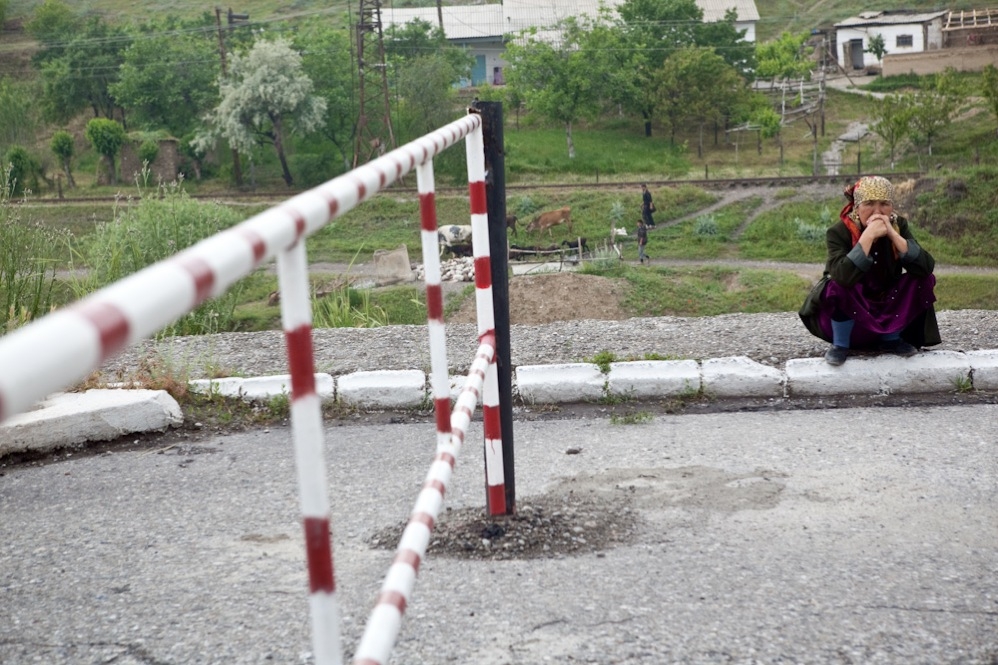 A woman sits at the Kyrgyz border checkpoint at Leilek. The village beyond is in disputed territory. (Photo: David Trilling)

Kuldash is unsure which country he lives in. An ethnic Kyrgyz, he has a Kyrgyz passport, but his son possesses a Tajik one. "My son lives in the next house, in Kyrgyzstan. My house is supposed to be in Tajikistan," he says with a wry grin.

The Ferghana Valley's overlapping borders are notoriously porous, portals for narcotics smugglers and -- regional governments claim -- Islamic insurgents. In many areas, such as around the Tajik town of Charku, the boundary is unmarked and runs through villages that are checkerboards of nationalities, with adjacent houses in different countries. Grazing rights and access to water stoke ethnic tensions, yet locals complain their respective governments are unwilling to arbitrate disputes. There are no checkpoints: setting up a barrier would be an implied acknowledgment of delimitation.

The potential for conflict appears high. Indeed, EurasiaNet recently witnessed one heated fight between Tajik and Kyrgyz men over the perceived slight of a toddler. Both blame the other side, maintaining they have lived in the area longer. The claims are eerily reminiscent of similar intractable disputes in the Caucasus, a comparison the villagers themselves are quick to bring up.

"They feel they are the majority and have all the rights. If things continue the way they are, it is possible there could be open conflict or a war ... in five months, or five years. It could be like [Nagorno]-Karabakh," says Aberosat, a Kyrgyz schoolteacher in the village of Koktash, which the Tajiks call Somonion.

Claims and counterclaims generally start with after-school fights and wildly different population figures. For starters, many locals describe their community as oppressed by a much larger population of others, whether Tajik or Kyrgyz.

Aberosat faults the Tajiks for the frequent arguments. "In our national mentality, we feel we must maintain good relations with our neighbors and not have conflicts with them. But in Tajik culture, it is completely the opposite," Aberosat said.

In identical terms, a schoolteacher at a Tajik school a few hundred meters away blamed the Kyrgyz with stirring up tension. "If we adults see two groups of children fighting, we separate them and tell them they shouldn't fight," says Israel. "But on the Kyrgyz side, it is the opposite. If they see Kyrgyz children beating up Tajik children, they encourage them." He blames the Kyrgyz for seeking dominance. "There is some sort of struggle for power and the Kyrgyz want their villages to be only Kyrgyz. We've lived here together for centuries and we should continue to do so in a friendly way."

Kusan, a self-described Kyrgyz patriot and native of Koktash, blames the Tajiks for frequent fights between children. "They're dishonest," he claims. As his group of male friends sits menacingly across from a Tajik house, a woman comes out and quickly runs back inside. They laugh and point. Kusan says he is on the frontline defending the Kyrgyz nation. "Other Kyrgyz don't live on the border and therefore don't understand patriotism. We live here to protect the border. Every week we have a conflict."

From his muddy rice plot alongside a spring-swollen river, Nematullah gestures up and down the valley attempting to define the border. He is not worried for his particular plot, as the land has been in his Tajik family for generations. But the cultural divide is sometimes too obvious to him. "Tajiks are offended that the Kyrgyz are drunk all the time. When they're sober, they're very good people, but if they drink a little bit," he stops, shaking his head.

Nematullah insists he has good relations with his Kyrgyz neighbors, but complains that Kyrgyz authorities have an unfair double standard. "Kyrgyz cars can come into Tajikistan and go to [the regional capital] Istaravshan and no one will touch them even though they have Kyrgyz license plates. But we can't go to [the Kyrgyz regional capital of] Batken in our cars with Tajik license plates," he says. "We can't go there peacefully. The police stop, detain us and threaten us."

The border is a touchy issue, acknowledges Toktokuchuk Mamytov, chairman of Kyrgyzstan's Border Service. "There are always problems in everyday life: neighbors can't share water, or somebody's cattle got into a neighbor's garden, and so on. It is the same everywhere around the world." But there is no possibility of serious conflict, he stresses.

In the past four years, the Tajik-Kyrgyz border delimitation commission has "had very productive results and we have achieved a lot. There are 971 kilometers of border between Tajikistan and Kyrgyzstan and we have cleared about 50 percent of them," Mamytov said. "At the moment we have three or four arguable areas, which are still undecided, [but] the issues that exist are not a threat to Tajik-Kyrgyz relations."

Yet Zeinura Isabekova, project manager at The Foundation for Tolerance International, an NGO in Kyrgyzstan's regional capital of Batken, says conflict could break out while Bishkek and Dushanbe dally. "It is complicated because governments still keep a very strong position on their version of which land belongs to whom," she says. "Conflicts might take place, not only because of the demarcation, but also due to other social problems as well. They have big problems with water, land, migration and other factors which add up to demarcation problems."

The potential for conflict appears to have grown lately with the new construction of a road and bridge through contested land. In March, Bishkek announced it would rent a contested piece of territory from Tajikistan to build a road across Batken Region. Kyrgyz villagers are furious, recognizing the agreement as a tacit acknowledgment the disputed land belongs to Tajikistan.

For now, some prosper off the uncertainty, creating unofficial free trade zones in the ungoverned "neutral" areas. On a recent visit, Tajik and Kyrgyz businessmen were in the process of selling a teal Lada sedan near Charku. Nurek, a Kyrgyz car trader who delivers a vehicle every week from Osh, is clearly happy to do business with Bohir, a Tajik. Though neither is certain to which country the spot really belongs, they laugh at their merchandise: a car without number plates. "We have an agreement," they say with a smile.

David Trilling is the Central Asia Coordinator for EurasiaNet.