Fighting between Armenia and Azerbaijan widens

The international response to the clashes – the worst since 2016 – has tended to treat both sides equally, while each side insists that the other is to blame. 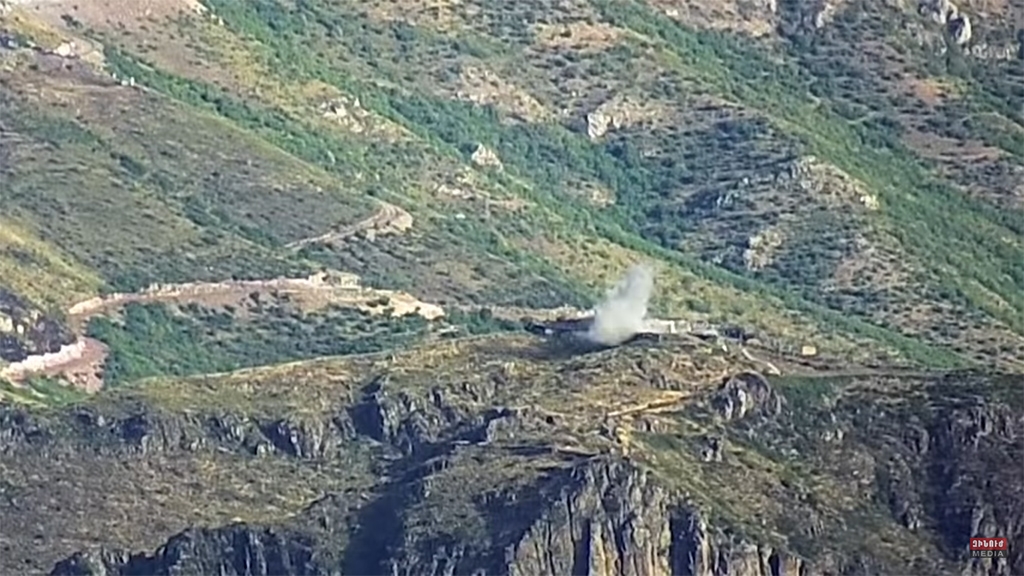 Screenshot of an Armenian armed forces video showing a strike on an Azerbaijani position.

Fierce fighting between Armenia and Azerbaijan continued for a third day, with a reported 11 soldiers on both sides killed. Both sides also reported the other attacking civilian settlements in what appears to be a widening conflict.

Across the border in Armenia, Azerbaijani drone fire hit “civilian infrastructure” in the village of Berd on July 14, the Armenian side reported. The day before, the villages of Chinari and Aygepar were targeted, Yerevan said.

The fighting, which broke out on July 12, is now the deadliest since the “April War” of 2016, when more than 200 on both sides were killed. But that conflict took place on the line of conflict between the Armenian-controlled de facto republic of Nagorno-Karabakh and Azerbaijan proper, where clashes have been more common. The more recent battles have been on the international border between Armenia and Azerbaijan, where there have been occasional exchanges of fire in recent years, but not fighting this serious since the 1990s.

Calls to stop the fighting have poured in from the United States, European Union, and the OSCE Minsk Group, the U.S., France-, and Russia-led diplomatic body brokering peace talks between the two sides. All issued similar appeals to “both sides” to stop the fighting, which rankled those on (yes) both sides, each of which blames the other for starting the fighting.

Three days in, it still remains unclear which side fired first. The border remains largely unmonitored, with no independent sources of information or verification. When the ceasefire is violated, suspicion typically falls on Azerbaijan, as Armenia has little to gain from disturbing the status quo: its forces control the territory at the heart of the conflict, Nagorno-Karabakh, as well as several surrounding districts of internationally recognized Azerbaijani territory.

But given that this fighting started on the border with Armenia, not the line of contact with Karabakh, that logic is less applicable: Azerbaijan has less to gain by fighting in Armenia proper.

Emil Sanamyan, an analyst at the USC Institute of Armenian Studies, suggested that the trigger may have been a new outpost constructed by the Armenian armed forces, which would have given Armenia a tactical advantage in the area and which Azerbaijani forces tried to destroy.

Laurence Broers, a longtime scholar of the conflict, suggested by contrast that Azerbaijan might have had geopolitical motivations to probe the international border, to test the treaty arrangement that Armenia has with Russia.

Indeed, perhaps the most consequential “both sides” statement came from the Russia-led Collective Security Treaty Organization (CSTO), of which Armenia also is a member. Quickly after the fighting broke out, Armenian officials began to publicly call for the CSTO to get involved. “The issue is that this is effectively an attack on a CSTO member state,” Armenia’s ambassador to Moscow, Vardan Toganyan, told Russian radio Govorit Moskva on July 13.

But the CSTO’s response, from Yerevan’s point of view, was lacking. It first called, and then abruptly canceled, an emergency session of the organization’s security council, putting it off until an undetermined date. The CSTO then issued a statement on July 14 that took an even-handed approach: “The situation that has developed does not contribute to the normalization of the situation on the border of the two neighboring states, one of which – Armenia – is a member state of the CSTO, and is evidence of the violation of the ceasefire agreed by the leaderships of Armenia and Azerbaijan.”

What action the CSTO might actually take in a serious conflict between Armenia and Azerbaijan has always been up for speculation; the organization failed to intervene when another member state, Kyrgyzstan, experienced serious violence in 2010 and has since suffered from a credibility problem.

Those speculations have been heightened since 2018, when Armenia’s “Velvet Revolution” brought in a new government including many pro-Western and anti-Russia officials. Moscow’s concerns were exacerbated when the new authorities’ anti-corruption campaign took aim at Yuri Khachaturov, a former senior Armenian military officer who then became the CSTO’s secretary general. All that has raised questions about the extent to which Russia (which pulls the strings in the CSTO) will be interested in sticking its neck out should Armenia need meaningful support.

“Armenia is a member of the CSTO. Azerbaijan is NOT a CSTO member. That’s exactly why the CSTO should condemn Azerbaijan’s provocation and call only the Azerbaijani side to a ceasefire, without any pointless statements aimed at both sides,” wrote Edmon Marukyan, the head of the opposition Bright Armenia party, on Twitter.

Whether or not all this was Azerbaijan’s intention, there has indeed been gloating from Baku about Yerevan’s failure to get much support from Moscow. But this must not come as a huge surprise to Armenians, either, few of whom have many illusions about the depth of Russia’s support for them. And pro-Western Armenians, too, may be taking some satisfaction in the vivid illustration that Moscow is an unreliable ally.