Migrants and diasporas from the two sides have brawled around the world in a social media-fueled interethnic clash larger than this conflict has previously seen. 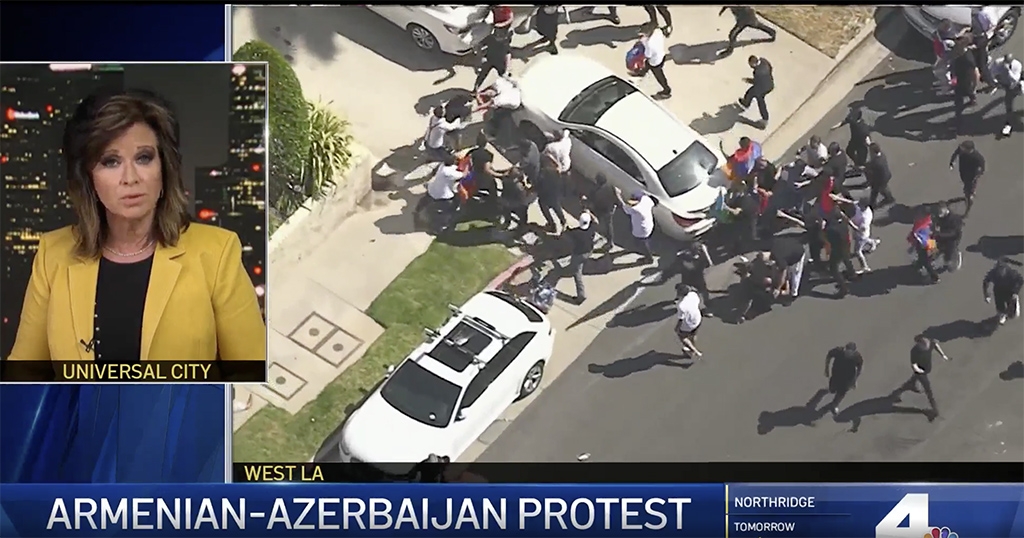 Armenians and Azerbaijanis clash outside the consulate of Azerbaijan in Los Angeles on July 21. (Screenshot from NBC News)

Even as the shooting in the Caucasus has calmed, an unprecedented series of brawls and attacks around the world between Armenians and Azerbaijanis continues to fan the flames of conflict.

Over the past week, Armenian and Azerbaijani migrants and diaspora members have clashed in cities including London, Brussels, Moscow, and Los Angeles. Many of the fights have occurred outside embassies at demonstrations supporting one side or another in the outbreak of fighting along the Armenian-Azerbaijani border that began two weeks ago. Other confrontations have been provoked by groups who target businesses or institutions associated with the other ethnicity.

The scope and scale of the fights are unprecedented and have become the top story both in the Armenian and Azerbaijani press. The narrative has mirrored that of the border clashes themselves, with the diaspora brawls becoming the subject of accusations and counteraccusations about who started them.

Armenia’s Foreign Ministry blamed the government in Baku for instigating the clashes. “The expanding geography of these actions and the facts of the involvement of Azerbaijani officials in the actions against the diplomatic missions of Armenia prove that the above-mentioned actions are coordinated by the Azerbaijani official structures,” the MFA said in a July 24 statement. Deputy Foreign Minister Sharvash Kocharyan went further, tweeting that the clashes proved that the nature of the conflict was “civilizational” vs. “anti-civilizational.”

Azerbaijan’s MFA, meanwhile, blamed “radical Armenian groups.” First Vice President Mehriban Aliyeva called on international human rights groups to “give a fair assessment” of the events. “The decades of hatred and the ideology of phobia of Azerbaijan are bearing fruit – some Armenians throw stones at peaceful Azerbaijani protesters in the center of world capitals, while others fire heavy artillery at the homes of Azerbaijani citizens,” Aliyeva said in a statement.

The diaspora clashes were sparked by an outbreak of violence on the border on July 12. While the heavy fighting lasted only a few days, tensions and emotions have continued to run high both in the countries themselves and among Armenians and Azerbaijanis living elsewhere.

The first major episode between the two populations took place in Moscow, after a supermarket chain run by businessmen from Azerbaijan (though from the country’s Mountain Jewish population) on July 18 abruptly stopped buying apricots from Armenian dealers. That confrontation ended peacefully, with Armenians banding together to preserve the fruit before it spoiled.

But physical clashes already had begun across Moscow and other parts of Russia. Russian media and social media users have been reporting a wide variety of melees, including gangs of men armed with clubs attacking Armenian and Azerbaijani restaurants.

On the other side of the planet, July 21 also saw a massive brawl in Los Angeles, after a group of Armenian-Americans held a large demonstration at the Azerbaijani consulate there. There were a small number of Azerbaijani counterprotesters who were attacked; three Azerbaijanis reported assaults to the police, which were being investigate as hate crimes, Los Angeles media reported.

Over the next two days there were several incidents in Belgium, including a group of Armenian men beating a single Azerbaijani young man, a video of which particularly sparked rage in Azerbaijan.

But the violence has been most widespread in Russia, home to some of the largest migrant and diaspora populations from both. Armenians have been angered by a series of videos showing individual Armenians being attacked by Azerbaijanis, or men targeting drivers of cars with license plates from Armenia. In one mass brawl on July 24, 25 people were arrested, the Russian authorities reported, with several other smaller fights taking place across Moscow over the weekend.

Following the Los Angeles attack, the U.S. ambassador to Baku, Earle Litzenberger, was summoned to the Azerbaijani MFA. A statement by the MFA quoted Litzenberger as saying that there was “indisputable evidence that it was carried out directly by aggressive Armenian demonstrators and that it was impossible to justify the attack by a large number of Armenians against Azerbaijanis gathered there for a peaceful protest.”

When Eurasianet asked the embassy whether Litzenberger had in fact made that statement, a spokesperson referred to identical formal statements issued by U.S. embassies in both Yerevan and Baku did on July 25 not blaming any one side, but “condemn[ing] acts of violence as inconsistent with the universal principles of peaceful assembly and protest.”

Many commentators noted that this scope of interethnic violence wasn’t even seen in 2016, when fighting between the two sides was much deadlier, with over 200 killed in four days of fighting. In this most recent round, a total of 17 have been killed on both sides, including an Armenian soldier reported shot by an Azerbaijani sniper on July 27.

Emil Sanamyan, a Washington, D.C.-based analyst for the USC Institute for Armenian Studies, said on Twitter that the clashes were “inevitable” given the growth in diasporas on both sides and that “modern technology keeps them more connected to [their] home countries.”

As the violence metastasized, a group of Armenians and Azerbaijanis organized a joint statement condemning the growing violence and created a hashtag for the campaign, #WordsNotSwords.

“While our societies have fundamental disagreements regarding the Armenian-Azerbaijani conflict, fistfights in streets across the world do nothing to advance the cause of either side,” the statement read. “Instead, they are an affront to basic safety and human dignity.” Cavid Aga, an Azerbaijani student living in Turkey who helped spearhead the initiative, told Eurasianet that it had gathered 153 signatories and would be formally published soon.

In Armenia and Azerbaijan, news coverage and social media discussion of the events heavily tilted toward their respective side’s victimization. Anna Hakobyan, a newspaper editor and the wife of Prime Minister Nikol Pashinyan who has created a “Women for Peace” campaign, wrote that the Azerbaijani side was to blame for the clashes around the world. “Those actions found their response; of course, our compatriots had to defend themselves,” she wrote in a Facebook post.

Other Armenians, though, expressed dismay at their side’s involvement in the clashes. “Armenians around the world, please do not endanger the life and health of our compatriots living outside Armenia,” wrote Armen Gharibyan, the head of the NGO Human Rights Power. “Stop beating Azerbaijanis in the streets and filming and posting it. You are not solving any problem for Armenia and Armenians like this, you are only increasing the enmity.”

In Azerbaijan, some called for retaliation against attacks by Armenians, including Kamil Zeynalli, a prominent athlete, who in a Facebook post mentioned Los Angeles and Brussels, the two incidents where Azerbaijanis most clearly were the victims of a larger, Armenian crowd: “I beg you – our brothers, Azerbaijani sportsmen, avenge their beating.”

Others, though, called for restraint so that Azerbaijan could maintain the moral high ground. “Do you know what it is like to be perceived to be wrong when you are right?” wrote independent journalist Khadija Ismayilova on her Facebook page. “We were all shocked by Armenians’ fascist behavior in Los Angeles and Brussels. If we repeat what they did, we will witness once again how it feels like to be perceived wrong while you are right. We are not savages. What was done to us was savagery.”

With reporting by Joshua Kucera, Ani Mejlumyan, and an Azerbaijani journalist.