Some of the purported cures spreading on social media are dangerous. 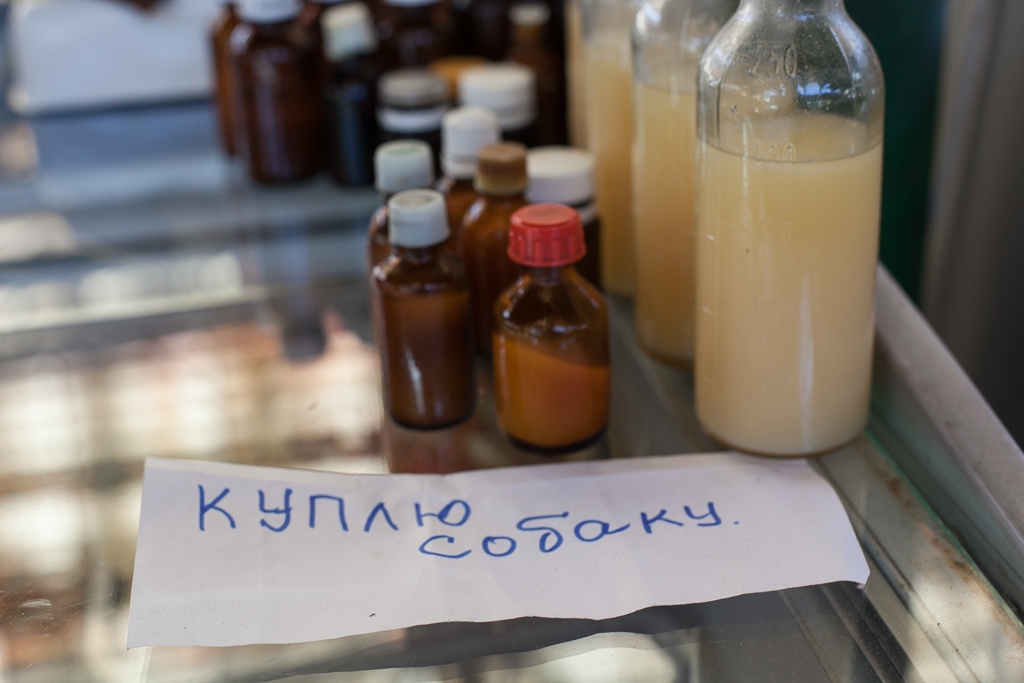 Bottles of dog fat in a Bishkek market accompanied by a request for live dogs (photos: Eurasianet)

When the drugs run short and doctors are hard to find, it is time to fall back on folk remedies.

Whether or not they work is another matter.

With state-provided healthcare in Kyrgyzstan struggling to cope with the COVID-19 outbreak, many are turning to traditional cures, shared via messaging apps and often of dubious and ethically questionable value. One that will disturb many an animal-lover is the suggestion to tuck into soup made with dog meat.

It isn’t all quite so grim.

In March, messages spread like wildfire across WhatsApp groups extolling the virtues of ginger- and lemon-based concoctions as a defense against coronavirus infections. The chatter became so great and insistent that retail prices for these items surged.

The coronavirus crisis has attenuated somewhat in recent days, but the figures are still far from reassuring for a healthcare system as poorly equipped as that of Kyrgyzstan. As of August 13, there have been more than 41,000 confirmed coronavirus cases. Of that total, 33,300 are said to have recovered.

Among the more troublingly quackish recommendations in circulation, also usually via WhatsApp, are ones to inhale the fumes of pure alcohol or hydrogen peroxide. The contention of the proponents of such methods is that the fumes keep the lungs healthy by killing viruses and microbes. Doctors dismiss such flimflam as a surefire way of incurring serious and potentially fatal lung injuries.

Dabbling with alcohol as a cure for coronavirus has already had deeply tragic outcomes. In March, dozens of nationals of Turkmenistan living in Turkey died after consuming low-quality bootleg alcohol in the belief that it would keep them safe from COVID-19.

And yet, in Kyrgyzstan, it is sometimes qualified medical personnel issuing tips steeped in debatable science. In early July, for example, Asamidin Maripov, the director of the Nookat territorial hospital, in the south of the country, talked to one news outlet about the health-giving properties of dog and badger fat.

“The fat of badgers, pigs or dogs has been considered to have medicinal qualities since ancient times, but you also have to consider what state of health a patient is in. There are some who can really benefit, but it is another matter for people with high blood pressure or gastrointestinal problems,” Maripov told Sputnik news website, being sure to get the caveats in.

No sooner had the doctor’s comments been published that there was a flurry of demand for dog meat dishes. Classified advertisement websites began to fill up with notices asking to buy dogs or offering to sell dog or badger fat.

The theory goes, according to the folk medicine-based exhortations to consume dog meat, that the soup made from the animal is rich in protein and is, therefore, somehow beneficial for the lungs.

This is nothing new. In parts of Central Asia, dog fat is a well-established would-be treatment for tuberculosis, which is especially rife in the region’s prisons. It is easy to track down bazaar stands trading in little bottles of a viscous white substance variously labelled as dog or badger fat.

One Korean restaurant in Bishkek discreetly offers dog soup, at 200 som ($2.60) a bowl, as part of its evening menu as a way of “working up a good sweat in bed.” 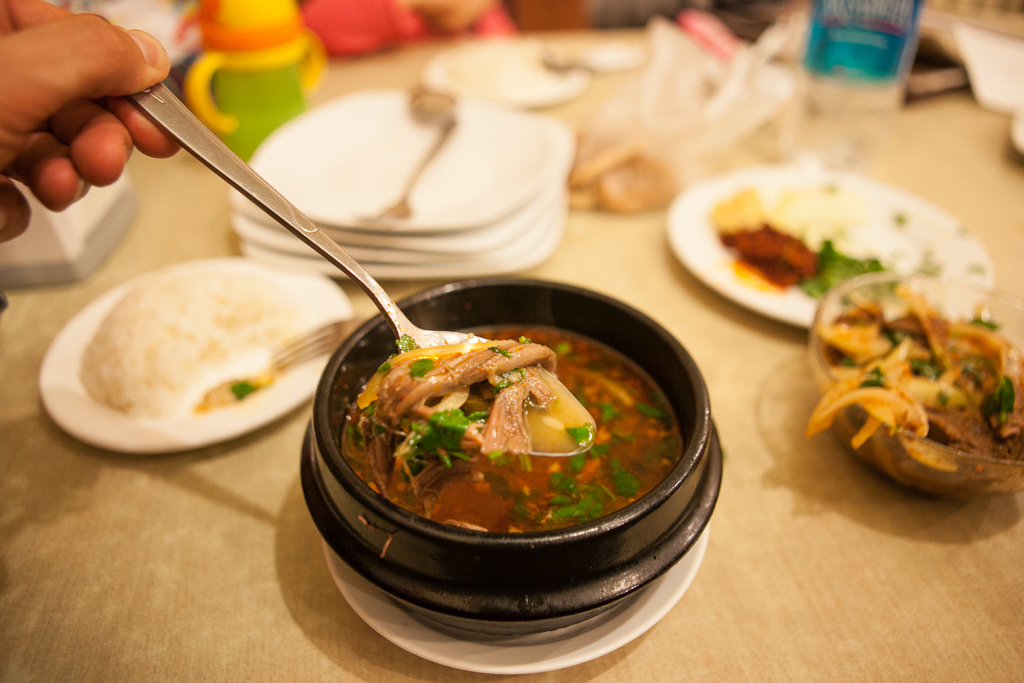 Animal welfare activists are appalled at how some have sought, by less-than-honest means, to try and take in shelter animals for ulterior purposes.

“We collect our tailed friends through notices on [a classified ads website] and in the last few days we have been getting calls from all kinds of numbers asking us if we have dogs, and are our dogs tubby,” a representative for the Kainar animal rights group wrote in an Instagram message. “And when you ask them straight out if they want the dog for meat, some are not ashamed to say that they are. And then they start cussing, saying that we are obliged to give them dogs for meat so as to save the population from pneumonia.”

Now the group has ceased using classified ads altogether, preferring only Instagram as a method for getting the word out. Fewer animals are being placed since checks on prospective pet owners are now necessarily more stringent.

Another folk technique that has made a resurgence in the time of COVID-19 is a form of bloodletting known as hijama, or wet cupping. The patient has suction cups placed along certain areas of the body, and incisions are then made to those vacuum-inflamed patches of flesh, purportedly enabling some form of detoxification. Skepticism abounds about the usefulness of such treatments, but doubt becomes concern when its practitioners do their work in unsanitary conditions without official oversight.

Kural Chokoyev, a popular pop singer, was among the first to spread the word about the alleged virtues of hijama. Chokoyev made a self-filmed video with journalist Tynchtyk Altymyshev and activist Almaz Raimbekov in which the trio spoke at length about cupping’s miracle effects. The video has racked up more than 140,000 views.

“We have wonderful news for you,” Chokoyev says in the video. “Our friend Almaz has found a way to treat COVID-19. It turns out that this is a tradition handed down by our prophet.”

Raimbekov goes further and says that he used bloodletting to treat 20 people with COVID-19 and bilateral pneumonia and that all of them recovered.

“If a person does hijama three times within 10 days, that person will be safely cured,” he says.

But the Health Ministry has warned the public to refrain from resorting to unproven treatments, especially ones that leave patients liable to blood poisoning or contracting diseases even more dangerous than pneumonia, like HIV or hepatitis.

In any case, the 10-day period cited by Raimbekov raises suspicions with those who have medical training.

“People say that they underwent the treatment for seven-eight days and that their temperature went down. But in that timeframe, a person’s organism can fight the virus and develop immunity and the temperature goes down of its own accord,” Ainura Akmatova, head of the public health department at the Health Ministry, said in July.