The clash arose from rival claims to land. 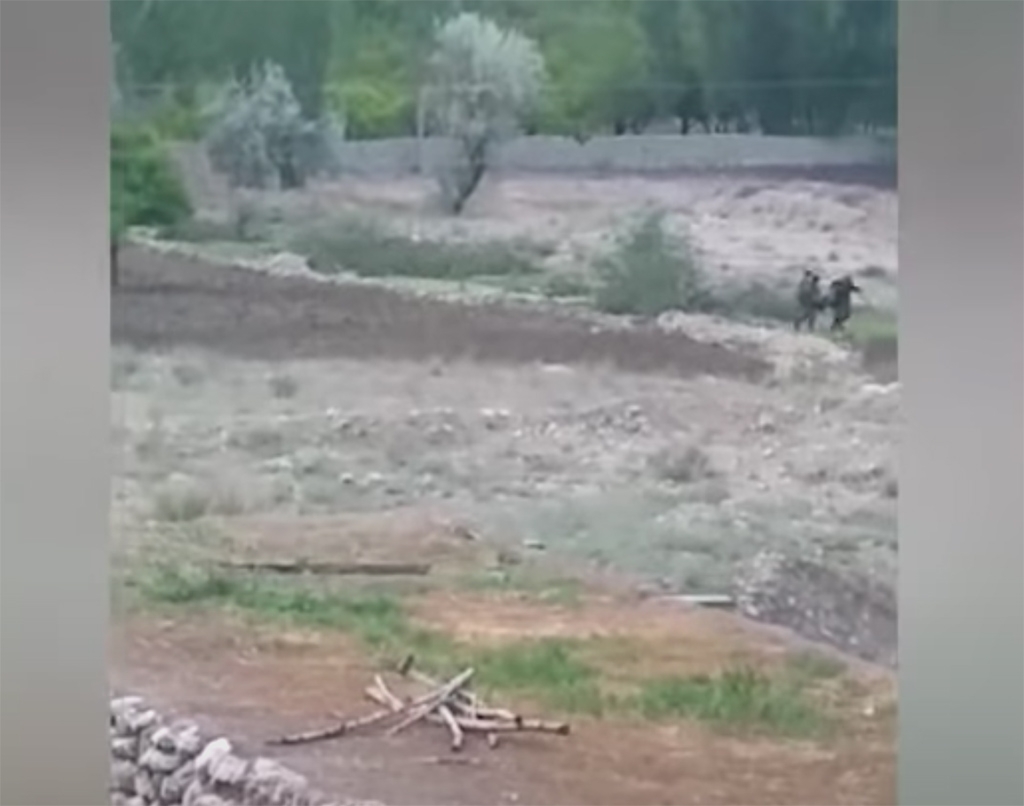 Amateur footage appearing to show a wounded person being carried from the scene of the clash.

Another round of clashes among residents of villages along the border of Kyrgyzstan and Tajikistan has once again precipitated an exchange of gunfire between the countries’ armed forces.

The Kyrgyz border service said fighting broke out among local residents on May 8 in the area of the Chek district, in Kyrgyzstan’s Batken region, over the use farming land.

The border in the area is unmarked, but the fields in question are said to have been mainly used by Kyrgyz nationals. But Tajik state agency Khovar cited their country’s border service as saying that Kyrgyz people were trying to seize 40,000 square meters (10 acres) of land belonging to Tajikistan.

An argument escalated into mutual stone-pelting with dozens of people involved in the clash on either side. Somebody reportedly fired a hunting weapon.

The Kyrgyz authorities are now, however, accusing the Tajiks of adopting excessive force in trying to quell the unrest.

"In order to prevent the escalation of conflict, the border guards of Kyrgyzstan and Tajikistan fired several warning shots into the air, and for some time the situation was brought under control," the Kyrgyz border service said.

But some time later, the Tajik border service, which like its Kyrgyz opposite party operates under the auspices of the security services, deployed mortar fire, sending shells flying in the direction of Kyrgyz citizens and border personnel, the Kyrgyz said. Three Kyrgyz servicemen are being treated for their injuries in the hospital, officials said.

As is common in such situations, the Tajik side has a slightly differing account. Their border service says that Kyrgyz troops fired directly at unarmed Tajiks, wounding two of them in the process.

According to the Tajik border service, the Kyrgyz soldiers neglected to try taking control of the situation and instead began to shoot at unarmed civilians. As a result, two Tajiks were seriously injured, they said.

Sputnik news website cited a spokesman for the Isfara district, Ikbol Teshayev, as saying that one of the injured people was in need of an urgent operation. Teshayev said the Tajik troops only acted on provocation from Kyrgyz villagers and troops.

“In response, the Tajik side also engaged,” he said.

As of the late evening on May 8, tensions appeared to have abated and officials on either side were said to be in talks.

Such conflicts and subsequent escalations have become a recurrent part of life on certain sections of the Tajik-Kyrgyz border. Similar scenes in the Kyrgyz village of Kok-Tash in January led to 250 local people needing to be evacuated for safety.

And yet, there had been some hope of improvement in July 2019, when the leaders of Kyrgyzstan and Tajikistan, Sooronbai Jeenbekov and Emomali Rahmon, respectively, met on the site of a contested border area in a gesture that appeared to presage a new push to finally putting an end to decades of simmering trouble.

Fighting only days before had claimed at least one life, left dozens injured and forced the evacuation of hundreds of people.

Subsequent talks on border demarcation have not had the desired outcome, although some technical fixes have been put in place. In April, both governments in a joint effort installed video surveillance cameras in some areas of the contested regions so as to be able to carry out clearer evaluation of cross-border conflicts.