The issue became a hot topic on social media, reigniting fears that the government may not have the UNESCO-listed site’s best interests at heart. 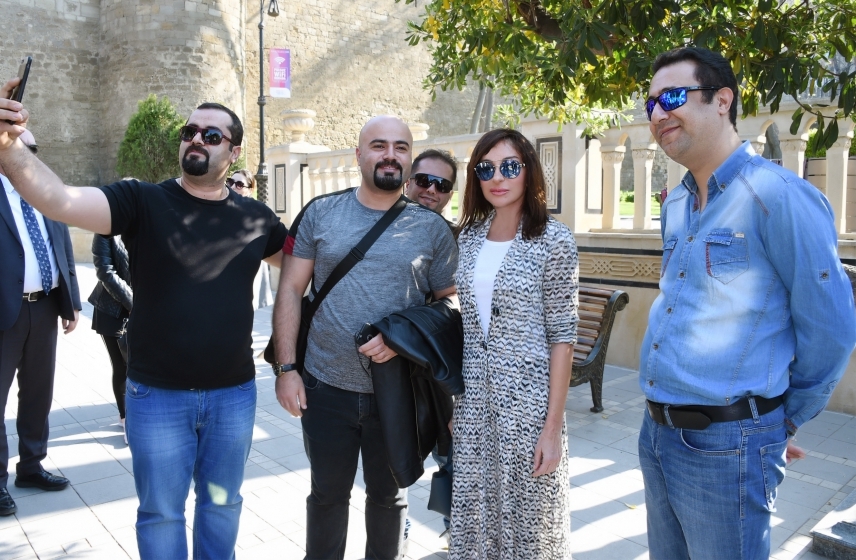 Azerbaijan First Lady Mehriban Aliyeva poses with fellow citizens as she tours Baku's old city in an effort to tamp down concern about construction in the historic site. (photo: mehriban-aliyeva.az)

A video showing construction in Baku’s historic old walled city spread across social media in Azerbaijan, reigniting persistent fears that for the government, preserving the UNESCO-listed site may come second to commercial interests.

Aslan Ismayilov, a lawyer in Baku, published a video to YouTube which seemed to show the expansion of a restaurant in the old city (known locally as “Icheri Sheher”), which he described as “quiet vandalism.” The video, published on April 20, quickly spread on the Azerbaijani internet and sparked outrage. The story took on some elements of misinformation, as photos of damage done years ago began to circulate along with the original, apparently legitimate, video.

First Vice President Mehriban Aliyeva took the unusual step of personally visiting the site on April 26 and met with business owners and, as described by a Space TV report, assured Azerbaijanis that “not a single stone of the walls will be damaged.”

Bakuvians’ concerns are justified, as the government has a long record of pursuing glitzy development in Baku while cutting corners on historic preservation. The old city became a UNESCO site in 2000 and, thanks to the government’s preservation efforts, was removed from the organization’s List of World Heritage in Danger in 2009.

Since then, though, as the site and its surroundings have been heavily renovated there have been a number of allegations of illegal construction. The Four Seasons Baku, a luxury hotel on Neftchilar Avenue, is often the central figure of the debate, as many have questioned how such a large construction project was authorized so close to the historic site. (Hotel officials have denied that its construction caused any damage.)

Although Aliyeva (who is also the wife of President Ilham Aliyev) said that she would not comment on the role that the social media outrage played in her outreach effort, the old city's official Facebook page took a more aggressive approach, calling the sharing of the photos “biased steps totally contrary to reality” that depict a 2011 restoration of a section of the wall, rather than any current development.

Asgar Alakbarov, the chairman of the organization that manages the site, then clarified to reporters that there was ongoing construction, explaining that “at present, the administration is restoring cafes and restaurants located…along the walls.”

That didn’t mollify skeptics, and a second wave of social media outrage criticized the management of the site in broader strokes. Political cartoonist Gunduz Aghayev depicted a tower along the old city wall surrounding a toilet, with a caption asking “are restaurants and cafes more important than historic sites?”

To help tamp down the controversy, the site organized a media tour for bloggers to show them that no damage has been done during the construction process. But the effort produced mixed results.

Zahra Badalbeyli, a blogger and poet who grew up in the old city, explained in an interview with Baku TV that she was initially outraged when she saw pictures being spread on social media but later found out that they were old images. She said she now urges the public to verify information before reacting.

Another blogger, Yashar Huseyn, said he remained concerned, pointing out that according to the formal “Regulations of Protection of Icheri Sheher,” all construction should be at least three meters from the walls, when in reality, many establishments are only 10 to 15 centimeters from the walls.