An anthology of lazy election fraud in the ex-Soviet petrocracy 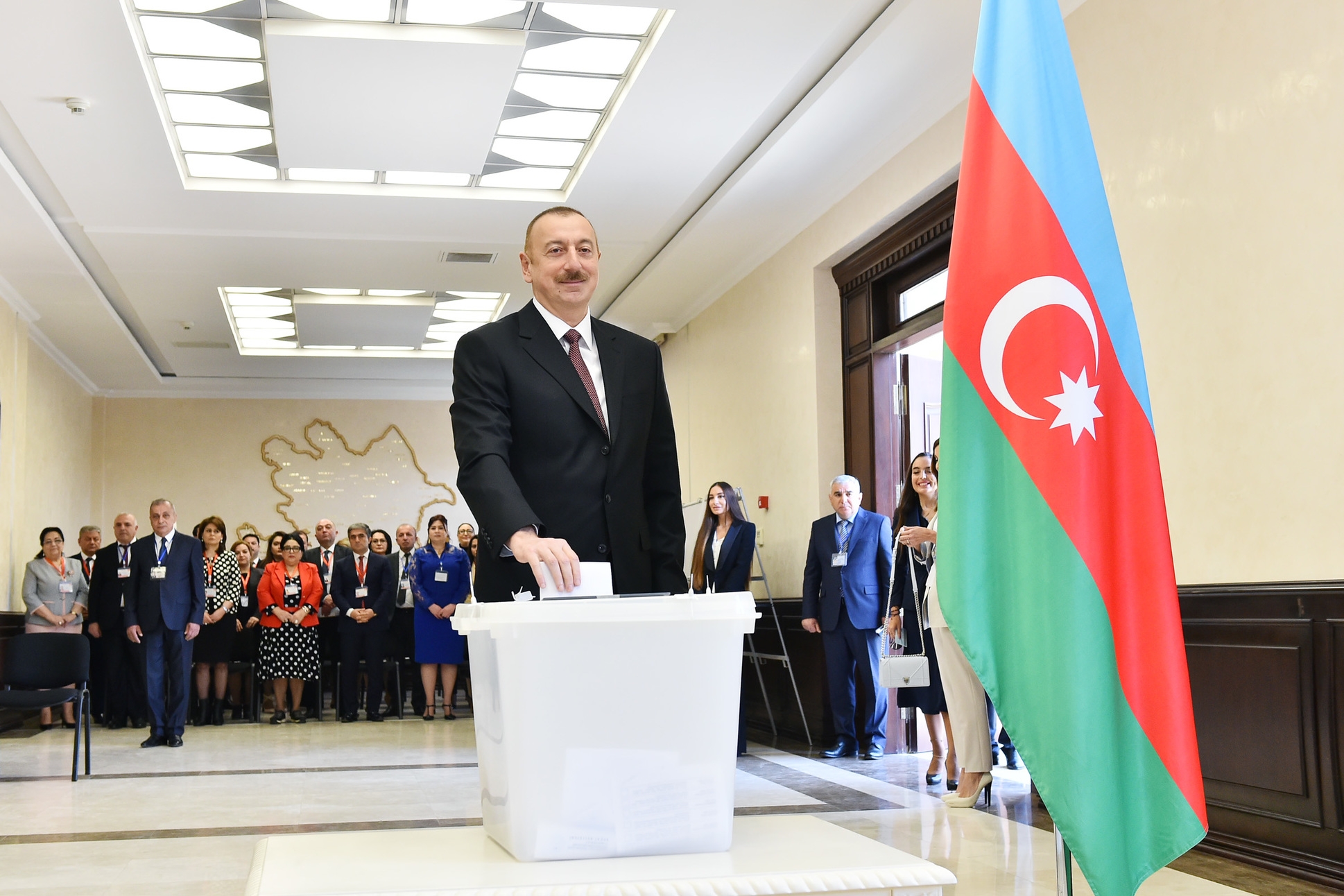 Azerbaijan's presidential election was, as predicted, a non-event. Ever-incumbent leader Ilham Aliyev won his fourth consecutive term with an 86 percent landslide, while his token rivals got crumbs of voter support – in the low single digits – according to early official results. Nevertheless, the vote did manage to produce a number of oddities.

1. Statistical Wonders. For starters, the vote tabulation results will challenge anything you thought you knew about probability theory. For example, one of Aliyev’s rivals, Araz Alizadeh, appears to have received exactly two votes in each and every one of the 35 polling stations in one electoral district in the north-western exclave Nakhchivan. A screenshot of this miraculous phenomenon is making the rounds online, with some suggesting that the number 2 was simply dragged and filled in the spreadsheet column.

But the statistical miracles in Nakhchivan did not end there. By a freak of statistical nature, somehow the voter turnout was exactly the same for all the stations at every given top of the hour. So, by 10 am every single station had seen 22.4 percent of its voters show up; at noon, it was 36.8 percent at every station. And so on.

2. Gentlemen’s Race. All the other candidates conspicuously shied away from taking shots at the incumbent’s 15-year record during the campaign period, but that was only half the story. One of Aliyev’s supposed rivals even voted for him. Almost 60,000 Azerbaijani voters appear to have wasted their time casting votes for Hafiz Hajiyev, the flamboyant leader of the Modern Musavat Party, as Hajiyev's own vote went to Aliyev. Hajiyev expects the big boss to return the favor and appoint him prime minister.

3. Voter Voodoo. One electoral official was caught on a webcam burning dried herbs to smoke out evil spirits from her polling station. Well intentioned as she may have been, international election monitors would rather have had poll workers stick to the prescribed procedures. “Election day was characterized by a widespread disregard for mandatory procedures, numerous instances of serious irregularities and lack of transparency,” said OSCE/ODIHR, an international observation mission.

4. Doppelgangers, Doppelgangers Everywhere. In neighboring Georgia, when commenting on suspiciously bloated voter rolls, one mordant wit once posited that elections are the only time that citizens multiply without sexual acts being involved. In Azerbaijan, thanks to webcams, some voters were seen replicating themselves at several polling stations. Either Azerbaijan has a lot of similar-looking and similarly dressed people or some voters exercised their civic duty multiple times.

Web cameras also captured what appear to be cases of ballot-stuffing, with some election officials themselves shoving papers in ballot boxes. International election monitors said they observed “ballot box stuffing, series of seemingly identical signatures on the voter lists, and group, proxy and multiple voting.”

5. International Observers, Get Out. Azerbaijani authorities themselves invited Europe’s main agencies for international election observation to watch the Azerbaijani vote. But after these agencies’ joint mission described the vote as undemocratic, Azerbaijani officials showed them the door. Azerbaijan’s foreign ministry handed the mission a protest note and a public reprimand after the observers made a joint statement, criticizing the election at every level. “They can take their statement and […] take it back with them,” said Siyavush Novruzov, parliament member from Aliyev’s Yeni Azerbaijan Party.

Domestic critics say that with free media and real political opposition kicked to the curb, and critical voices constantly repressed, Aliyev easily extended his dynastic rule (his father, Heydar Aliyev, was the previous president) by seven more years through a not-too elaborate show. Even international observers, who tend to couch criticism in diplomatic terms, commented that in “a political environment where democratic principles are compromised and the rule of law is not observed, fair and free elections are not possible.”

Nevertheless, after the results were announced the president, president’s son and President-elect Ilham Aliyev enjoyed congratulations from foreign leaders around the world. The president of neighboring Georgia congratulated Aliyev saying a bit vaguely that “centuries-long friendly relations between Georgia and Azerbaijan will continue to serve the welfare of our peoples.”

Russia’s Vladimir Putin, who also got reelected for a fourth term a month ago, was significantly more fulsome in his praise: “The landslide victory in the presidential election testifies to the high political authority of Ilham Aliyev, as well as recognition of his merits in solving the relevant socio-economic and foreign policy tasks facing Azerbaijan.”