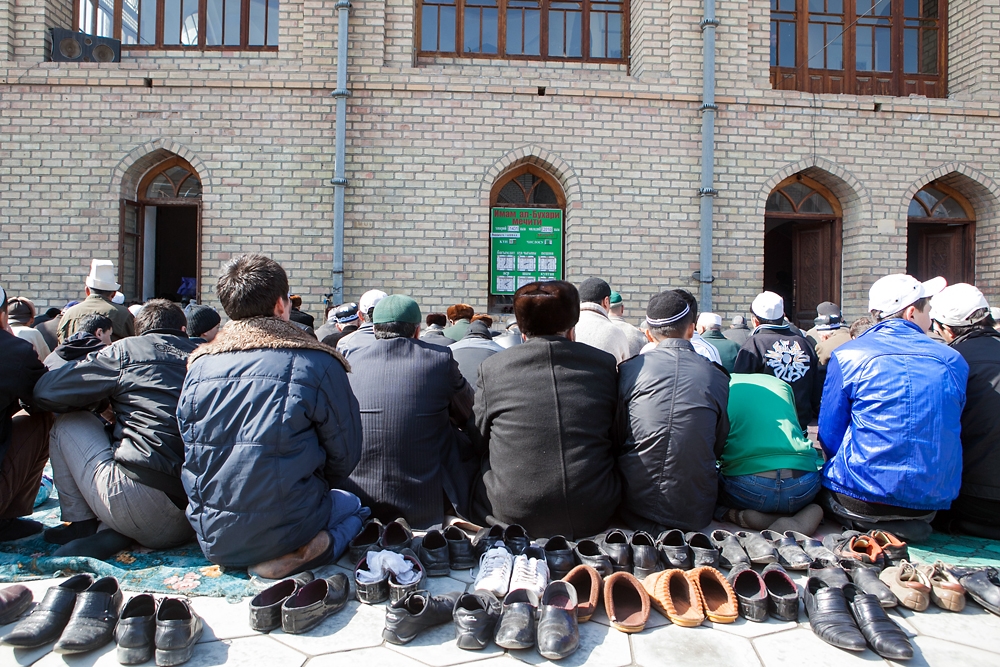 Young and old gather for Friday prayers at the Imam Al-Bukhari Mosque in Osh. Kyrgyz officials point to the southwestern part of the country as a center for recruitment of Islamic extremist fighters. (Photo: David Trilling)

In June 2013, when Botir told his parents that he was leaving his village in southern Kyrgyzstan for Turkey to find construction work, they were worried. The 30-year-old shopkeeper had only recently been released from prison after serving a short sentence on terrorism-related charges.

A month later, the worry turned to horror when the family learned that Botir had left with a fake passport. His real aim had been to join Syrian rebel forces in waging jihad against Bashar al-Assad’s regime.

During a visit to Botir’s family on a warm Saturday afternoon earlier this month, nothing portended tragedy. Watering plants in her garden, Botir’s mother Dina, a Kyrgyz-language teacher at a local school, said the family had gotten over the initial shock and that things were looking up. (Both names have been changed to protect their identities).

“He calls me regularly and tells me that he is so happy fighting for a good cause. He keeps inviting me there, saying that Syria is an ideal place for Muslims,” Dina told EurasiaNet.org. She added that Botir also managed to send money to his family and that his wife and two children had joined him.

During the visit, Dina’s phone rang. After a few words she burst in tears. It was Botir’s wife on the line, calling with the news that he had been killed in a skirmish between Syrian rebel factions. Botir’s wife later told EurasiaNet.org that she had learned about his death from his fellow fighters.

Dina cannot tell friends and neighbors the news. She says the need for secrecy – to protect her and her family from suspicious law-enforcement agencies – makes the loss even harder to bear.

Kyrgyz officials estimate about 70 Kyrgyzstani nationals, mostly from the conservative south, have joined Syrian rebel groups. Earlier this month, officials said they had brought home three (with the help of Turkish authorities) and detained five more potential recruits in the southern town of Jalal-Abad over the past year.

Some officials say a clandestine network of recruiters is operating in Kyrgyzstan. Others say recruitment is primarily Internet-driven. An officer with the anti-terrorist unit of the State Committee on National Security (GKNB) told Vechernii Bishkek on May 13 that online groups dupe young Kyrgyz with offers of academic scholarships and jobs in Turkey. When they reach Turkey, he said, they are dispatched to Syria to train and “become cannon fodder.”

In the smoke-and-mirrors world of Central Asian terror talk, it is difficult to judge the seriousness of militant threats. Authorities throughout the region tend to exaggerate dangers in order to justify their poor human rights records. But lately the consensus among experts is that some Kyrgyz are indeed fighting in Syria.

“We know the problem is real. What we don’t know is how many Kyrgyz citizens are there, which [rebel] group they are fighting for, and why they left their homes,” said a Bishkek-based expert on religious policy.

Botir’s life provides some clues. In a February 2013 conversation, Botir said he had had a troubled childhood, bullied by his father. In impoverished southern Kyrgyzstan, he had trouble supporting his young family and found little meaning in life.

But harassment from venal officials and a brief stint in jail appears to be a factor, too. In early October 2011, GKNB security officers arrested Botir and 10 other people in Osh and Kara-Suu on suspicion of belonging to the Islamic Jihad Union, a terror group recognized in Central Asia and the West. Botir denied the accusations. He said he was tortured into making a confession, but received a short sentence because his family scraped together $10,000 to bribe the judge. (Botir’s father confirmed to EurasiaNet.org that he had paid the lion’s share of the bribe).

After his release, Botir said he faced constant extortion attempts both by local police (to whom he had to report each week) and Kyrgyz criminal gangs with whom he served time. His relatives regularly chipped in to save him. In the conversation a few months before he left for Syria, he said he felt trapped. “Going to Syria was an escape for him,” said Dina, his mother.

There is no reliable polling data on Kyrgyzstani views toward the fighting in Syria. In southern Kyrgyzstan, Botir and other recruits seem to elicit a variety of views. Some, like his father, denounce him. But in his village, which cannot be identified to protect the residents, some young men see Botir as a hero.

“He is fighting for a good cause. And if he dies, he will become a shahid [martyr] for defending innocent Muslims. Of course I admire him,” said Tohir, an underemployed 20-year-old, shortly before news of Botir’s death reached home.

Kyrgyz authorities are clearly alarmed at the growing observance of Islam. In February, President Almazbek Atambayev instructed officials to increase monitoring efforts. But he did not propose concrete measures, instead focusing on cosmetic concerns: “there are many people with long beards on our streets now. They force our girls to dress in black instead of light and colorful clothing,” the president said. Observers contend that such messages underscore authorities’ lack of awareness. This failure to understand the social and economic forces at work, they add, may prompt officials to embrace repressive measures that end up radicalizing disaffected believers, such as Botir.

Some local authorities in the south say the central government is doing little that is productive in addressing the challenge. “They [central authorities] instructed us to increase vigilance and conduct explanatory work among residents on the dangers of going to Syria. We can try to talk to people, but we can’t physically prevent them from leaving the country. We don’t have the resources,” said a tax official in Osh Province.

It is unclear whether recruits fighting in Syria may one day return home, and, if they do, what kind of threat they might pose. Botir’s wife told EurasiaNet.org by phone from Turkey that she is not planning to return because she fears potential repercussions.