The company’s defenders in the U.S. Congress have been portraying Tbilisi’s suit against it as the product of Russian influence. 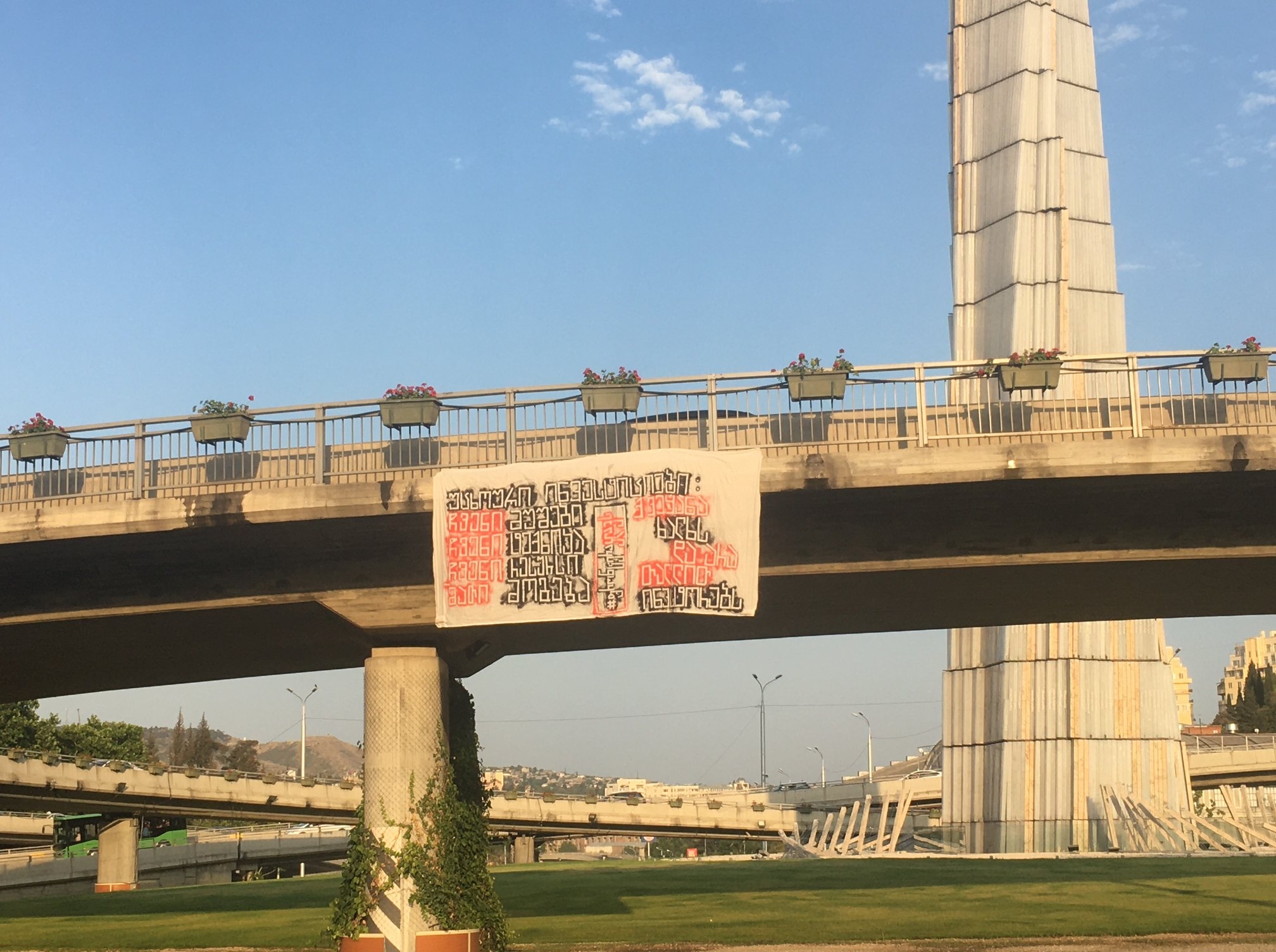 Activists unfurl a banner on July 20 in Tbilisi reading: "Foreign investment in Georgia: Our workers Our equipment Our resources Their profit." (photo: Facebook, Georgian Young Greens)

Following pressure from the U.S., Georgia has reversed its decision to break its contract with an American oil and gas company.

The announcement by the Ministry of Economy and Sustainable Development framed the decision solely in terms of Georgia’s relations with the U.S., putting in stark relief the influence that Washington wields in Tbilisi.

The Georgian government had terminated its agreement with the Texas-based company, Frontera Resources, in April, after an international arbitration tribunal ruled that the company had breached its contract with the Georgian state energy firm.

Frontera has few defenders in Georgia; it is widely seen across the political spectrum as untrustworthy and unscrupulous. In addition to the breach of contract, the company had not paid workers for many months. Earlier in July, a Frontera employee committed suicide after not having been paid for more than a year.

But Frontera has managed to gain a handful of supporters in the U.S. Congress, who have been undertaking a campaign for several months – since the government decided to pursue arbitration – to cajole Tbilisi into letting the company continue to operate. Members of Congress (many of whom have taken campaign donations from the company) have claimed that the Georgian government’s case against Frontera was the result of Kremlin influence on the ruling Georgian Dream party.

While those claims are unsubstantiated, they appeared to gain some traction in Washington. On July 9, the House Appropriations Committee passed a spending bill that would cut part of the U.S.’s aid package to Georgia by 15 percent if Tbilisi failed to fulfill several demands, including “protecting the rights of foreign businesses to operate free from harassment.”

Georgian Dream officials complained, following the threat of cutting aid, that Frontera had been unduly influencing Washington’s decision-making. “Everyone needs to understand that this is just one group that believes that the issue of Frontera is of special importance and they don’t care that they [Frontera] failed to meet their contract with the state [of Georgia], left many people without jobs and pay,” speaker of parliament Gia Volski said at the time.

The Georgian government is deeply sensitive to how international investors perceive its business environment; the World Bank’s most recent “Doing Business” rankings put the country at seventh place in the world. Accordingly, the government tends to take a light touch with foreign investors; labor rights groups said that the suit against Frontera was the first time Tbilisi had taken such action against a business operating in Georgia.

In the end, the fear of displeasing Washington – even some marginal voices there – appeared to change the government’s mind.

"Relations with the United States, which is the main strategic partner of our country, is a fundamental and principled issue for us,” the Ministry of Economy and Sustainable Development said in its statement. “Although the issue of Frontera is not a topic of discussion in official relations at all, it is unequivocally undesirable for us to give anyone in America's highly diverse political spectrum a pretext to use this absolutely routine commercial dispute to harm the strategic relations between our countries.”

“How embarrassing that a handful of rented U.S. politicians who are nobodies in America have bamboozled the Georgian government,” wrote Sopo Japaridze, the head of Solidarity Network, an independent Georgian trade union, on Facebook.