The losses to tax revenues will hit the de facto Nagorno-Karabakh government even harder than Yerevan. 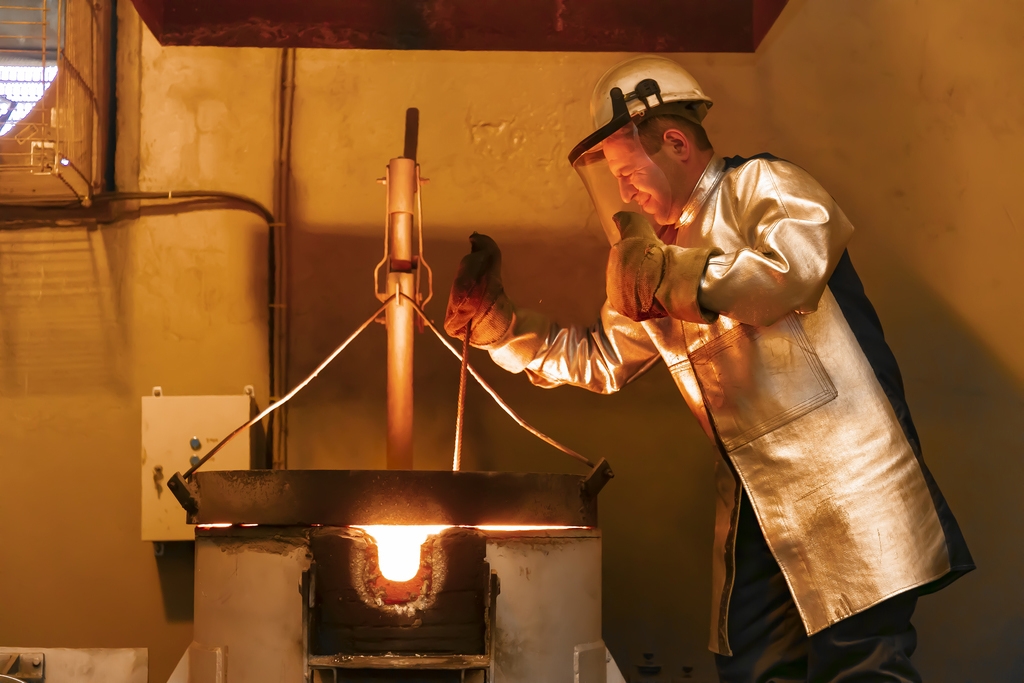 The end of a golden age? (photo: GeoProMining)

Thirty days into the brutal war between Armenia and Azerbaijan last autumn, a small, London-listed company staked its claim to what lay beneath the killing fields.

Anglo-Asian Mining had been waiting for decades. Since 1997, the company has held the rights, granted by Azerbaijan, to three gold deposits beyond its reach, in territories controlled by Armenians. In an October 27 press release it announced that it was looking forward to tapping its 300-square-kilometer Vejnali contract area, which had just been retaken by Azerbaijani troops: “Once secure, the company plans to immediately start work.” After the fighting ended, some two weeks later, Armenian troops handed back more gold-mining areas, including the Kelbajar region, home to one of the most productive gold mines in the Caucasus.

"Taking into account the obstacles caused by land losses as a result of hostilities, the Artsakh government will not be able to provide the revenue to fund its budget not only this year, but also in the coming years. According to my calculations, tax collection in Artsakh will be reduced by 40 billion drams [$80 million], or 65 percent,” Yerevan-based economist Suren Parsyan, who is connected to Armenia’s opposition, told Eurasianet.

The 44-day war that ended on November 9 radically changed the map of the South Caucasus – and with it, the economic foundations of Nagorno-Karabakh and Armenia. Now, after pushing for years to attract international attention to what it describes as the looting of its territories, Baku’s timing is auspicious: Around the world, investors are piling into precious metals as a hedge against inflation, which is expected to rise globally with coronavirus stimulus policies. The price of gold has jumped about 19 percent in the last 12 months. Copper futures hit multi-year highs this month.

The precise economic stakes for both Armenia and Azerbaijan are obscured by opaque governments. Mining enterprises in Armenia are obliged to disclose little information; activists’ repeated efforts to introduce transparency requirements have failed. We are only able to deduce the scale of miners’ contributions to Yerevan’s and Stepanakert’s coffers because both do release figures on large tax payments. Azerbaijan’s gold industry, for its part, has been tarnished by investigative reports showing how, in other mining ventures, President Ilham Aliyev’s daughters Arzu and Leyla Aliyeva extracted millions of dollars in profits, stashed them offshore, and then left rural mining communities, in the words of the Organized Crime and Corruption Reporting Project, “high and dry.”

During Armenia and Azerbaijan’s first war over Nagorno-Karabakh as the Soviet Union collapsed in the early 1990s, Armenian troops took control of the territory and seven adjoining districts – all internationally recognized as belonging to Azerbaijan. The war ended, after tens of thousands of deaths, in a 1994 ceasefire that largely held until late 2020. Nagorno-Karabakh had declared itself independent and become an unrecognized satellite of impoverished Armenia.

Only three years after the ceasefire, a Delaware-registered company, R.V. Investment Group Services, signed an agreement with Baku for exclusive rights to six mines, three of them on territories under Armenia’s de facto control.

The man who signed that agreement is Reza Vaziri, a former official in Iran’s pre-revolutionary government and today the president, CEO, and largest known shareholder in Anglo-Asian Mining, which operates exclusively in Azerbaijan.

The company did not respond to requests for comment.

Anglo-Asian Mining has enjoyed a sharp uptick in the price of gold since the 2008 financial crisis. In a preliminary 2020 report released on January 14, Vaziri said the company enjoyed “record revenues … in excess of $100 million” last year from its operations in two mines to the north of Nagorno-Karabakh – Gosha and Gedabek.

With licenses “restored” by the most recent war, Anglo-Asian Mining expects “to deliver substantial shareholder value over the coming years,” Vaziri said, adding, “we will start evaluating additional development of our licenses in the restored Vejnali, Soutely and Gyzilbulakh contract areas as soon as practically possible.” 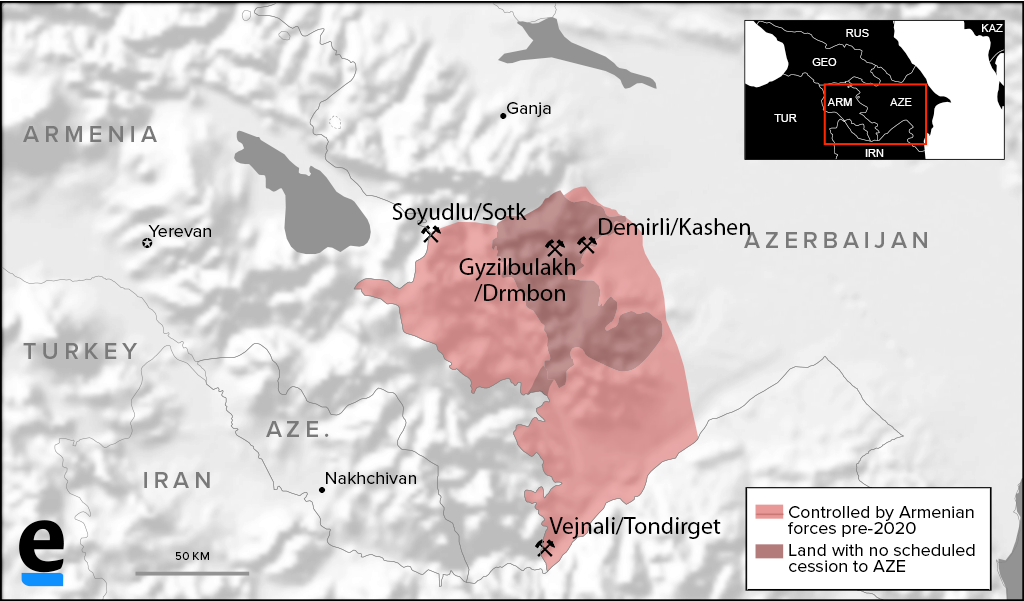 The mines to which Anglo-Asian Mining holds rights:

Until work was suspended in November, the open-pit Soyudlu gold mine (also known as Soutely, Zod, or, in Armenian, Sotk) on the border between Azerbaijan’s Kelbajar district and Armenia was exceptionally productive. It was being operated by GPM Gold, the fourth-largest taxpayer in Armenia in 2020 according to the State Revenue Committee, when it paid over 30 billion drams ($58 million) into government coffers. As of October, the mine, which also produces silver, employed 1,654 people.

GPM Gold is wholly owned by Cyprus-registered GeoProMining Investment, which is managed through a web of offshore outfits. Last summer Russian real estate and airport tycoon Roman Trotsenko became the controlling shareholder of GeoProMining. Trotsenko is a former advisor to Igor Sechin, the CEO of Russia’s biggest oil company, Rosneft, and a close ally to Vladimir Putin.

Sotk grossed $126 million in 2019, by far GeoProMining’s largest operation. The company’s website says the mine yielded 130,000 ounces of gold in 2018 and has an operating life of another 18 years. Yet its bondholders cannot be pleased: In its audited 2019 financial report, the company did not list Azerbaijan as a political risk; in fact, the document did not mention Azerbaijan at all. (Neither, for that matter, did the big ratings agencies.)

Inside Armenia, GeoProMining also operates the Ararat Gold Recovery Plant, which it upgraded in 2014, and a copper-molybdenum plant in the south. In Russia, it operates several fields in Siberia.

If any of these mines offers Armenia and Azerbaijan an opportunity for mutual benefit, it is Soyudlu/Sotk. But that would require cooperation. Armenian officials have said that half the mine is on Armenian territory, while an Azerbaijani official has said that 74 percent lies on Azerbaijani territory. When Azerbaijani troops took back control of Kelbajar as part of the November peace deal, the local village head said they forced Armenian workers to leave – a claim Yerevan denied. Azerbaijan’s Defense Ministry released this video of the site after it had been deserted.

Discovered in the late 1950s and confirmed to hold up to 6.5 tons of gold, in recent years Vejnali has been mined by a company called Gold Star, which was the fourth-largest taxpayer in Nagorno-Karabakh in 2019 according to the State Revenue Committee. Little is known about the company, though a 2020 financial report seen by Eurasianet shows a 1 billion dram ($2 million) loss. Gold Star is run by a Swiss-Armenian citizen, Vartan Sirmakes, who is Armenia’s consul in Marseille, France, and co-founder of luxury watch brand Franck Muller. Baku has sought Swiss help prosecuting Sirmakes for his role in operating the mine.

Armenian environmentalists have complained of a lack of oversight at the mine.

Until the 2020 war, these two mines were operated by Karabakh’s largest taxpayer, Base Metals, which paid 18.7 billion drams ($38.5 million) to the treasury in 2019; by the company’s calculations, it alone was responsible for 32 percent of Karabakh’s revenues. Parsyan, the economist, estimates that the firm accounted for 60 percent of exports.

Base Metals is owned by Vallex Group, which has holdings in metals, IT, and tourism in both Armenia and Nagorno-Karabakh – it even helped sponsor a key highway between Armenia and Armenian-held territories that opened in 2017. Armenia lost control of the highway during the recent war.

Vallex confirmed to Eurasianet that operations at both mines – which are 15 kilometers apart as the crow flies – have been on hold since the war. The company was unable to answer questions by the time of publication, but a source close to the Karabakh authorities told Eurasianet that both mines remain under Armenian control, though Azerbaijani troops had taken a crucial pumping station, without which neither mine cannot operate. Karabakh’s de facto minister of territorial administration and development, Zhirayr Mirzoyan, has told Armenian investigative news site Hetq that building a new pumping station would be time-consuming and expensive.

Gyzilbulakh (Drmbon in Armenian) is an underground copper and gold mine founded in the early 2000s. Almost a decade ago, it was reportedly nearing the end of its working life.

Azerbaijani prosecutors have accused Vallex and Base Metals of "almost complete depletion" of Gyzilbulakh, earning some 302 million manats ($178 million today) in "illegal profits" between 2009 and 2017. A 2019 report from Azerbaijan’s MFA and based on high-resolution satellite imagery included concerns about the tailings pond where chemical waste is stored at Gyzilbulakh.

In a January 21 statement, Anglo-Asian Mining claimed the site had been restored to Azerbaijani control and that, because it sits within Nagorno-Karabakh, it is protected by Russian peacekeepers. Access, the company said, “will depend on the final resolution of the status of Nagorno-Karabakh.”

Yet more of a prize today is the nearby Demirli (Kashen in Armenian) open-pit copper and molybdenum mine near Aghdara (Martakert), said to hold 100 million tons of copper. Vallex claimed in July 2020 that it had invested $250 million in the site, which employed almost 1,500 people.

Azerbaijan’s prosecutor has charged Vallex’s president, Russian-Armenian Valeri Mejlumyan (no relation to one of the authors), with illegal extraction and belonging to an organized criminal group.

This is not Vallex’s first setback. In 2018, the company had its Teghut copper and molybdenum mine in northern Armenia seized by its Russian creditor, VTB Bank, after being unable to service a $380 million loan during a shutdown linked to concerns about the environmental impact of tailings dumps.

Anglo-Asian Mining’s strong balance sheet suggests it will have fewer troubles than Vallex. It also shows how the Aliyev family casts a long shadow over any lucrative industry in Azerbaijan.

The same year the first daughters were purportedly leaving hundreds of Azerbaijani miners high and dry, Anglo-Asian Mining received a $3 million credit line from Baku-based Pasha Bank. The bank lists the Aliyeva sisters and their maternal grandfather as its ultimate beneficial owners.

Anglo-Asian Mining – which is now debt-free – is also well-connected in the United States.

After Vaziri, the company’s second-largest shareholder is former Governor John Sununu of New Hampshire, who served as President George H. W. Bush's chief of staff and owns 9.4 percent of the company, a stake worth about $25 million. Sununu’s son Michael is also on the board. Another son, Chris, is currently a first-term governor of New Hampshire.

Meanwhile, the government in Baku is taking its message abroad. If the Armenian companies "do not pay compensation," Aliyev said on January 6, Baku will pursue international arbitration. "There is no place in the modern world for companies and people who illegally exploit natural resources in another country and make a profit from that. Therefore, they must calculate the value of the gold and other natural resources they illegally exploited, calculate the damage they have caused, the income gained, and compensate us."

With record high prices for commodities, plus hopes for an economic rebound in 2021 fueled by a COVID vaccine and loose monetary policy, and excitement about new green technologies built with the kinds of metals under the soil in Karabakh, Baku must be eager for Anglo-Asian Mining to start digging. Across the frontier, the losses threaten to leave Armenians out of the next economic recovery.