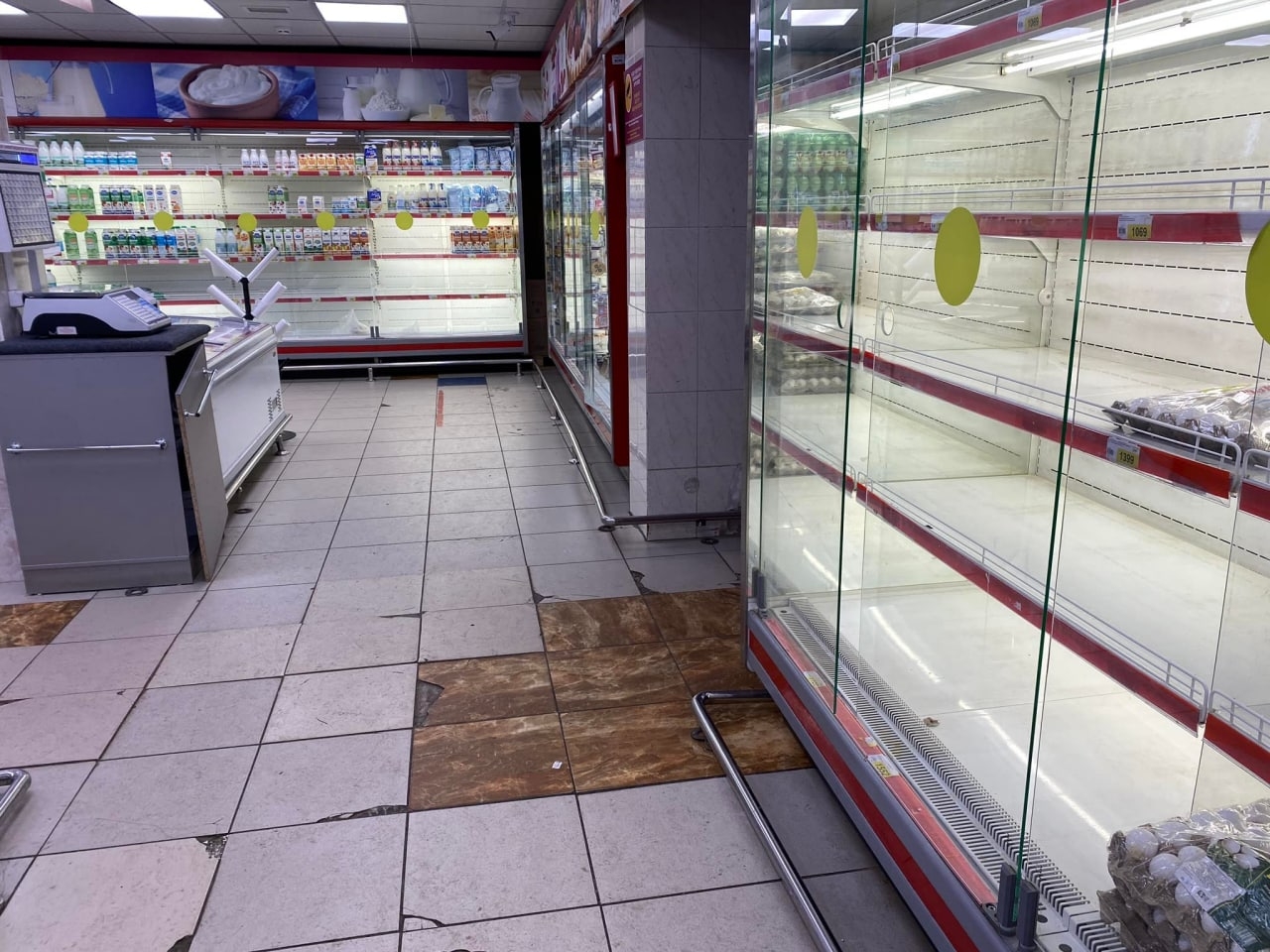 A supermarket in Nur-Sultan on January 7 (KZ.media/Telegram)

Kazakhs woke on January 8 to find themselves, for the fourth straight day, cut off from the world. Without an internet connection – essential there, too, for modern services, including paying for goods – many were also beginning to run out of food.

Around 95 percent of internet users in Kazakhstan have been unable for the most part to get online since January 5, according to NetBlocks, a data provider. KazakhTelecom, the state-owned telecommunication giant, began throttling access on January 4 amid nationwide protests that began over fuel prices and quickly swept a nation with longstanding grievances about inequality and corruption.

The worst hit city is Almaty, epicenter of a violent government crackdown that has left dozens dead. Yet even there, several customers of the Russia-owned Beeline mobile service reported they could get online at times, and many sites are blocked. Telephone connections come and go, though data and cellular connections appear to be better in western Kazakhstan, which has been spared the violence. Even government websites have been forced offline.

Many Kazakhs do their daily shopping with debit cards. These were often rendered useless by the outage because payment terminals depend on internet connections. By the end of the week, long lines were forming at ATM machines in Almaty, Nur-Sultan and Aktau as residents sought cash to procure staples.

Nurserik Zholbarys, a resident of Nur-Sultan, told Eurasianet that he stood over 30 minutes in a line to withdraw 10,000 tenge ($23) from a SberBank ATM machine in Nur-Sultan’s fashionable Esyl district. This is the daily limit imposed on those who can find a working ATM: The National Bank suspended commercial bank services on January 6; some fear they will not be available again until the state of emergency is lifted.

Lada.kz, a media outlet in the western city of Aktau, also reports long lines for bank machines. “Most ATMs have run out of cash,” the outlet said on its Telegram channel on January 7, pointing readers to one functioning ATM at a Halyk Bank.

A Nur-Sultan-based economist said the 10,000 tenge limit is effective in that it helps commercial banks avoid panic withdrawals.

“The internet outage showed how the nation’s economy wholly depends on it. Cashless payments went down, food supply chains were disrupted, long lines formed in supermarkets. It has sent our society back to the early 2000s,” the economist said just before his connection died, and before Eurasianet could ask permission to print his name.

Kultegin Aspanuly, an Orda.kz reporter in Aktau, a city of 180,000, told Eurasianet that residents are helping each other out.

“Store owners understand that people have money in their bank accounts, but have issues with withdrawals. So, they are giving out food essentials based on trust that customers will pay later when commercial bank services are restored,” Aspanuly said.

Residents of Almaty report difficulty finding food as periodic bursts of gunfire continue to ring out in the city of 1.8 million, Kazakhstan’s largest.

Though the protests that have shaken Kazakhstan more than any event since the fall of the Soviet Union began this week in nearby Zhanaozen, the surrounding Mangistau region saw mostly peaceful and well-organized rallies. Protesters are still standing in central squares demanding political reforms, while bigger cities like Almaty, Shymkent and Kyzylorda have seen provocative destruction, looting and bloody confrontations with security services.

In a defiant televised address on January 7 in which he ordered security forces “to shoot to kill without warning” and blamed unnamed foreign terrorists for the unrest, without providing evidence, President Kassym-Jomart Tokayev promised to lift the internet restrictions.

“As the situation is stabilizing, I have decided to turn on the internet in some regions of the country at certain time intervals. This decision, I am sure, will have a positive effect on the life of our citizens,” Tokayev said.

That did little to ease worries among Kazakhstanis in the West, who are concerned that, with the internet out, their loved ones didn’t hear his warning that they could be gunned down in the street.

Top10VPN, a monitoring service in London, found that the use of virtual private networks (VPNs) – software used to access blocked websites or establish secure connections – has skyrocketed in Kazakhstan, recording “a 3,405 percent surge” in demand January 5 compared to the daily average of the preceding 30 days, according to Katherine Barnett, a researcher at the outfit.

“While VPNs will not help users get around an internet blackout, this surge (which occurred before the blackout) shows just how desperate the people of Kazakhstan were to … stay online,” she said.

On January 7, Top10VPN estimated that the internet outage had so far cost Kazakhstan’s economy $189 million.

The problem has spurred some grassroots action among Kazakhs living in the West.

Maxat Kadyrov, a Kazakh software engineer with LinkedIn in Canada, is working with Narikbi Maksut at Booking.com in the Netherlands to help Kazakhstanis access the internet with various free VPN services.

In the last two days, they helped over 2,000 people across Kazakhstan get back online, circumventing some of the KazakhTelecom blocks.

Kadyrov said the government is firing back quite effectively, however. “Almost all VPNs we suggest to Kazakhstanis are blocked the next day. So, every other day, we are switching to another VPN service,” he told Eurasianet.