Inflation is further stifling weak demand, putting the Central Bank in a bind. 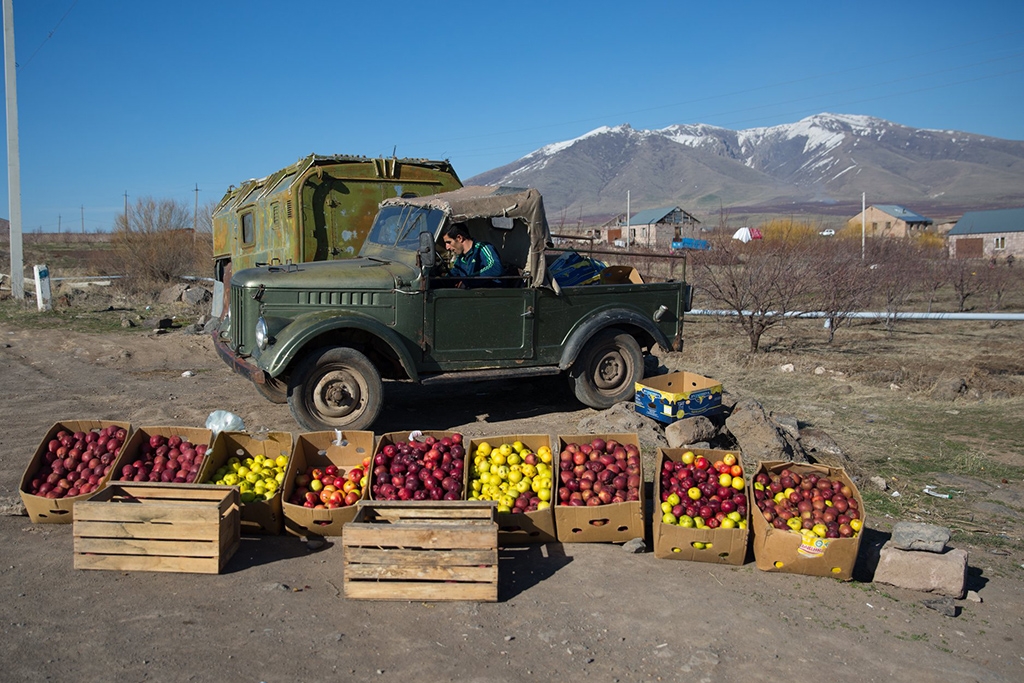 A bad harvest is contributing to rising food prices this year. (UNDP Armenia)

Food prices in Armenia are rising uncomfortably high and the causes are not easy to fix: global inflation, a bad harvest, and economic depression brought on by pandemic and war.

Prices for food and non-alcoholic beverages grew 13.5 percent year-on-year in July, according to the Armenian Statistical Committee, the largest jump since at least the 1990s.

Imported goods such as cooking oil and sugar were already up by double-digit figures in recent months, but now prices for local produce are also weighing down consumers’ baskets. This summer in Armenia has been a dry scorcher, hurting harvests.

Armenia’s Central Bank (CBA) says core inflation was up 8.1 percent in July year-over-year, the highest since 2011. The CBA, the guarantor of price stability, targets 4 percent.

In an attempt to tame this higher-than-expected inflation, the CBA raised its benchmark refinancing rate on August 3 for the fifth time in less than eight months. In June, the bank explained that the global economic recovery was causing the prices of essential food imports to rise and expected this "high inflationary environment" to persist in the months ahead.

For years, the CBA kept interest rates low to stimulate business. Now the CBA has the unenviable task of trying to keep the Armenian dram steady to moderate price increases in a low-growth environment.

GDP has been hit hard by the pandemic and the war last year with Azerbaijan. The economy contracted 7.6 percent in 2020 and the IMF expects real GDP of only 1 percent this year. That may be optimistic. The IMF had predicted food price inflation to peak in the first half of 2021 before falling to a more manageable 4 percent.

Economists are debating the CBA’s role in the crisis.

"The Central Bank, with its failed monetary policy tools, is unable to ensure price stability. In the absence of investments in the real sector such as mining [and] construction, commodity [including food] prices will continue to rise in Armenia. Even the temporary rise of the Armenian dram will not prevent the rise in commodity prices. Inflation around the world will also have an effect on Armenia," economist Suren Parsyan wrote on Facebook.

Others don’t blame the Central Bank, noting that Armenia’s situation is connected to global trends that should soon pass.

The CBA could tighten policy by raising refinancing rates “so high that money becomes expensive. Such an approach contributes to a freeze in the economy,” economist Vilen Khachatryan told local website Panorama.am. But “2021 is a year of inflation. It's happening all over the world; money is getting more expensive. The policy of our Central Bank must be synchronized with the world economy.”

After sinking in late 2020, the dram has regained value against the U.S. dollar in recent months.

That alone may not help with bread-and-butter concerns, economist Hayk Mnatsakanyan told the local website Ampop.am.

"After prices rise, they fall much more slowly. This is particularly visible in the case of gasoline prices, because importers [...] tend not to reduce prices quickly; rather they try to collect as much profit as possible," Mnatsakanyan explained, pointing to fuel prices as a particular burden for farmers.