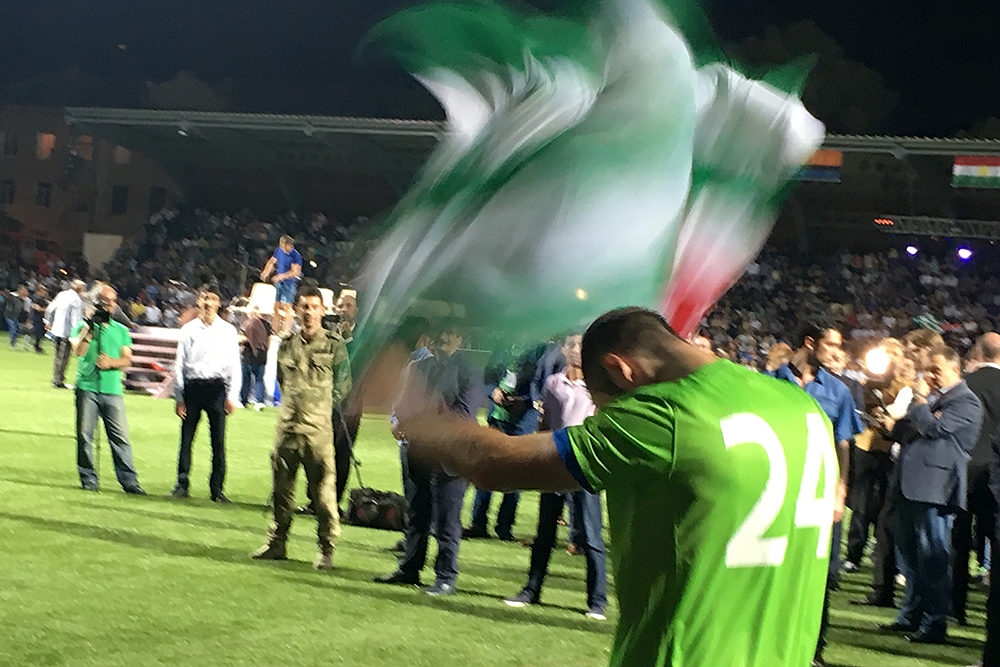 Dmitry Kortava, a 26-year-old striker, who plays in Russia's first division, waves an Abkhaz flag in celebration of the breakaway region’s victory in the ConIFA World Cup 2016. (Photo: Monica Ellena)

June is a big month for football. The Copa America tournament is underway in the United States, and the European Cup kicks off in a few days in France. But a third international tournament of sorts has already wrapped up in the separatist entity of Abkhazia.

The ConIFA World Cup is a bi-annual soccer tournament of unrecognized statelets and minority groups. In a nerve-wrenching final on June 5, the host nation, Abkhazia, beat Punjab, a United-Kingdom-based team of Punjabi-speaking players, on penalty kicks. For the Abkhaz, it was a case of victory snatched from the jaws of defeat: the team scored in the 88th minute to tie it, 1-1, and sent the game into overtime. The capacity crowd of 4,300 at Sukhumi Stadium went wild after the last penalty kick secured the championship for the Abkhaz squad.

“We believed in our people, in our team!” declared a broadly grinning Raul Khadjimba, Abkhazia’s de-facto leader, as he hung medals around the Abkhaz players’ necks. Authorities declared June 6 a holiday.

For Abkhazia, which covered the expenses of the 11 visiting teams in the May 28-June 5 ConIFA (Confederation of Independent Football Associations) World Cup, it was a chance to shine. “This tournament has shown the world we are no terrorists. We are people like any other and our team can play good-level football,” asserted Astamur Adleba, the 46-year-old manager of Abkhazia’s team and the president of Dinamo Sukhumi, a local soccer club for which he played as a goalkeeper during the Soviet era.

For all of ConIFA’s 36 members, comprising breakaway entities, stateless people, autonomous regions and minority ethnic and cultural communities, their focus is on sports, not politics.

“ConIFA was set up to give everyone the chance to play football and by doing so, it gives a voice to those who do not have it, to peoples who want [to] affirm their sense of identity,” explained the group’s president, Per-Anders Blind, a Swedish national who identifies with the Sapmi, a Scandinavian minority group. “We bring this aspiration under the flag of soccer and keep politics outside the pitch.”

The teams that participated in the Abkhazia tournament represented a wide variety of causes and groups.
Ethnic Turks from Northern Cyprus participated, as did a Western Armenia team whose players are descendants of survivors of the 1915 massacre of ethnic Armenians in Ottoman Turkey. The tournament also included the de-facto republic of Somaliland, Iraqi Kurds, ethnic Koreans from Japan, ethnic Hungarians from Romania, the alpine Raetia community from Switzerland and Germany, the Indian Ocean’s Chagos Islands, and the Sapmi.

The breakaway Caucasus regions of Nagorno-Karabakh and South Ossetia did not qualify for the championship round in Abkhazia.

Coming into the tournament, the defending ConIFA champion was Padania, a collection of several districts in northern Italy’s Po River valley. The team was set up in the 1990s as an athletic outgrowth of the Northern League, a political movement which advocated for the valley’s independence from Rome. It was revived a few years ago at the request of ConIFA’s Europe director, Alberto Rischio.

This time, however, only soccer is on its agenda.

“Padania today is a totally apolitical entity. [That status] is in our statute and in our minds,” explained Fabio Cerini, the Milan-based team’s president.

For host Abkhazia, the tournament represented a chance to show that, despite its breakaway status, it can serve as a welcoming host for international events. “There is a new feeling in town; it is wonderful,” said Mirabela Chanach, a 21-year-old physics student at Sukhumi State University. “I haven't felt so much life and excitement ever in my life. We can finally show the world who we are.”

Skeptics might note that Abkhazia gets most of its budget from Moscow, and remains dependent on Russian handouts and troops to preserve its declared independence from Georgia. ConIFA teams traveled to Abkhazia via Russia, a violation of Georgian law.

But official Russian visitors to the tournament were not visible.

It is not certain how much Abkhaz authorities spent to host the event. De-facto Prime Minister Artur Mikvabia, a former football player himself, looked surprised when asked to confirm an RFE/RL report that cited him putting the total at $3.5 million.

He told EurasiaNet.org that he could not immediately put a price tag on the tournament. He emphasized that the final bill would be “within the available budget.”

About $450,000 was spent on upgrading stadiums in Sukhumi and the northern seaside town of Gagra to host the tournament, and on repairing local roads, he said. Tickets (priced at between 500 to 800 rubles, or $7.62 to $12.19) and sponsorships provided additional revenue, he added.

The use of hundreds of young volunteers helped keep down some costs. Locals provided promotion on their own. Abkhaz teenagers wore ConIFA t-shirts and scarves, and eagerly took selfies with their smartphones.

They fêted the Padania team, which ultimately finished fourth to Northern Cyprus. Charmed, the Padania players, none of whom had ever visited Abkhazia, informally donated some soccer equipment to children and fans.

“I would have never expected such hospitality. It is overwhelming,” commented 40-year-old midfielder Andrea Rota.

Though ConIFA is a volunteer organization, it managed to get the word out about the championship to heavyweight international media outlets, which, for the first time, covered the tournament in number.

“It helped to put ConIFA on the radar. I hope knocking on doors is going to be easier from now on,” said Blind, the organization’s president.

Already, Asian host sites are beckoning: Cambodia and the Japanese island of Okinawa have both expressed interest in hosting the next championship in 2017, he said.

Correction: The name of ConIFA’s Europe director is Alberto Rischio. He was initially identified as Arturo Rischio.