For Armenians, CSTO missing in action

The Russia-led security bloc is supposed to oblige members to come to one another’s defense. But its response so far to Azerbaijan’s attack on Armenia has been anemic. 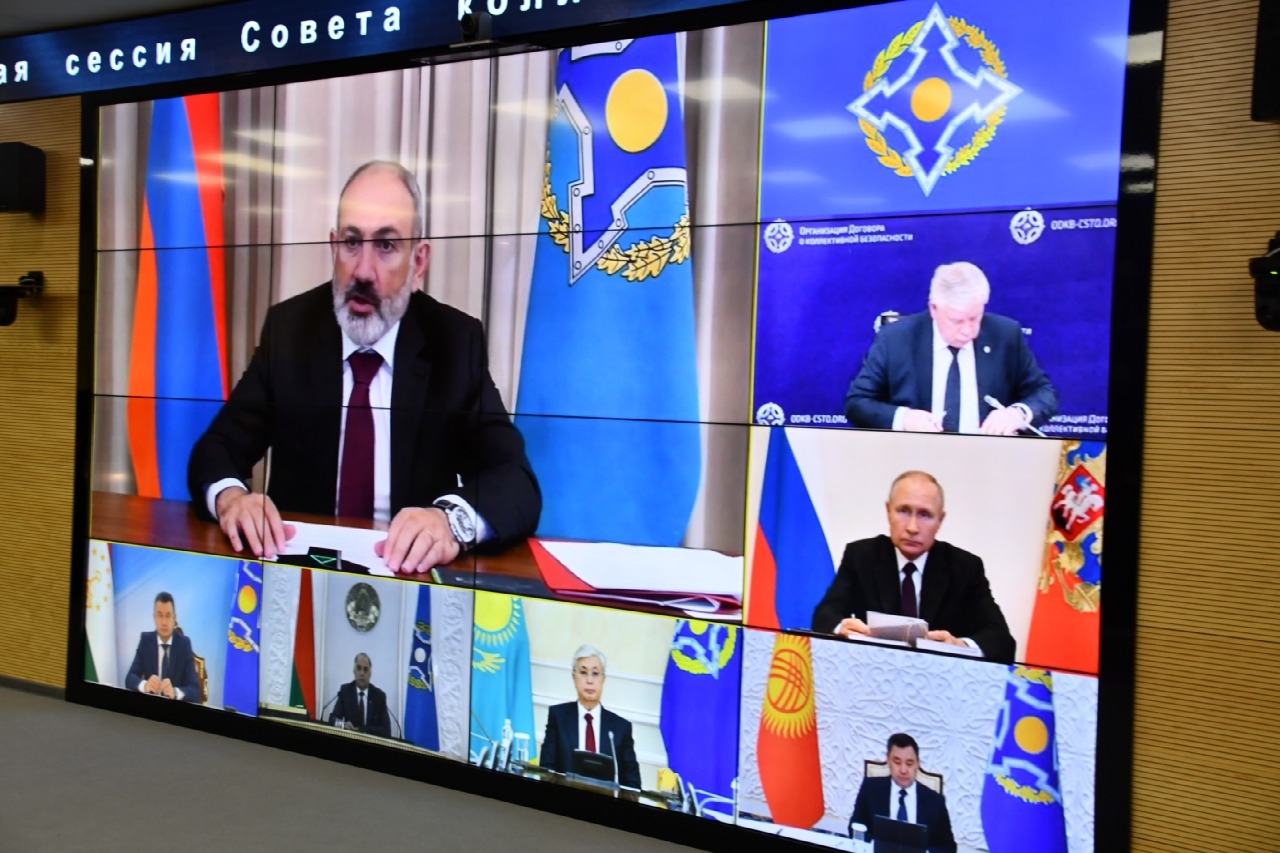 As Azerbaijan has launched attacks and reportedly seized more territory inside Armenia’s borders, the country has appealed to its treaty allies to come to its defense.

But the tepid response has further eroded Armenians’ faith in their allies – most notably Russia.

On the evening of September 13, the day the fighting started, Armenia’s government initiated a video summit of the heads of state of the Collective Security Treaty Organization (CSTO), the mutual defense pact led by Russia and also including Armenia, Belarus, Kazakhstan, Kyrgyzstan, and Tajikistan. The meeting resulted in a “detailed and frank exchange of opinions,” according to a statement from the organization.

The appeal was in response to Azerbaijan’s unprecedented attacks against targets inside Armenia, launched the day before. Article 4 of the CSTO charter states that: “In the case of aggression (an armed attack threatening safety, stability, territorial integrity and sovereignty) against any Member States, all other Member States at request of this Member State shall immediately provide the latter with the necessary aid, including military.”

The CSTO’s answer has been less than immediate. The organization resolved to send a fact-finding mission, to be headed by the CSTO's chief of general staff Colonel-General Anatoly Sidorov. Its first members were supposed to arrive in Armenia September 15; CSTO General Secretary Stanislav Zas would arrive "next week," the organization said.

Before the mission even arrived, the organization said it did not anticipate sending peacekeepers.

"Let's not get ahead of ourselves. On September 13, the heads of our states unanimously declared that political and diplomatic methods should solve this problem that exists between Armenia and Azerbaijan," Sidorov told a September 15 briefing. “Therefore the CSTO’s military involvement was not discussed on September 13, nor yesterday, nor today, and, I think, it won't be discussed in the near future.”

Armenia and Azerbaijan agreed on a ceasefire the evening of September 14, which appeared to be largely holding, though ceasefires in this conflict are notoriously fragile. So far, Azerbaijan has reported 71 service members killed in action; Armenia has reported 105.

Sidorov cited the ceasefire as justification for ruling out a peacekeeping mission. "That's why we hope that further the processes will go like this, they will be resolved peacefully, without the use of weapons," he said.

The CSTO is dominated by Russia, which at the moment appears unable to manage its own war in Ukraine, let alone intervene to assist an ally in the Caucasus. Analysts suggest that by launching the offensive, Azerbaijan is testing Russia’s resolve.

"The power of the Russian flag has declined considerably, and the security system across the former Soviet space does seem to be broken," Laurence Broers, associate fellow at Chatham House, told The Guardian. ”We are seeing the collapse of Russia's reputation as a security patron, which is happening both at the material level with the massive force concentration on Ukraine, but also on the subjective level of the reputation of Russian security guarantees.”

Even before Russia’s troubles in Ukraine, however, Armenians had been skeptical of the CSTO’s ability to act as a security provider.

The organization turned down a request from Armenia in 2021, following another Azerbaijani incursion, while it did manage to send troops to Kazakhstan to help put down anti-government protests in January.

Armenia sent about 100 troops to Kazakhstan then, annoying many Armenians who felt that the organization was using a double standard about where to intervene. At the time, Armenian government officials pushed back against that criticism.

"The public has raised concern about why Armenia appealed for help [to the CSTO] and didn't receive it, and is now providing it," Armen Grigoryan, the secretary of Armenia's Security Council, told public television. "First of all, it's a matter of responsibility, if Armenia has an interest in the CSTO mechanisms functioning, and the answer is a clear yes," he said.

This time around, Kazakhstan officials also have ruled out sending peacekeepers to Armenia.

Many pro-Western Armenians have called for the country to leave the CSTO. “If Armenia does not show determination now and does not get out of the deadlock of the CSTO-Eurasian Union-trilateral statement of November 9, 2020 [the Russia-brokered ceasefire that ended that year’s war] and does not take a step toward becoming part of the United States-France-European Union civilized system, then [Russian President Vladimir] Putin, [Turkish President Recep Tayyip] Erdogan and [Azerbaijan President Ilham] Aliyev will devour Armenia,” wrote Artur Sakunts, a human rights activist and chair of the Helsinki Citizens’ Assembly of Vanadzor, in a September 14 Facebook post.

That could cause more harm than good, Nersisyan said. “Formally leaving the CSTO could bring economic and security threats; they [Russia] are not helping but they can hurt us,” he told Eurasianet. He predicted that “CSTO and Russian inaction” in Armenia could result in the former becoming a “fairly dead organization.”

The fact-finding mission could have several goals, wrote regional analyst Dionis Cenusa on Twitter. “Perhaps Russia does not fully trust the Yerevan accounts (which Baku called provocations), perhaps the mission will be deployed in Armenia exactly as a deterrent against Azerbaijan,” he wrote. “It will be seen shortly whether the Azeri attacks in the direction of Armenia will stop after that.”