For coveted spots in China, Uzbek students ‘study like crazy’

Uzbekistan’s hardest-working students see China as a promising alternative to America and Europe. They often learn about opportunities on social media. 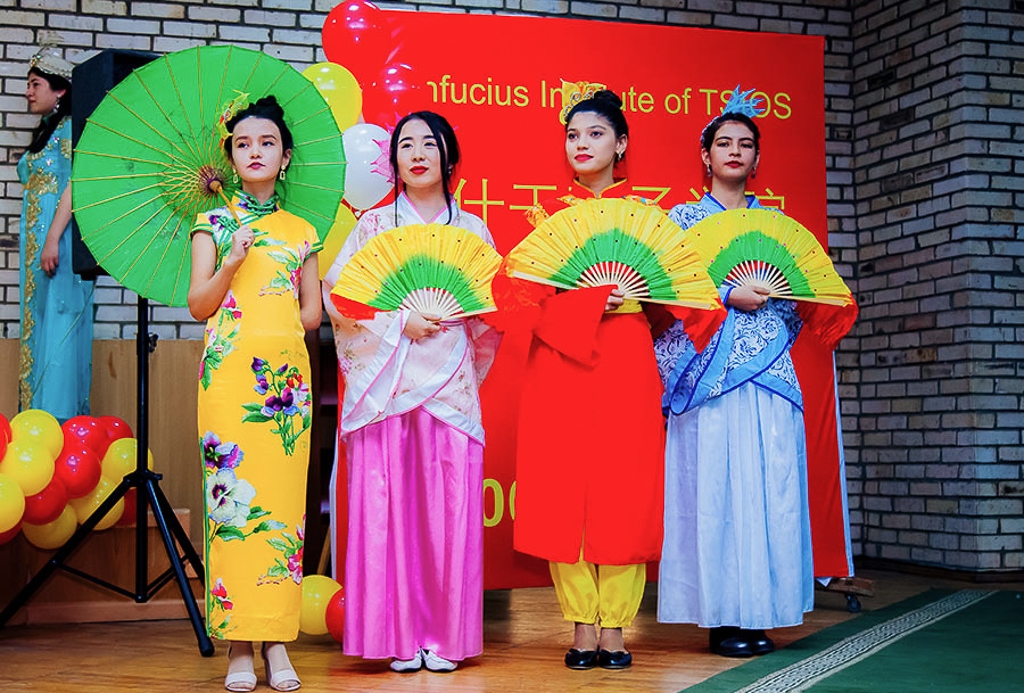 Dressing up the curriculum. (all photos: Confucius Institute of Tashkent)

University back home in Uzbekistan was “no education at all,” said Asilbek Honhodjayev. After one year at Gulistan State University, he withdrew, bored and unimpressed with the curriculum.

Honhodjayev wanted to study business in the U.S., but recoiled at the lengthy visa application and prohibitive expense. American schools “were asking for $10,000, $20,000 sometimes $35,000 [per year],” he recalled. “It was crazy for normal families like mine in Uzbekistan. For that money, you could open your own startup.”

Russia and Kazakhstan didn’t appeal – the education system is too similar.

Then his father reminded him of an Uzbek saying: “You should strive for knowledge, even as far as China.”

With the help of China Campus Network (CCN), a consortium of 28 Chinese universities recruiting international students for about $5,000 per year, Honhodjayev arrived in Xi’an in 2018. In his first few months, he studied Mandarin up to 12 hours a day. And then he won a full scholarship at the Alibaba Business School in Hangzhou, a four-year undergraduate program founded by billionaire Jack Ma of the eponymous e-commerce behemoth.

“I never thought I would end up in China,” Honhodjayev said. But for someone unafraid of work – “I work very hard. I have huge discipline in my behavior, my schedule” – the resources and technology available have made China the “perfect” place to study.

He’s not alone in finding Chinese educational standards more rigorous than at home.

“You can’t do well [in China] without studying like crazy,” said another Uzbek student in nearby Shanghai, describing how students in Uzbekistan are expected to buy good grades. “Here, it all comes down to what you know.”

“Learning Chinese is a way to build a future,” said Fahriddin Shamsiyev, the principal of School No. 59 in Tashkent, the only public school in the Uzbek capital offering Chinese.

School No. 59 was founded in the Soviet era as a spets, a specialized school, for languages. Nowadays, students are required to take Mandarin Chinese classes starting in the first grade.

“China has a magnetic pull on anyone who wants to become wealthy through business. From very early on, [parents] think about this relationship,” said Shamsiyev. Though School No. 59 is intended for kids in surrounding neighborhoods, that doesn’t stop parents from all over the city trying to enroll their children.

Their interest reflects rapidly growing economic ties with China. For the past five years, China has been Uzbekistan’s largest trading partner; more than 1,600 Chinese businesses have opened since independence.

Nevertheless, Shamsiyev struggles to attract native Chinese-speaking teachers. They “don’t want to come when they’re not going to be well paid,” he said, explaining that despite the posters of smiling Chinese and Uzbek men shaking hands, the school receives no funding directly from China. (Even so, local media reports indicate the school receives guests from the PRC frequently.) “English and Russian are still more popular, so all the [state] funds are thrown there. […] In my opinion, it’s a missed opportunity.”

“Our school isn’t the way it used to be,” Shamsiyev added, describing his experience as a student at School No. 59 in the late 1960s. “We had teachers from China in the Soviet era. Now we have only one or two. It’s tough to learn a language this way.”

‘People laughed at us for studying Chinese’

When there is funding from Beijing, competition is even more intense.

Today, over 800 students enroll annually at the Confucius Institute of Tashkent, founded in 2004 as a partnership between Lanzhou University and Tashkent State Institute for Oriental Studies. One of the earliest Confucius institutes – Chinese-government funded language and cultural programs in universities abroad – it has a network of 4,000 graduates who have studied Chinese language, history and culture.

“Many of [our students] do business with China, or they become translators,” said Ozodbek Mardiyev, a dean’s assistant.

“[Chinese influence] is everywhere in the city, and in the markets especially,” Mardiyev said, referring to the nearly $5 billion worth of Chinese goods that flow into Uzbekistan every year. “The demand [for Chinese language] is enormous.”

It also drives competition for tickets to China.

“When I was a student in the ‘90s, we all got to go to China on grants. [...] People even laughed at us when we said we studied Chinese,” Mardiyev recalled. “Then in the early 2000s, the times changed. Now, the demand is so high we can only send about 20 [students on grants per year].”

There are other scholarship opportunities, often directly from Chinese universities.

“China wants to project the image of having influence,” Mardiyev said. “[China] always wins because of its economic advantage and the unbeatably cheap prices [of its goods].”

But Mardiyev is realistic about the limits to opportunities for Uzbeks in China and tells his students, “you can’t compete with Chinese people in China.”

“Some of our students become translators and stay [in China],” he said, “but building something from zero as an Uzbek is for the most part near impossible.” 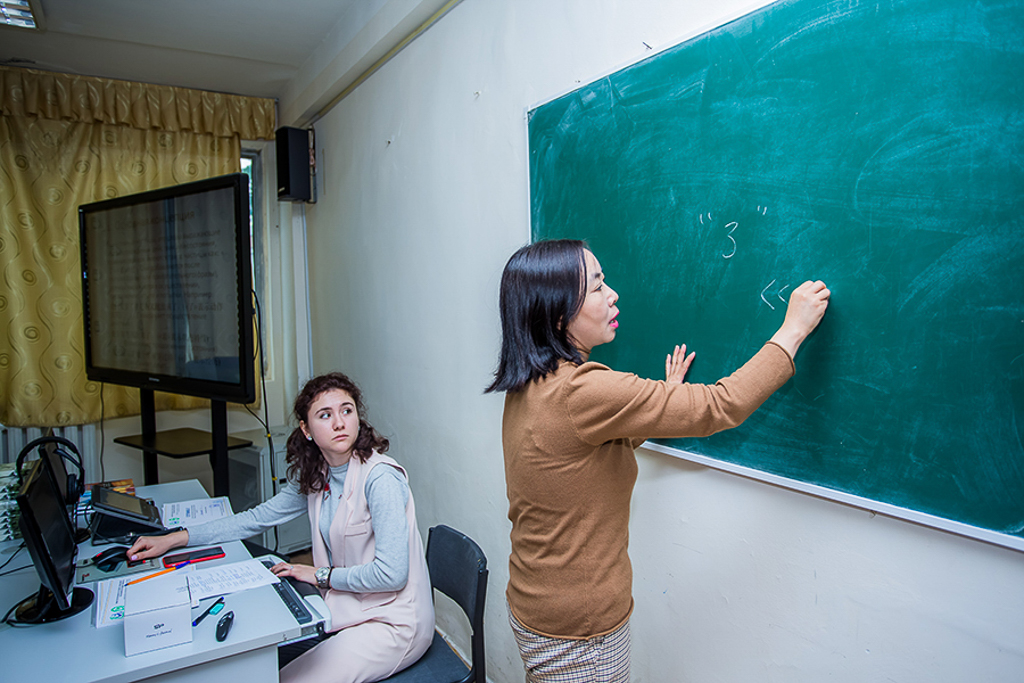 Though no official statistics are available on Uzbek students in China, third parties that facilitate visas estimates the number is around 5,000, with about 30 percent on scholarships or grants offered by Chinese universities.

Prospective students often learn about opportunities through YouTube, where social influencers – sometimes paid by their schools – reach out to compatriots at home. (Though many social networks like YouTube are blocked in China, VPNs are widely used.)

Honhodjayev at the Alibaba Business School has posted Uzbek-language videos about everything from finding Muslim-friendly food in China to the nitty-gritty of e-commerce, offering Uzbeks an in-depth look at his life there.

Another Uzbek vlogger, Nodirbek Erkinov, has over 5,000 subscribers and regularly posts videos about his life as a student and English teacher in Chengdu. When a commentator asked why, with his knowledge of English, he didn’t choose Europe or America, his reasoning mirrored Honhodjayev’s.

Nasiba Ayubkhanova, an Uzbek vlogger studying in Jiangsu, explained that the Chinese government is generous with grants for foreign students.

“There are partial, full, or mixed grants, that [...] cover rent, tuition or offer stipends,” she said in one video while she shows scenes from her life as a student.

Ayubkhanova first arrived on a grant as a certified English speaker. She and Erkimov both insist that previous knowledge of English or Chinese is essential before traveling to China.

“You have to know these languages and hold certificates that attest to it,” she advised her followers, describing which tests Chinese universities demand and the scores required to receive financial aid.

A price to pay

Traveling abroad for an education is nothing new for Uzbeks, said Timur Kocaoglu, an Uzbek-American professor of international relations at Michigan State University. Kocaoglu likens today’s students to the early 20th century reformist Jadids, who emphasized education as a way to modernize the Muslim world.

But Kocaoglu is wary, fearing that Beijing may expect ideological “alignment” in return.

“China’s big attraction is that it’s very rich, so it’s able to give scholarships and grants,” he said. “But like the long-term loans that China gives to Central Asian countries, these aren’t all gifts. They have to be repaid somehow.”

**Correction: This story originally misstated the university that Asilbek Honhodjayev attended in Tashkent.