For many Azerbaijani voters, the only choice is to laugh

Even his opponents have campaigned for President Ilham Aliyev. 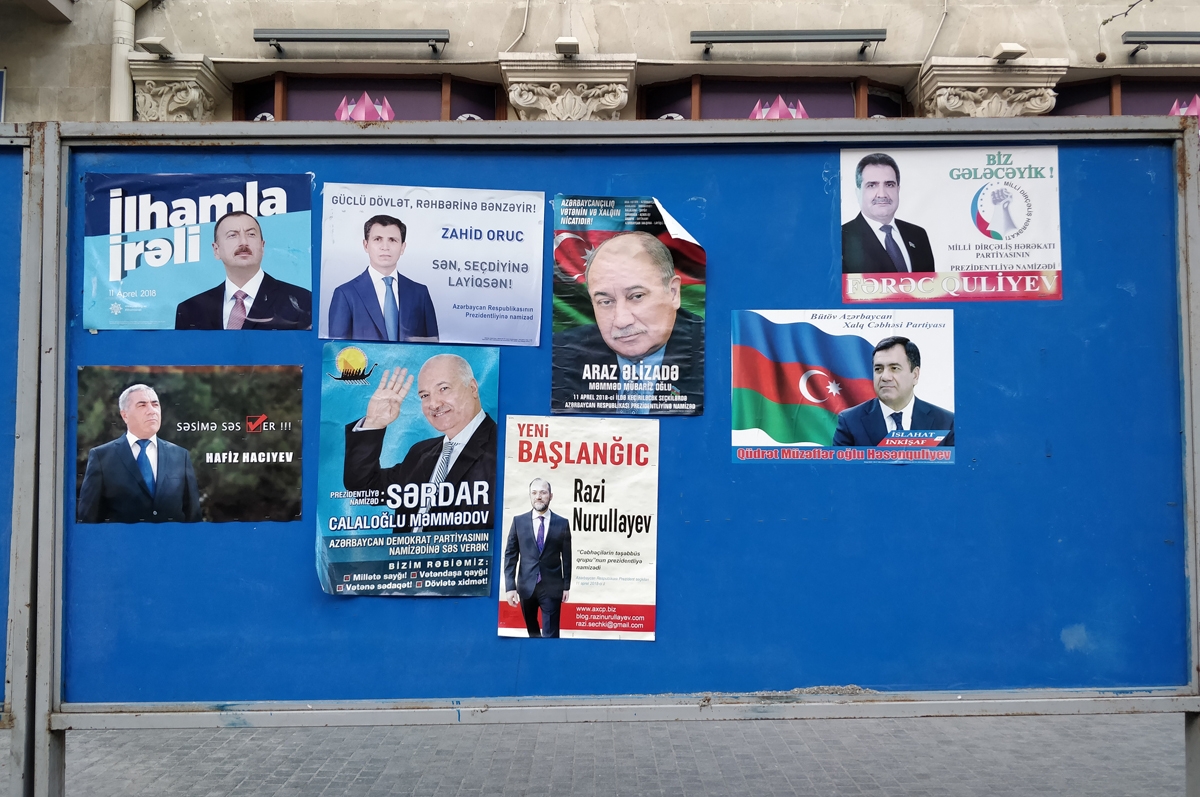 Azerbaijani voters go to the polls on April 11 for a presidential election. The outcome of the vote is already known: President Ilham Aliyev will be reelected.

But seven other candidates also are on the ballot, and even if they don't offer Azerbaijanis a viable choice, they are at least providing a source of humor.

“This election shows that the government is mocking its citizens,” Bakhtiyar Hajiyev told Eurasianet. “So those of us who protest are going to mock it as well.”

That was actually a small decline compared to the previous election, in 2008, when Aliyev won 89 percent of the vote. Political analyst Shahin Rzayev, in an essay for the website JAM News, forecasted a record performance in this year's vote. “My prognosis is that this year he’ll finally break the 90 [percent] threshold because the presidency has become a question of prestige rather than of credibility,” Rzayev wrote.

Whatever the margin, the 56-year-old Aliyev appears a shoo-in to win a fourth term in the office he's held since 2003, when he took over from his father, Heydar Aliyev.

Aliyev – who called the snap election in February – is not campaigning himself. He does have a slogan, “Forward with Ilham,” but a deputy prime minister, Ali Ahmadov, has been deputized to campaign for Aliyev, including at debates on public television.

But Ahmadov hasn't been the only one at the debates stumping for Aliyev. Hafiz Hajiyev spent nearly six minutes of a debate praising Aliyev, according to an analysis by the opposition monitoring group Election Monitoring and Democracy Studies.

Another ostensibly opposition candidate, Araz Alizadeh, focused his debate appearances on attacking the country's embattled opposition. “Disabled people get pensions of 55, 70, 110 manats” (or about $32 to $64 per month), he said at one debate in March. “And let's look at these people who call themselves the opposition. They take millions out of the bank. Do they spend a manat on these people with disabilities? No, they just spend their money for their pleasure. [...] The opposition is to blame for the condition that Azerbaijan is in.”

Zahid Oruj – like Alizadeh, a member of parliament – directly asked his supporters to vote for Aliyev. “He would be elected even if there were thousands of candidates,” he told BBC's Azerbaijani service in an interview. “Because Azerbaijanis, even those who are suffering, sympathize with Ilham Aliyev. He saved this state from enormous dangers.” Oruj's campaign slogan is “You Deserve Who You Elect!”

“None of the seven other candidates are really competing against Aliyev,” Bakhtiyar Hajiyev, the activist, said. “It was the first debate that I've seen where all the candidates were advocating for the status quo and talking about their opponent’s future projects instead of talking about their platforms. Is that competition?”

Other candidates have distinguished themselves with exotic platforms. Sardar Jalaloglu has proposed Azerbaijan join Turkey in a confederation. “Our friends will be same, our enemies will be same,” he explained at one debate. He also has proposed that Azerbaijan legalize “temporary marriages,” a Shiite practice giving a religious blessing to premarital sex.

The debates focused heavily on Azerbaijan's conflict with Armenia over Nagorno-Karabakh. One candidate, Faraj Guliyev, advocated for Azerbaijan to either join NATO or to create “a new geopolitical axis of the Turkic republics under the leadership of Turkey.” Another, Razi Nurullayev, called for the country to buy nuclear weapons from Pakistan and for the Pakistani military to be deployed to Azerbaijan.

In spite of this apparent diversity of views, some politicians who genuinely oppose the government have been blocked from participating in the election. Potential candidate Ilgar Mammadov, the leader of the ReAL movement, is in prison on charges he and international rights groups believe are politically motivated.

Others have decided that conditions are too loaded against them and have called on supporters to boycott the election.

“These candidates are there to show the imitation of elections,” said Anar Mammadli, chairman of the Election and Democracy Monitoring Center, in an interview with Eurasianet. “They are also there to show that for the presidency, there is no alternative to Ilham Aliyev.”