For Tajikistan's Asylum Seekers, Poland is a Dead End

The wave of refugees began in the fall of 2015, when Tajikistan summarily banned the main opposition party. 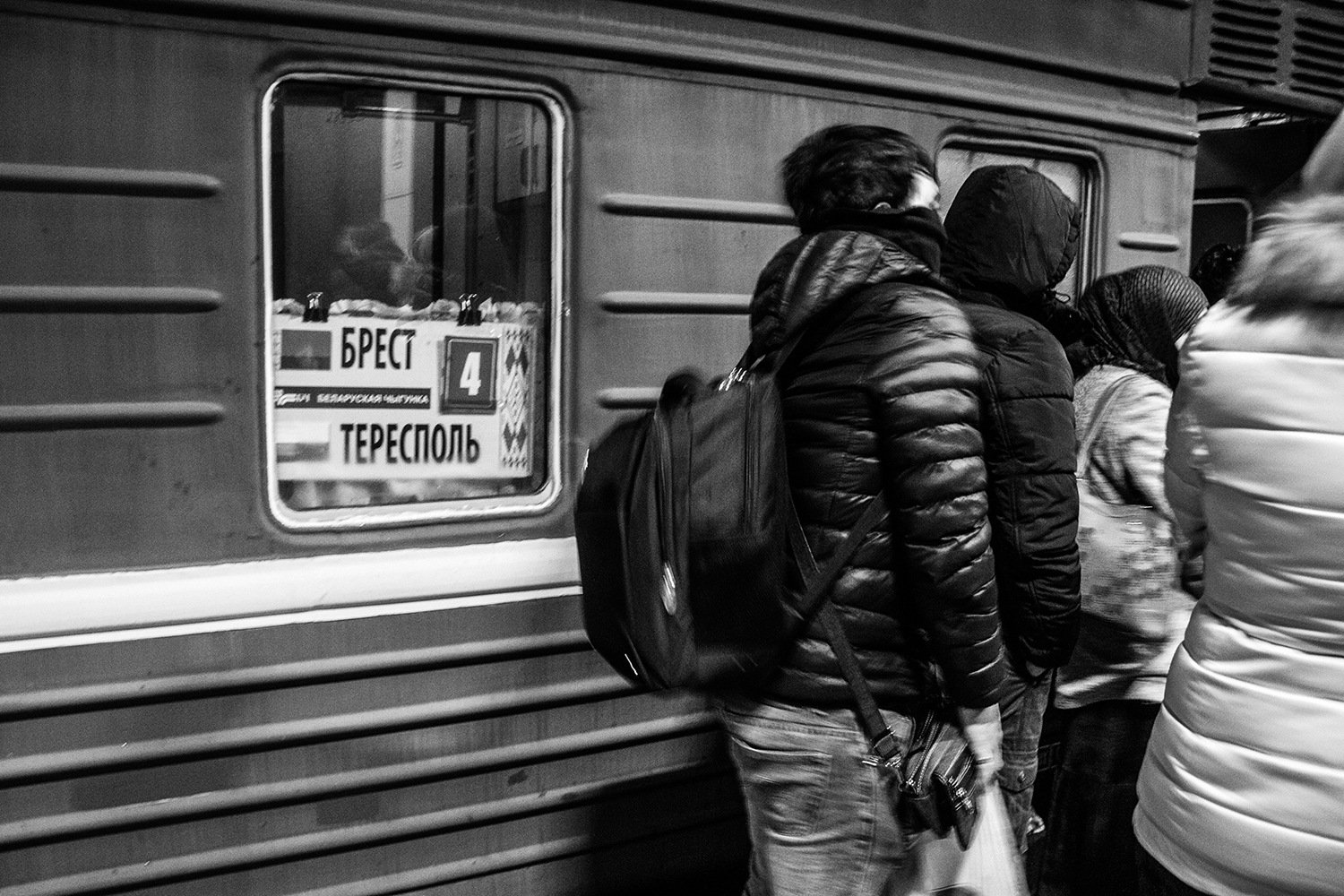 Passengers board a train in Brest, Belarus leaving for the Polish town of Terespol. (Photo: Agnieszka Pikulicka-Wilczewska)

Kalandar Sadurdinov, a 70-year-old from Tajikistan, is one of thousands wanted back home for his opposition activism. He spends much of his time these days getting treatment for an array of ailments, ranging from liver trouble to brain damage. His wife and six children wait for him at the refugee facility in Biała Podlaska, on the far eastern edge of Poland, where the whole family now lives.

And earlier this month, Polish authorities informed Sadurdinov, who is worn down by months of bureaucratic wrangling and has trouble speaking and can barely walk, that they have rejected his application for asylum.

Sadurdinov is among a growing number of Tajik political refugees to find Poland an unwelcoming haven.

He arrived in September 2017 through a border crossing near the Belarusian city of Brest. That crossing presents a natural approach point for Tajiks making their way across Russia and Belarus toward the relative safety of the European Union. Remaining in Russia, or even traveling to other once-secure locations like Turkey, leaves political figures open to murder and assaults at the hands of agents for the Tajik government. In some instances, governments in those countries have actively abetted Tajikistan in effecting extralegal extraditions – kidnapping, to all intents and purposes.

The wave of Tajik flight began in the fall of 2015, when Tajikistan summarily banned the Islamic Renaissance Party, or IRPT. The existence of the opposition group had long been warily tolerated, but President Emomali Rahmon’s regime brought that to an end with a spate of arrests and the decision to dub the IRPT a terrorist organization. No country in the West endorses that decision, which is almost universally accepted as being politically motivated.

In 2016, 882 Tajiks applied for asylum in Poland. With the exodus having attenuated, the number of applications is falling. Last year, only 154 Tajiks formally sought haven in the country.

The number of rejections, meanwhile, is rising. According to the Office for Foreigners, 153 Tajik citizens were denied asylum last year. That number was 109 in 2016.

Around 100 or so IRPT members have received asylum in Poland. Another 25 cases are pending review following initial rejections. Prolonged waiting generates anxiety. Fear of potential deportation to Tajikistan, where IRPT members face imprisonment and possible torture, compels many to try their luck in other EU nations like Germany, Austria and France, before they complete the asylum-seeking procedure in Poland. It isn’t just the specter of deportation that informs this strategy.

“In other countries, like Germany, France and Austria, there are more migrants, people are used to different cultures and asylum seekers can meet people from their countries,” Muhamadjon Kabirov, an IRPT member who has been granted refugee status in Poland, told Eurasianet. “For Muslims, there are lots of mosques. And the economy is much better, the standard of living is higher.”

The problem with this solution, however, is that it is illegal.

EU law requires people fleeing their home nation to apply for asylum in their first port of entry. Under the bloc’s Dublin Convention, people improperly found to have wandered across the continent’s unfettered borders will be sent back to the country in which they first arrived. The thinking behind the convention was to avoid what has contentiously been dubbed “asylum tourism” – which describes concerns that some people may be roving around Europe lodging multiple applications.

In 2017, there were 189 Tajiks who filed for asylum in Poland only then to leave for another country and fall prey to this rule.

One such person was Jamshed Yorov, a lawyer and human rights activist, who was prosecuted in 2016 in Tajikistan on suspicion of abetting an extremist organization. The charge stemmed from his willingness to provide legal representation to jailed IRPT leaders. He was only released after a swell of international campaigns. His brother Buzurgmehr, also a lawyer for the IRPT, has been handed a series of prison sentences, currently totaling 28 years.

Jamshed Yorov says that when he left Poland for Germany, in March last year, it was because he had been receiving threats from Tajik authorities, who managed to discover his whereabouts.

“I felt it was dangerous to stay in Poland, to work and write. I received threats and I was afraid to stay. That is why I left,” Yorov told Eurasianet.

Such concerns are not unfounded. At least one prominent Tajik opposition leader has been murdered while in exile – in Istanbul.

There are many factors tempting Tajiks into the legal peril of skipping Poland. Language barriers and lack of employment make long-term settlement unappealing.

Marta Szczepanik, a migration expert with the Helsinki Foundation for Human Rights, adds that another major issue is the Polish government’s anemic efforts to accommodate asylum seekers.

“The Polish government has frozen financing for the Asylum, Migration and Integration Fund,” Szczepanik told Eurasianet. “The first tranche of funding ended in mid-2015, but some projects were extended till 2016. As a result, many initiatives organized in refugee centers, such as classes for children, language courses, workshops for women and legal services have been discontinued.”

Populist rhetorical claims of huge numbers of foreign nationals seeking to enter Poland has also added a political dimension to the problem. Anti-Islamic sentiments have also been brewing for years. The most recent expression of that trend was seen in November, when around 60,000 people, many of them from elsewhere in Europe, gathered in Warsaw for a far-right march that included Islam among its targets.

The rate of positive asylum decisions in Poland is considerably lower than in the rest of the EU. Around 40 percent of all asylum applications in the EU were successful in 2017, according the Malta-based European Asylum Support Office. In Poland, the rate was just 19 percent.

Dark side of the Polish asylum system

When an asylum seeker arrives at the border, with travel documents in hand, officers at the crossing should under international law grant them access. Polish border guards have repeatedly flouted such requirements.

In 2017, 34 complaints over perceived unjust decisions by the Polish border service were filed with the courts. Most of these appeals were organized by a group of lawyers who traveled to the Polish-Belarusian crossing in March that year to provide support to a group of 26 asylum seekers who were being denied entry to Poland. In 11 of the 34 cases, courts found in favor of the complainants.

On some occasions, the real trouble starts after asylum seekers enter Poland. The European Court of Human Rights is currently considering the case of one Tajik woman who was together with her family placed in a guarded detention center in the town of Przemyśl, across the border from Ukraine. The woman says Polish officials disregarded the bundle of documentation that she insists proves she had been previously subjected to torture. The law states that victims of violence may not be placed in guarded detention centers.

After ten months in detention, the woman, who has not been named, attempted suicide. It was only then that a Przemyśl district court ruled that the family should be transferred to an open refugee reception facility.

This case has consequential implications. If the European Court of Human Rights finds in the woman’s favor, some victims of violence may seek to use the precedent to argue in court that they should not be liable for deportation to Poland.

“The decision about leaving is often a survival strategy – an attempt to do something – when a person feels staying in Poland may not be possible,” Szczepanik said.

Correction: The spelling of Kalandar Sadurdinov's name has been amended.