Tbilisi’s Russian expat community disputes Moscow’s narrative of a surge of Russophobia in the country, but some say that the ongoing tensions have put them in a complicated place. 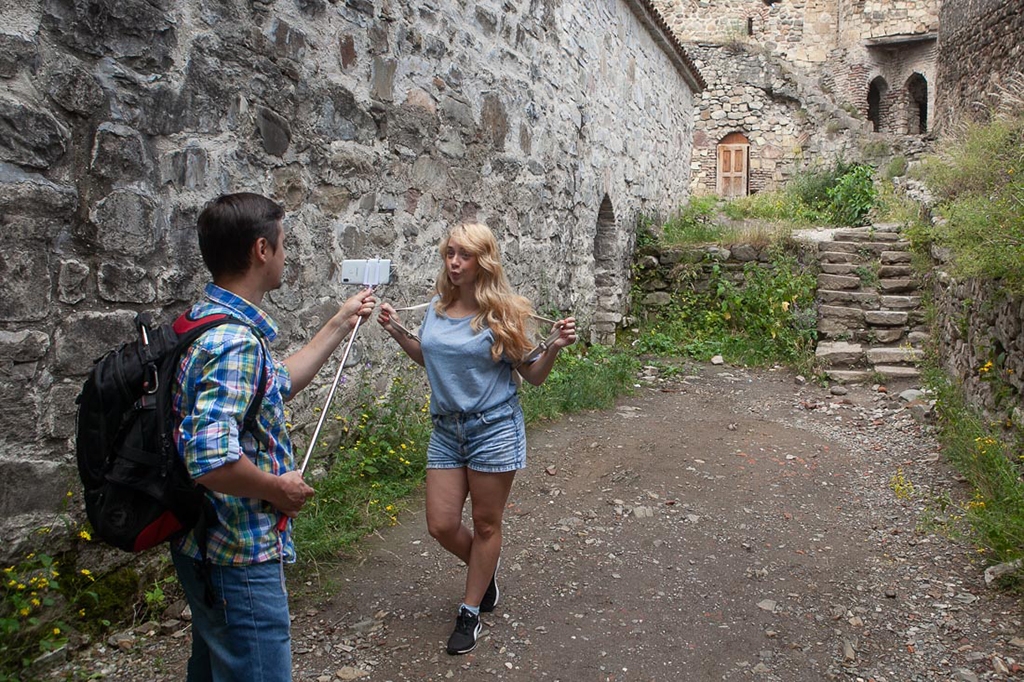 While thousands of Georgians were protesting Russia’s occupation of their country in front of the parliament building in Tbilisi, a slice of the city’s Russian community gathered June 28 in a shared workspace a few blocks away. The topic of discussion: how the ongoing political crisis might affect their lives.

They spoke of the absurdity of Kremlin’s narrative about Russians facing an outpouring of hate in Georgia – a claim amplified by state-run news in Russia – in the wake of a scandal over Russian lawmakers’ appearance in Georgia’s parliament. Still, there were concerns: how bad will Moscow’s ban on flights and the spike in tensions be for Russian-run businesses in Georgia? Will Russian expats and visitors increasingly be drawn into uncomfortable conversations about Georgia-Russia disputes?

Matters got quite personal for many, as they were forced to defend the country they had come to love from their own kin back home. Over the last few days, Anna Trofimenko had had so many Facebook exchanges with her friends and relatives back in Russia that she had to hit the unfriend button several times. “They said that I take the Georgian position and ignore Russian interests,” the 31-year-old Muscovite told Eurasianet.

A freelance web designer, Trofimenko knew the history of troubled relations between her first and second homelands more than most people in the room. By a quirk of fate, her father and husband are both Georgians. “Marrying Georgians is a family tradition for us,” she joked. But that also means that any escalations between Moscow and Tbilisi hit close to home. “During the 2008 war, my dad and mom would have fights in our house in Moscow,” she said, referring to the war over breakaway South Ossetia.

This time, Trofimenko was particularly adamant about convincing skeptics back in Moscow that nobody in Georgia is chasing Russians with “torches and pitchforks,” as she said Russian news and politicians were making it seem, and that Georgians had good reasons to not want Russian lawmakers in their parliament.

Georgians were outraged to see Sergey Gavrilov, a member of Russia’s Communist Party and a member of the Russian parliament, get comfortable in the chair of the speaker of the Georgian parliament at the same time as Russian troops are preventing hundreds of thousands of Georgians from returning to their homes in the breakaway Abkhazia and South Ossetia regions.

The Kremlin has described the ensuing protests as “Russophobic hysteria” and blamed them on the most reliable source of Russia’s troubles – the United States. “We fear that our American colleagues are doing everything to preclude rapprochement between Russia and Georgia,” Russian Foreign Minister Sergey Lavrov said.

Russian President Vladimir Putin instructed his citizens to stay clear of Georgia, a call that many interpreted as good reason to do the opposite. Victor Shenderovich, a prominent commentator and writer known for his sharp wit, called on fellow Russians to visit Georgia to spite Putin’s “degenerative hatred toward free Georgia.”

In online message boards, some Russians cited a famous moment in the Soviet movie Office Romance, when a fashionable secretary at a drab research institute-slash-passion pit is looking at a pair of new boots and can’t decide if she should buy them. Her buttoned-up boss advises her against getting the footwear, deeming it too flashy. “It means that these are good boots, I should take them,” the secretary says to herself, in what has become a popular trope to describe the wisdom of flouting official orders.

Still, as Russians living in Georgia got concerned calls from their families, some did get uneasy at first. “I went to the protests on the first day and when I saw all the anti-Russia posters, I was afraid to speak Russian,” said Alexandra Tyan, a 24-year-old Russian journalism student doing an internship in Georgia. She was also put off to see slogans like “F--- Russia,” she said.

“I don’t support Putin and I’m against occupation, but I’m also part of Russia,” she told Eurasianet. “I was walking down the street and I was thinking, ‘Guys, we’re in this together,’ there is no need to blame all of Russia for this.”

But she said she calmed down and went back to speaking Russian in public the following day, realizing that there was no hostility toward ordinary Russians in the streets of Tbilisi. Leaders of the demonstrations also have tried to make it clear that their problem lay with Russian politics, not the Russian people, and on occasion have even addressed the crowd in Russian.

On the second day of demonstrations, June 21, Russian journalist Aleksey Romanov went into the thicket of protests in Tbilisi with a camera with the aim of debunking Moscow’s narrative about anti-Russian riots raging in Georgia. “Nothing near the horrors that Russian television has been broadcasting about for 24 hours and counting is happening here,” he said in one of his YouTube dispatches. “I’m walking around with my perfectly Russian physiognomy, asking questions in Russian and I do not encounter a shred of anything even remotely reminiscent of hostility.” 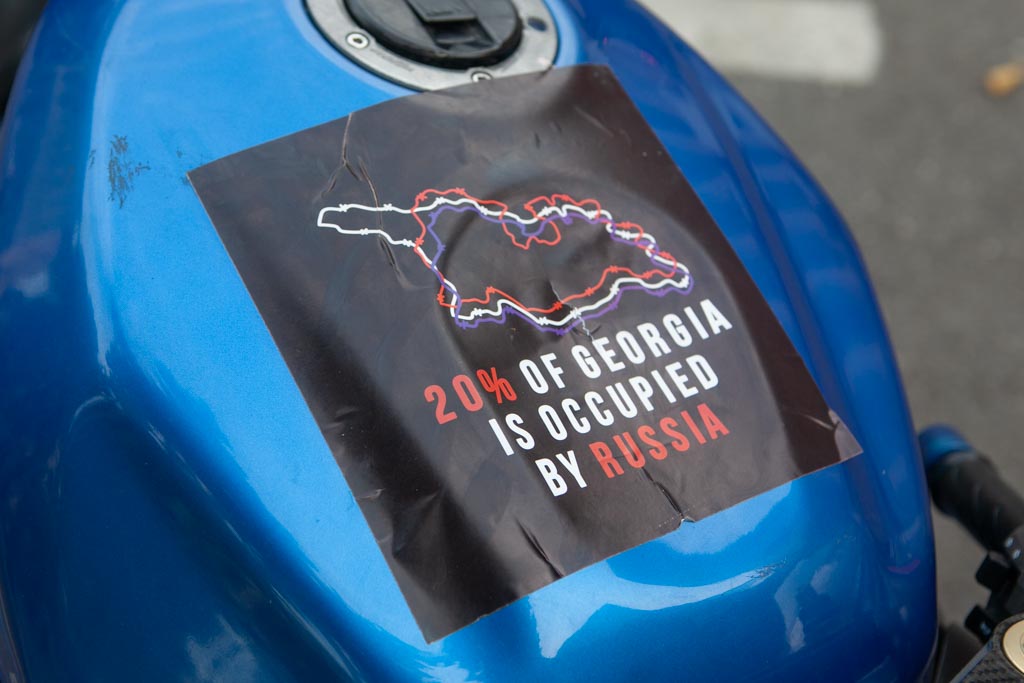 To be sure, the protests did bring to the fore some muted Georgian grievances against Russians. Even before the demonstrations began, many Georgians had tried to deliver a rebuke to the rapidly growing number of Russian tourists. Stickers saying “Russia is an occupier” and “20 percent of Georgia is occupied by Russia” began to appear everywhere from metro stations to wine labels.

Some Russians at the gathering on July 28 objected to the shaming of all Russians for Moscow’s policies. One woman recalled having an argument about Georgia-Russia relations with her Tinder match in Tbilisi, though most Russian expats said that personal exchanges on politics were extremely rare in Georgia.

“I saw graffiti saying ‘Russia is an occupier’ and many of my Georgian friends put that message as their profile pictures” on Facebook, said Julia Kozlovskaya, a 26-year-old online marketer from St. Petersburg. “I know perfectly well that this is not directed against me personally and I’m often ashamed of things that the Russian government does, but I also know plenty of Russians who come here and they don’t know a thing about the situation in Georgia – perhaps they’ve vaguely heard something in the news – and I don’t think it is fair to hold them responsible for Russian politics and for what they didn’t know about.”

Trofimenko said she also believes that many Russian tourists have no way of knowing about sentiments in Georgia. “All they hear from tour agents are stories of Georgian hospitality, the mountains and the wine, and all of this is absolutely true, but they are not getting the full picture,” she said. “They should also be told about the Russian occupation. Of all the information they get, at least 20 percent should be about that.”