The country’s Constitutional Court will rule in August whether, under the constitution, the charges under which Kocharyan is being prosecuted are valid. 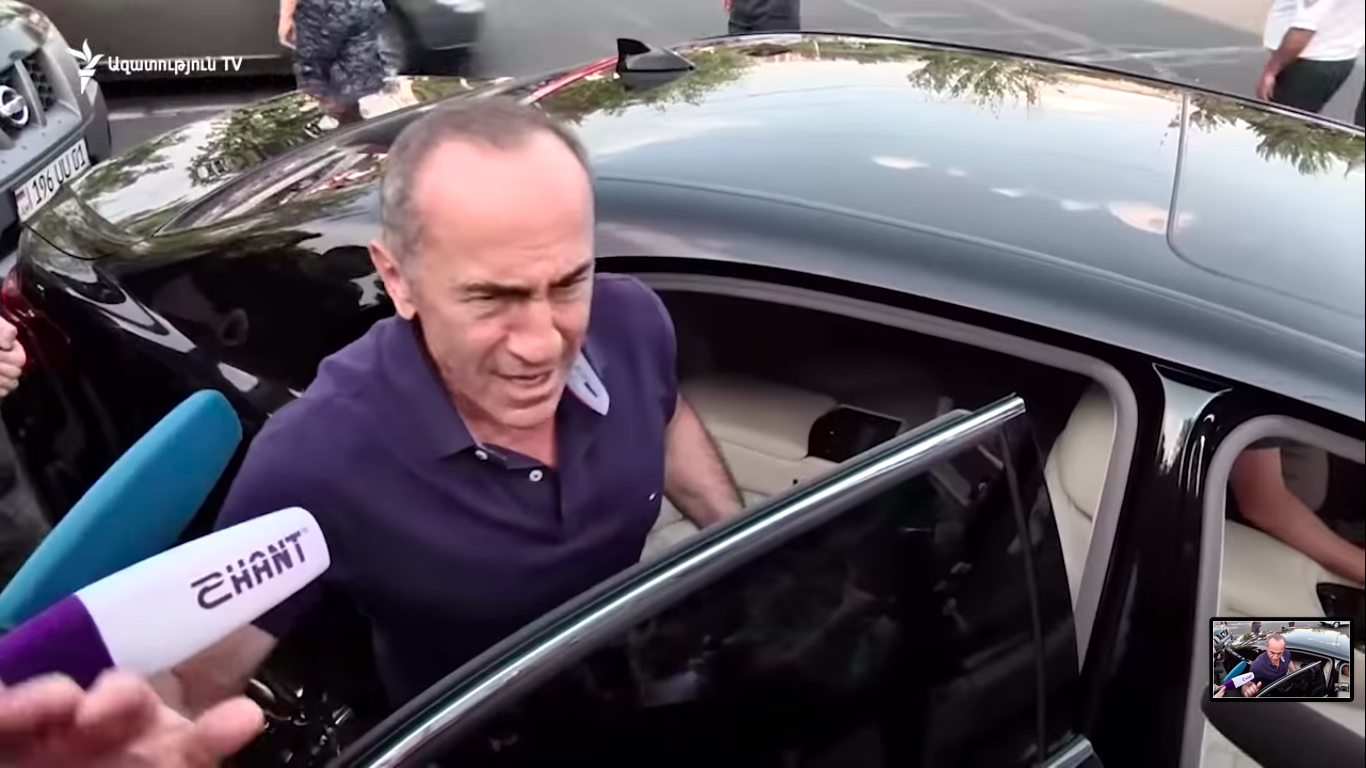 Screenshot of former president of Armenia Robert Kocharyan on his way to penitentiary after a judge ruled on June 25 that he would have to await his trial in jail.

An Armenian court has ordered Robert Kocharyan to be re-arrested ahead of his trial on charges related to the violent breakup of protests in 2008, when he was president. Kocharyan had been released on bail seven weeks earlier, a move that led Prime Minister Nikol Pashinyan – Kocharyan’s longtime nemesis – to launch an attack on the country’s judicial system.

The Court of Appeals ruled on June 25 in favor of the prosecutors’ demand that Kocharyan continue to be held in jail while he awaits trial on charges of “overthrowing the constitutional order” for his role in what have become known as the “March 1 events” in Armenia. He first faced the charges last July, but has been released twice since then.

After the hearing, Kocharyan was driven to penitentiary in a black sedan, and stopped briefly at the gate to get out of the car and wave at a jeering crowd. One journalist asked him if he had anything to say. “Oh, I have so many things to say,” he replied, but did not elaborate.

The day before the verdict Kocharyan gave an interview to “5th Channel,” a television station belonging to his friend, Armen Tavadyan. The wide-ranging interview covered his trial, his self-described successes as president, and Nagorno-Karabakh, where he was de facto president before taking on that role in Armenia.

He described the ongoing trial as a political vendetta against him. “They have concluded that I have somehow been endangering their political success today,” he said. He complained that the trial has been biased against him, that the judge had not allowed his lawyers to speak but has given a prominent platform to the families of the victims. Ten people died during the crackdown – eight protesters and two police officers.

As he has repeatedly done, he blamed the March 1 violence on Pashinyan, who was an opposition politician at the time and helped organized the protests. “Today’s prime minister is directly responsible for the March 1, 2008, mass disorders and of course he is trying to rewrite history.”

Before the case goes to trial, Armenia’s Constitutional Court has to rule on the legality of the charges. On June 21, the court issued a statement saying it was considering a request from Kocharyan’s legal team to rule on whether, under the constitution, the charges under which Kocharyan is being prosecuted are valid. That hearing was set for August 29.

Adding a wrinkle to those proceedings will be the fact that the Constitutional Court now appears to be headed – for now – by a former lawyer for the March 1 victims’ families.

Vahe Grigoryan, who made a name representing the March 1 victims in the European Court of Human Rights, was confirmed to be the newest member of the Constitutional Court on June 18. Two days later, during his inauguration at parliament, he announced that he would be the chairman of the court, trying to exploit a semantic difference between the current constitution, adopted in 2017, in which those who sit on the court are “judges,” and the former one, in which they are “members.” The constitution says “judges” can determine the chair, and Grigoryan – only one of two to be put on the court since the new constitution was adopted – said that means he calls the shots.

Members of the ruling My Step alliance applauded Grigoryan’s announcement. But it was received dimly by many legal experts. “I even find it pointless to comment on such a statement. It doesn’t fit into any logic and is absurd,” said one constitutional law expert, who told the news website panorama.am that the self-election was “absurd, anti-constitutional and unlawful.”

Vazgen Manuyan, president of the Public Council of Armenia, a government body that aims to bring together civil society and the government, agreed. “This is the first time I am hearing a person declare himself president of the Constitutional Court. I am concerned about the fact that there are such people in our society,” he told the news site ankakh.com.

It remained unclear whether Grigoryan’s gambit would succeed, and other members/judges of the court have yet to weigh in.

Hovhannes Khudoyan, one of Kocharyan’s attorneys, told RFE/RL that the verdict will be appealed in the Court of Cassation.