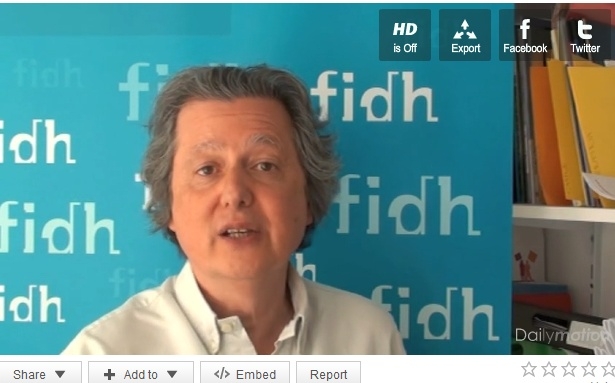 Lola Karimova-Tillyayeva is pursuing her libel lawsuit against the French website rue89.com.

A French court is expected to rule this week on whether to take up the case, said to hinge on whether it was libelous to call Karimova-Tillyayeva "the dictator's daughter."

Her case against one of the most irreverent Paris media outlets is slowly turning into a public relations fiasco for her and the oil-producing Central Asian republic, Uzbekistan, where her father, Islam Karimov, has reigned supreme for more than two decades.

The trial is scheduled this Thursday, May 19 in Paris. Augustin Scalbert, a rue89.com journalist, is charged with libel for an article he wrote a year ago, "AIDS: Uzbekistan Represses at Home but Parades in Cannes," on a gala fund-raising event involving Tilyayeva-Karimova. Scalbert is optimistic, says the Telegraph:

"It will be interesting to discuss in court whether Islam Karimov is dictator or not," he said. "If we're not condemned, it will set in French law that we can write that Uzbekistan is a dictatorship. If it goes the other way, we're going to make all possible appeals up until the European Court of Human Rights, and at every new moment the law suit will give again and again more coverage to the problems in Uzbekistan."

Scalbert's lawyer evidently plans to use the "truth defense" and show the court the ways in which the term "dictator" was apt.

Last week on the even of the May 13 anniversary of the Andijan massacre, Pierre Haski, rue89.com's editor, held a joint press conference with the International Federation for Human Rights (FIDH) featuring Uzbek activists Mutabar Tajibayeva and Nadejda Atayeva.

Analyst Joshua Foust has called Karimova-Tillyayeva's gambit "libel tourism" -- she is believed to have an easier time to launch this kind of lawsuit in France than in other countries. The president's daughter has been Uzbekistan's ambassador to UNESCO since in 2008, taking on projects like an i-phone app on Uzbekistan's cultural heritage.

UNESCO, based in Paris, often takes up defense of journalists harassed for their work, so it will be interesting to see how UNESCO itself responds to the case.

Marthoz notes that rue89.com, launched in 2007 by Haski, the former foreign editor of the Paris daily Libération, already has suffered a "cascade of lawsuits" for its reporting and is selling virtual bricks to raise money to pay for its lawsuits.