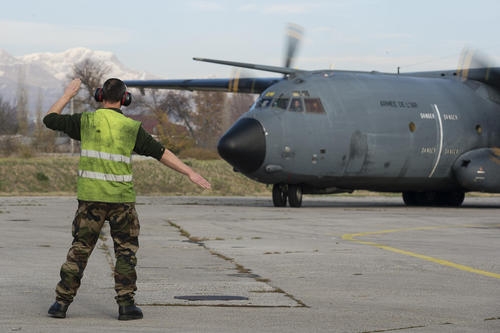 The small French air detachment in Dushanbe is leaving Tajikistan, as France carries out its withdrawal from Afghanistan. The Operational Transport Group started pulling out on April 15, and will complete its withdrawal from the airport by July. A small engineering unit working on the resurfacing of the airport's runway will remain until next year, according to a statement from the French Ministry of Defense.

The small base has operated since 2002. (And small means small: 50 meters by 250 meters, as EurasiaNet's David Trilling noted in a 2009 photo essay on the detachment.) It has hosted between 170 and 230 French soldiers who work on supply and logistics for their compatriots in Afghanistan, and occasionally French multirole fighter jets used for operations in Afghanistan.

The French departure from Tajikistan is, not surprisingly, the result of the French disengagement from Afghanistan, said Florent de Saint Victor, a French military blogger, in an email interview with The Bug Pit. "The closure is linked to the end of the last step for the French troops withdrawal from Afghanistan (there are still some French troops - less than 800 troops - for logistics and training mission with the Afghan National Army)," de Saint Victor said.

Recall that France recently signed an agreement with Kazakhstan to use Shymkent as a logistics center for shipping military goods out of Afghanistan. Like the U.S. and other coalition countries operating in Afghanistan, France wants to use the land route through Central Asia to withdraw its equipment from Afghanistan. That route has recently started operating, with the first shipments arriving in France last month, according to another French MoD announcement.

Interestingly, de Saint Victor notes that most of the French withdrawal has already taken place, so the northern route was set up a bit too late to be of much use:

The decision to open a transit center in Kazakhstan is to accelerate the withdrawal from Afghanistan with different exit roads (the same problematic exists for US troops). The opening of a multimodal road from the north of Afghanistan, using the aircraft to Shymkent and the railroad to Latvia, was still in negotiation at the end of 2012. The Kazakh authorities expected some French funds to improve a part of the airport.

But all these agreements (with Kazakhastan, and also with Uzbekistan) are too late (for France, but maybe useful for other coalition members). French vehicles and equipment will be mostly withdrawal by Antonov airplane to the United Arab Emirates and by boat to France. According to the latest news, 80% of the goods withdrawal (armoured vehicles, containers ...) has already been achieved.