It was mostly a C-list crowd who showed up for celebrations marking the tenth anniversary of Russia's recognition of the breakaway territory. 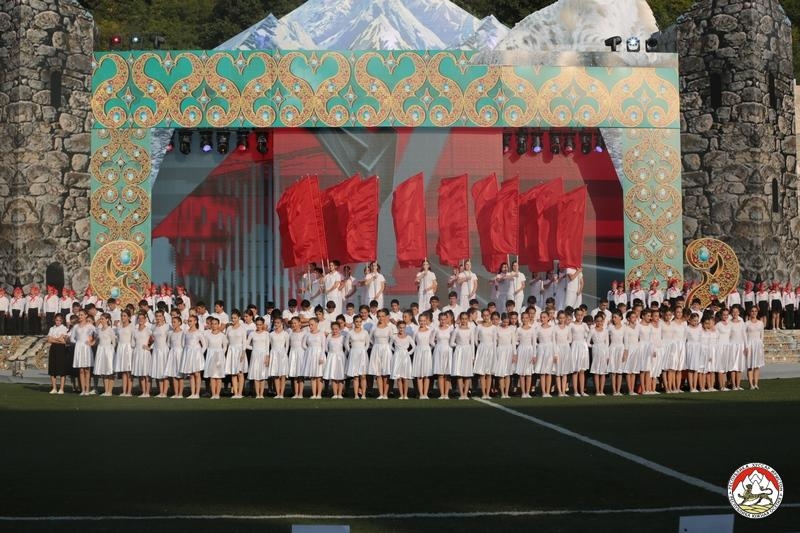 A scene from a celebration put on by South Ossetia to mark the tenth anniversary of Russia's recognition of the breakaway territory. (photo: presidentruo.org)

Not many world leaders recognize South Ossetia as its own nation. And fewer still managed to join the petite Caucasus enclave for its gala celebrations of that recognition.

The breakaway region had leaders like Syria’s Bashar al-Assad and Venezuela’s Nicholas Maduro down as maybes for the August 26 event. But not even Russia’s Vladimir Putin, the region’s main benefactor, showed up for grand celebrations of the 10th anniversary of recognition by Russia.

The absence of Russian leadership must have been disappointing, as the region went out of its way to celebrate its undying friendship with Russia. The de facto capital Tskhinvali was festooned with the Russian tricolor and a grand spectacle was held to show its appreciation to Russia and Putin, the champions and saviors of the embattled enclave. “Thousands of costumes were sewn for the performance,” wrote Russia TASS newswire in a glowing report from Tskhinvali.

The festivities, and the Russian coverage of it, harkened back to the Soviet era, when the empire’s many provinces would celebrate Moscow’s role as a leader, with praises sung to whomever the Kremlin’s chief tenant was at a time. As it was then, scores of children took part in the festive performance in South Ossetia.

The highlight of the event appeared to be what TASS described as a “tragic musical-poetic reconstruction of Georgian aggression.” One spectator told the news agency: “I was crying during the part where they showed the 2008 war, and I looked around and saw that the whole stadium was sobbing.”

De facto leader Anatoliy Bibilov told a crowd that he personally thanked Putin at a recent meeting for recognizing South Ossetia and for saving it from Georgia, “but the most beautiful words cannot express the gratitude toward Great Russia that will always be in our hearts.”

Tskhinvali did bag two heads of state, of a sort: The leaders of the twin eastern Ukrainian breakaway republics, the Donetsk and Luhansk People's Republics, both came, along with delegations from the other handful of entities that formally recognize it like Nicaragua, Venezuela, and Nauru. While Assad failed to show, he sent a personal representative, who said Damascus is looking into establishing an embassy in Tskhinvali after recognizing South Ossetia (and Abkhazia) earlier this year. (Bibilov did claim that Assad is still planning a visit to the territory, even if the Syrian leader missed the big bash.)

The celebrations were viewed with dismay from Tbilisi, which can do little other than appeal to international public opinion while they watch Russian troops gradually build a wall around South Ossetia, physically carving it out of Georgia.

For Georgians, the absence of Russian leaders at commemorations in Tskhinvali was seen as a testimony that Moscow cares little about the region and its independence, but rather uses it as a geopolitical bargaining chip. “The entire international community supports Georgia’s sovereignty and territorial integrity,” Georgia's Ministry of Foreign Affairs said in an August 26 statement. “Sooner or later, Russia will have to change its illegal decision of 2008 on recognition of the so-called independence of our regions and to de-occupy our territories.”