From arrest to the campaign trail: Kocharyan says he will participate in next elections

The former president has been on a media tour of sorts, but it's unclear whether he has much political support left in the country. 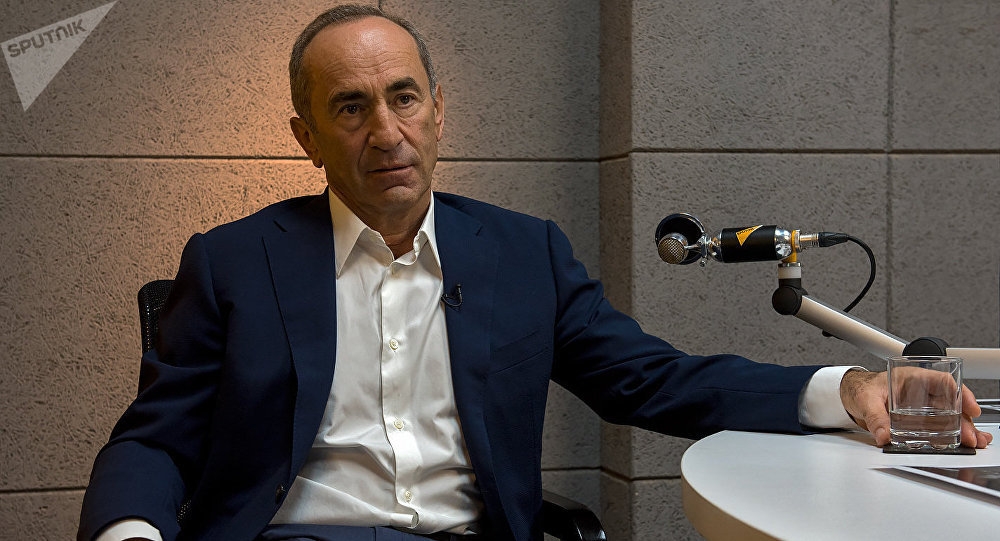 Former president of Armenia Robert Kocharyan, in a screenshot of an interview with Sputnik Armenia in which he said he plans to take part in upcoming elections.

Former Armenian president Robert Kocharyan, recently released from detention on charges he says are a political vendetta by Yerevan's new leaders, said he plans to take part in upcoming elections.

"If I have stated that I have returned to politics, then it is natural to assume that I'm going to take part in the elections,” Kocharyan said in an interview with Sputnik Armenia broadcast on August 31. “It's too early to talk about the format. There is still a lot of time and the situation is changing dynamically and it will continue to change."

Kocharyan has been out of Armenian politics for 10 years, living a low-profile life outside Armenia. But since his return he has been dropping hints about his return to public life. In an interview with Russian network NTV a few days earlier, he said that "I can be a focal point for those who see the current problems."

He is remaining coy about exactly how he'll participate, telling Sputnik that he is working now to identify his potential political base in Armenia. He appeared to be working on his stump speech, however.

“We need to understand what our people need,” he said. “Do we need populism, slogans, people who can give emotional speeches? Or do we need people who can create 30-40 thousand jobs a year, attract investments and provide stability and security?”

Kocharyan also took aim at the new authorities' handling of relations with Russia, Armenia's main strategic partner, which has taken a skeptical view of the new regime in Yerevan. "For example, I did not understand why Armenia should take part in the NATO summit at this level,” Kocharyan told Sputnik. “We should cooperate with NATO, there are no two opinions, but at this level, when the relations between NATO and Russia are at level zero? To participate in order to take selfies in the corridors of NATO and raise questions to our partners, I don't think is far-sighted."

The apparent return to politics is yet another dramatic turn in the Kocharyan saga. He returned to Armenia in July to be questioned in the government's investigation into the events of March 2008, when protests broke out against the legitimacy of an election that gave the presidency to Kocharyan's ally and successor, Serzh Sargsyan. Government security forces violently broke up the protests and eight protesters and two police officers were killed.

Newly elected Prime Minister Nikol Pashinyan was one of the organizers of the 2008 protests and has made prosecuting those responsible for the violence one of his key early priorities in office.

Shortly after being questioned as a witness in the case, Kocharyan was himself arrested. He was released on August 13, and a day later tried to give a press conference but it was broken up by protesters who stormed the venue. He has repeatedly described the investigation as a “vendetta.” In this latest interview, Kocharyan said, "There is no case, no justifications. It's legal garbage, not a criminal case."

Kocharyan also tied the investigation to relations with Russia. Yuri Khachaturov, who has also faced charges in the case from his role as the chief of the Yerevan military garrison at the time of the 2008 crackdown, is the general secretary of the Collective Security Treaty Organization, a Russia-led military bloc. "What was done to Khachaturov was short-sighted, it was a step that created serious concern within the organization. It is also possible that we will lose our place because of this criminal case,” he said, apparently referring to Armenia's right to hold the leadership post in the organization until 2020. “I do not think there are any prospects in the criminal case, but the damage is done," he said.

(The interview, incidentally, was aired on Kocharyan's birthday and Russian President Vladimir Putin called the ex-president to wish him a warm congratulations, the Kremlin announced.)

Kocharyan's participation would add another layer of drama to an election that already promised plenty. It's not yet clear when the country will hold parliamentary elections, but Pashinyan has said it will be by next May. Those elections will be key to consolidating Pashinyan's position, as he now operates with a parliament consisting mostly of his opponents.

The reaction to Kocharyan's political comeback attempt has been mixed. His relationship with Sargsyan has long cooled, but earlier in the week Eduard Sharmazanov, the deputy speaker of parliament and member of the formerly ruling Republican Party said that the party was open to cooperating with Kocharyan. “He has a moral, legal and political right to engage in politics," Sharmazanov told journalists on August 28. “I think he will return to politics, he already has. If you think that Robert Kocharyan is a dormant volcano, then you do not understand anything about politics.” The Armenian Revolutionary Federation also has floated the prospect of working with Kocharyan.

Pashinyan has himself belittled the prospect of Kocharyan’s return: "You are talking about scenarios that cannot exist,” he told journalists on August 22. “Why do you ask me? Go out on the streets and ask people. Though I don’t think what you will hear will be worth broadcasting.”

Meanwhile, the legal case against Kocharyan is continuing. At a Yerevan rally celebrating the 100th day of his leadership, Pashinyan vowed that the case is nearing completion. “In essence, we can say that the case of March 1 is fully disclosed, and I can state with utmost responsibility that no perpetrator will avoid responsibility, there is no such option,” he said.

But Sasun Khachatryan, the head of the Special Investigative Service, which is in charge of the probe, has been less committal. "I am hopeful that this case will be fully revealed, including those who committed murder,” he said on August 30.