From Central Asia to Moscow, Riding the Bribery Express 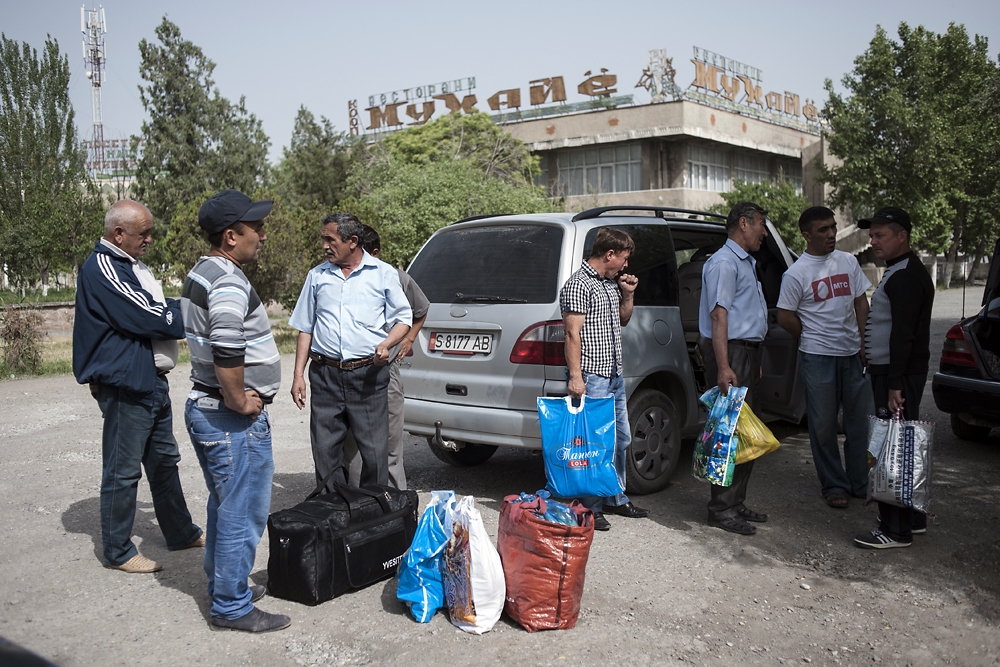 Migrant workers arrive in Khujand, Tajikistan, early in the morning for buses to take them to Russia for employment. 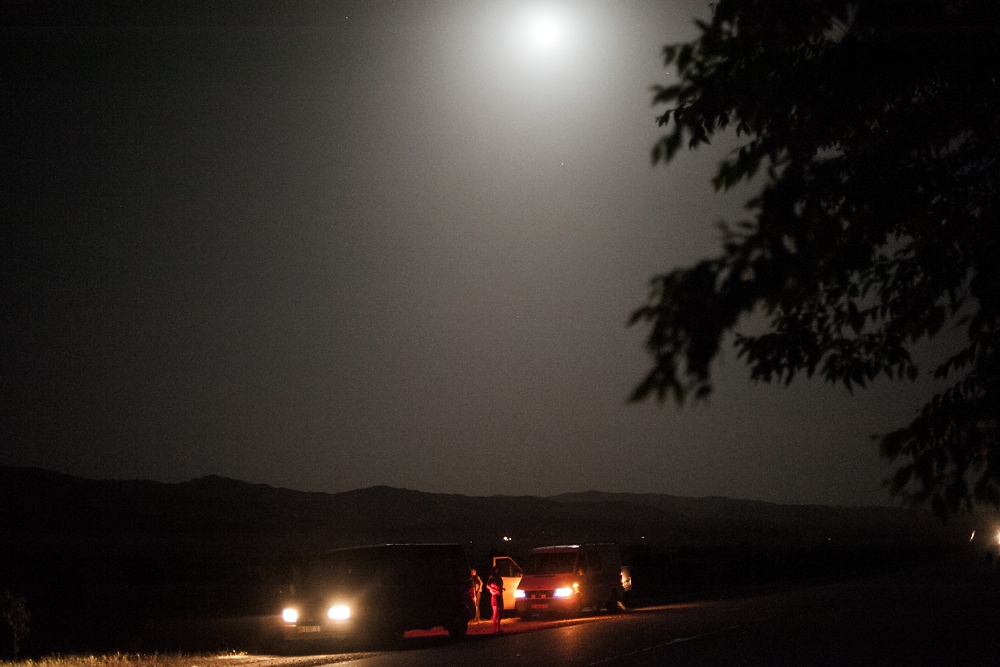 On the road from Khujand to Bishkek the minibuses stop every three hours for a break. 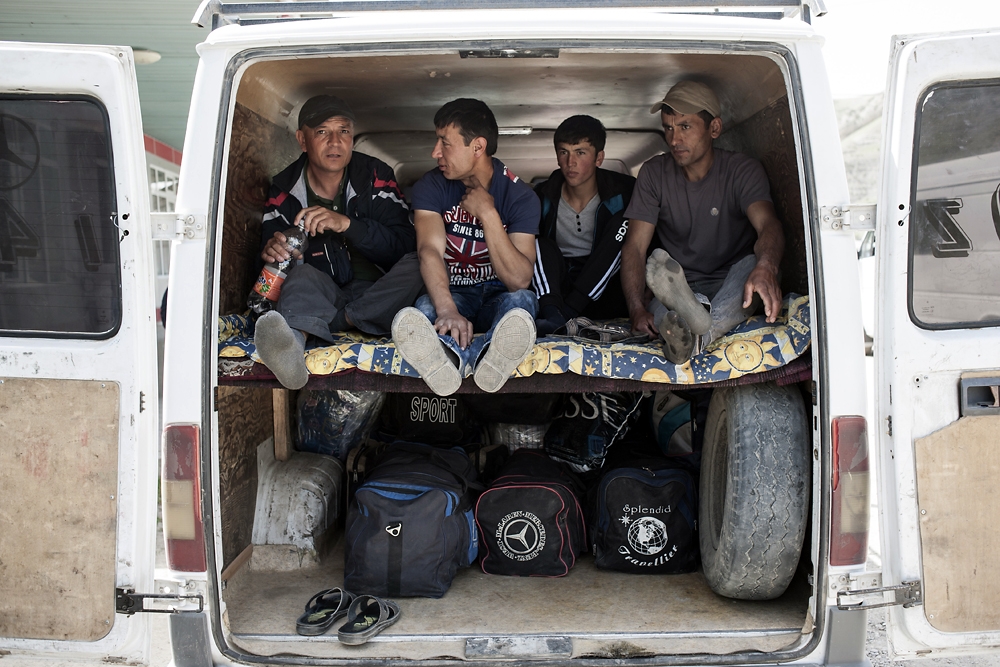 More migrants join in Isfana, Kyrgyzstan, climbing into vans that seat seven but have been rigged to fit 15, plus luggage. 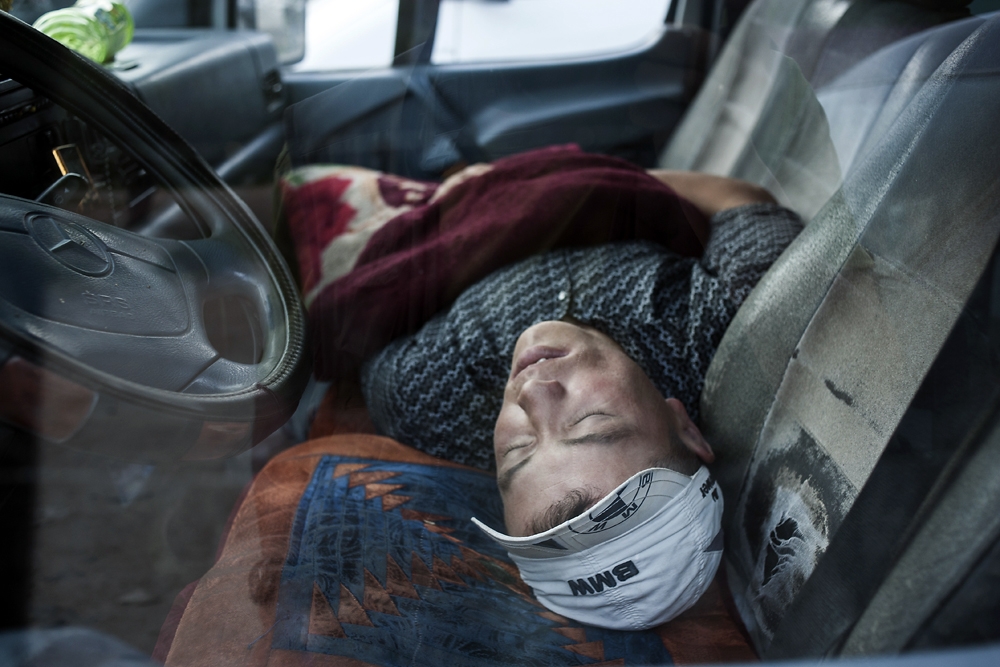 A passenger sleeps on the front seat during a six-hour stop before the difficult mountain-pass drive to Bishkek. 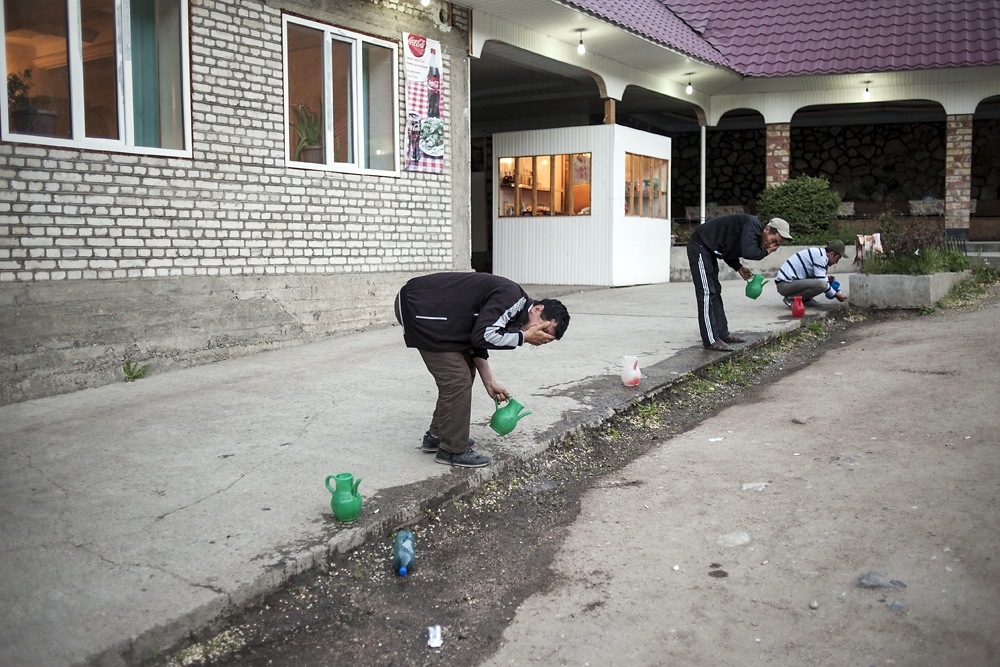 Passengers wash their faces at a rest stop in Kyrgyzstan. 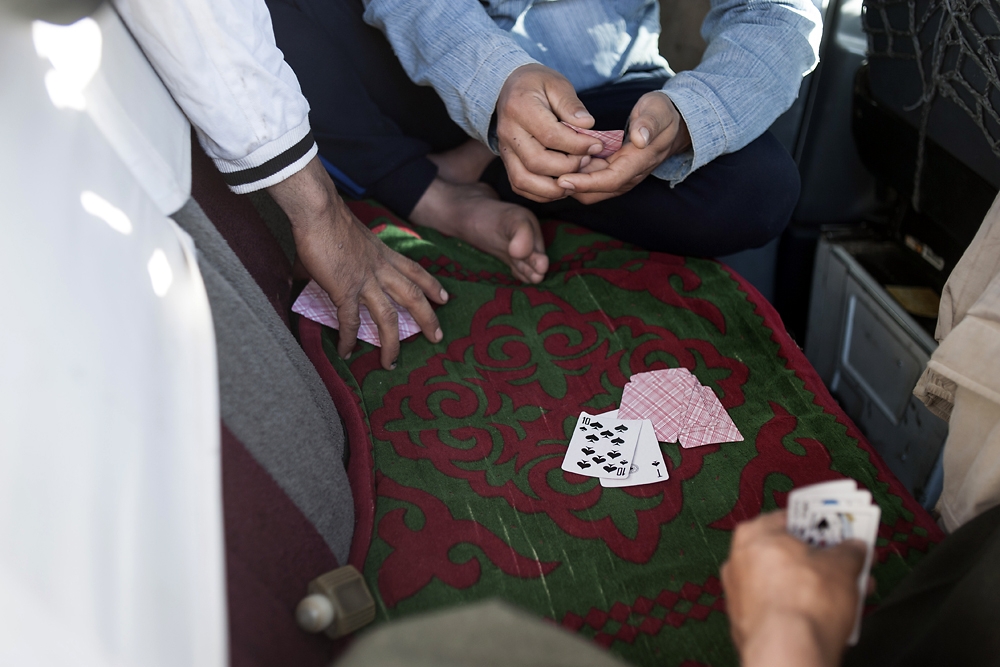 Passengers play cards during the many hours in the cramped vans. 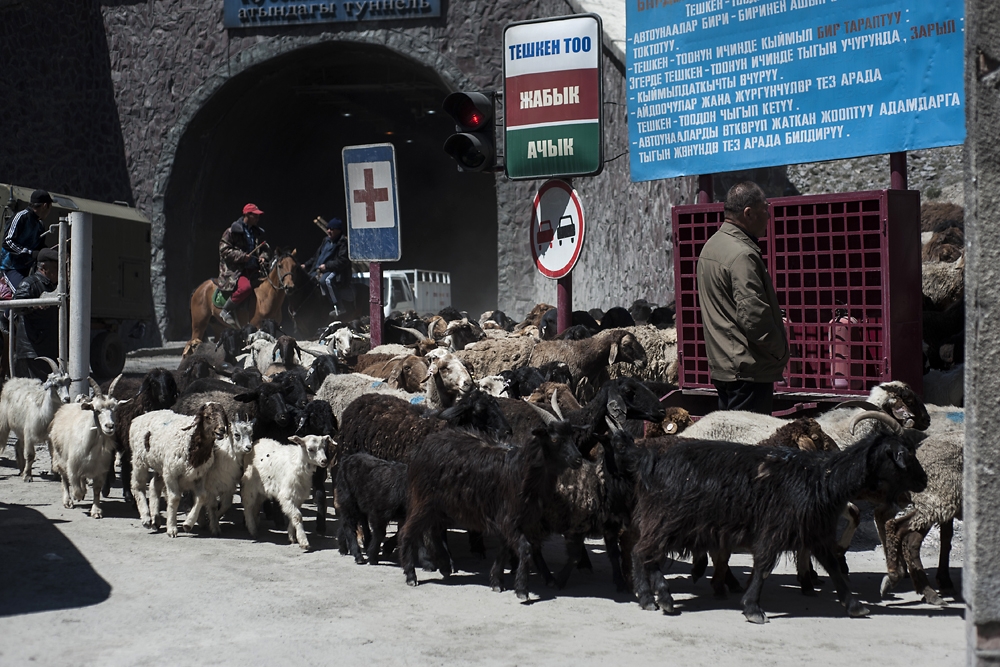 A mountain tunnel is shut down for an hour as shepherds move their flocks to summer pastures. 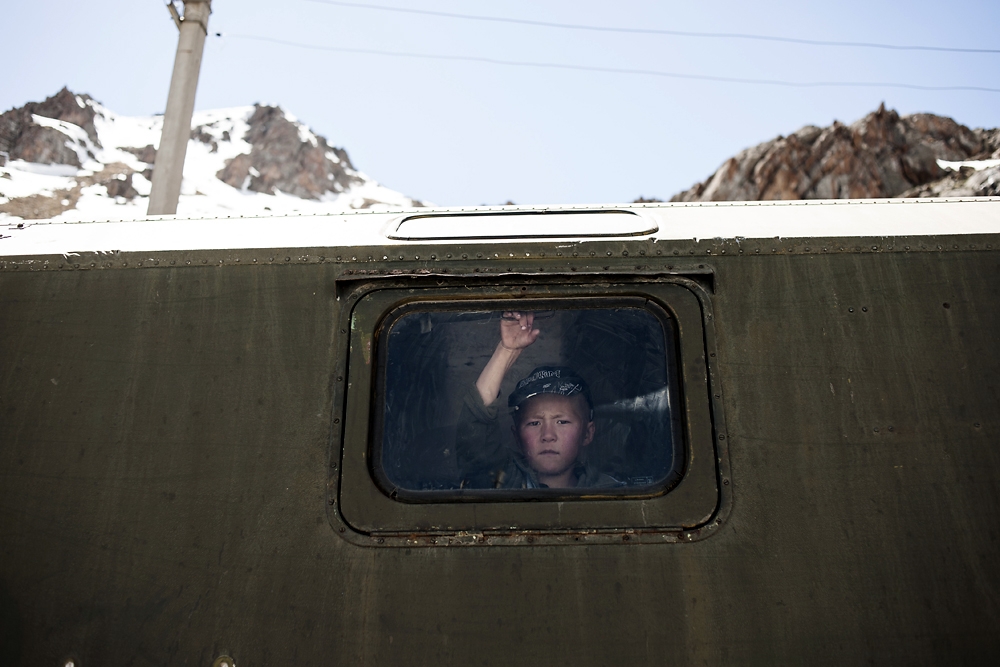 A Kyrgyz boy looks out his family's van window at the migrant workers on their way to Russia. 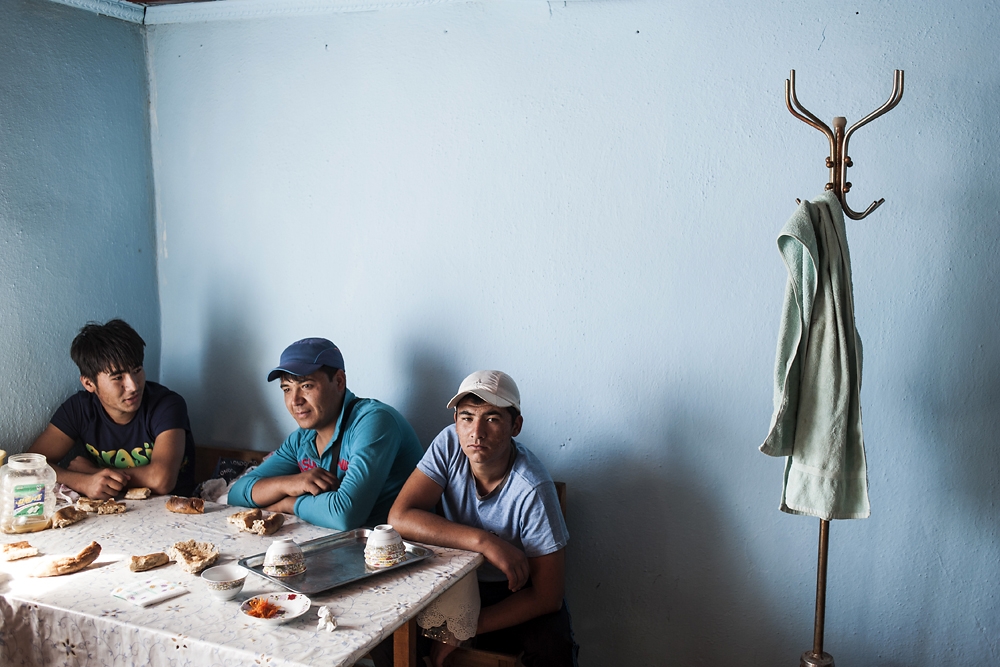 Now riding in a larger bus, passengers take a break at a roadside restaurant near Kokterek, Kazakhstan. 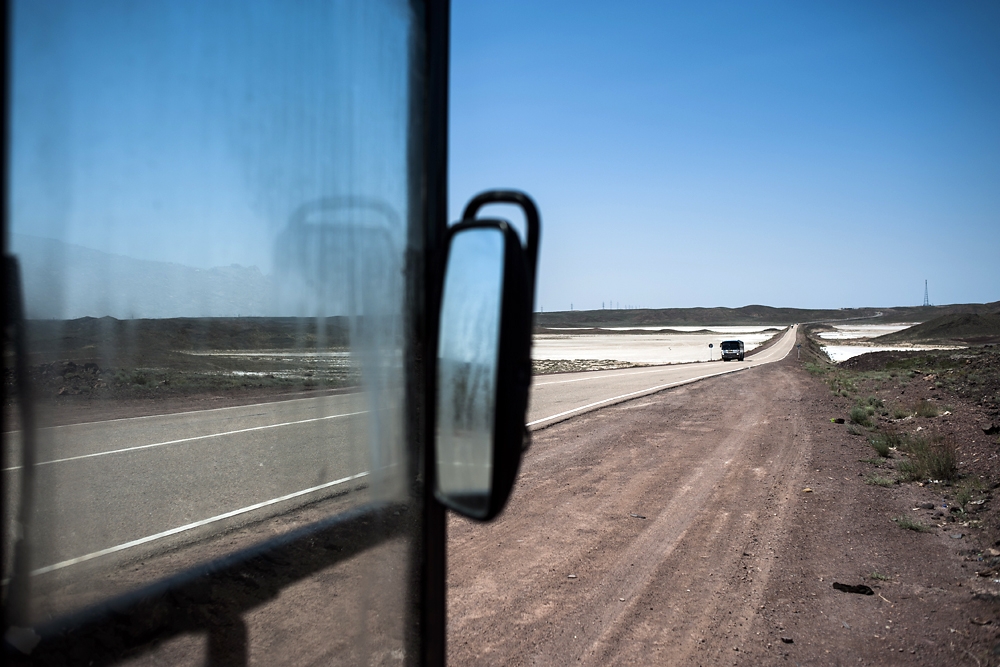 The stretch through Kazakhstan is one of the most corrupt, the bus driver says. 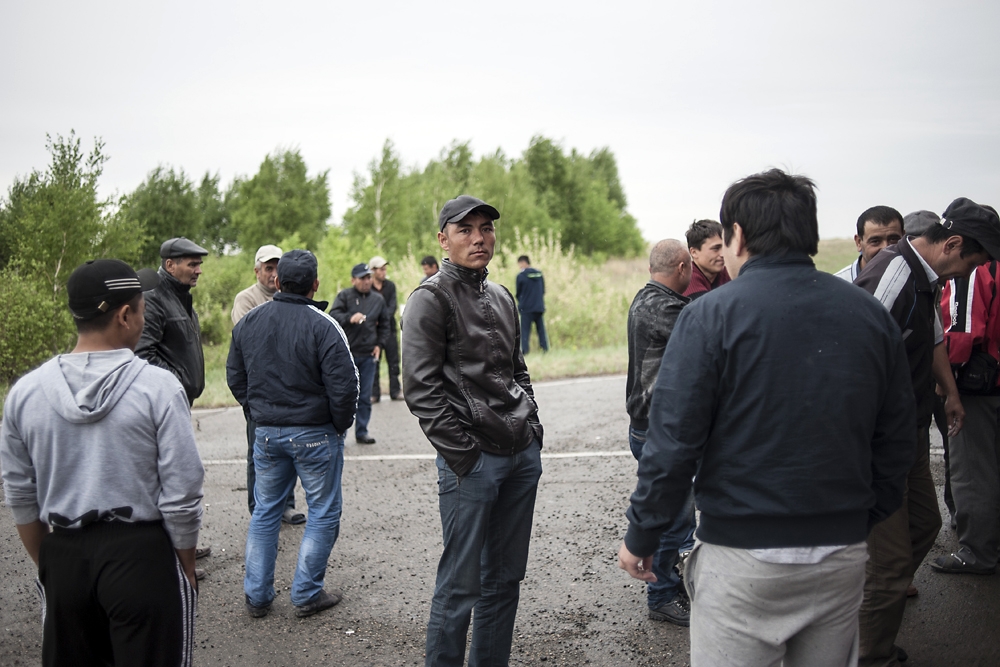 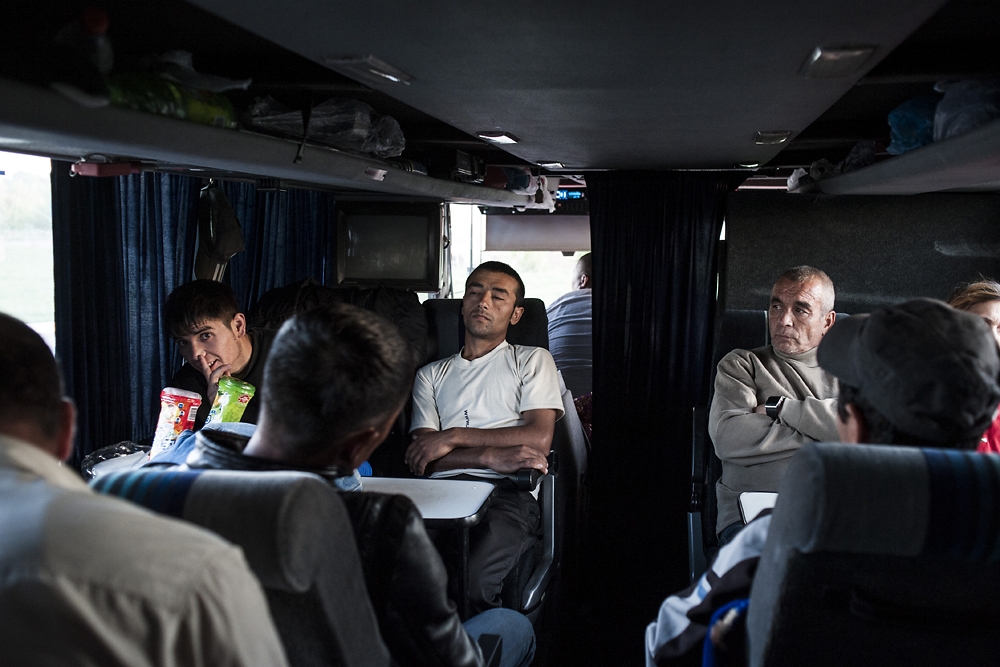 With a little more room in a larger bus, the migrant workers are able to stretch their legs for the rest of the journey. 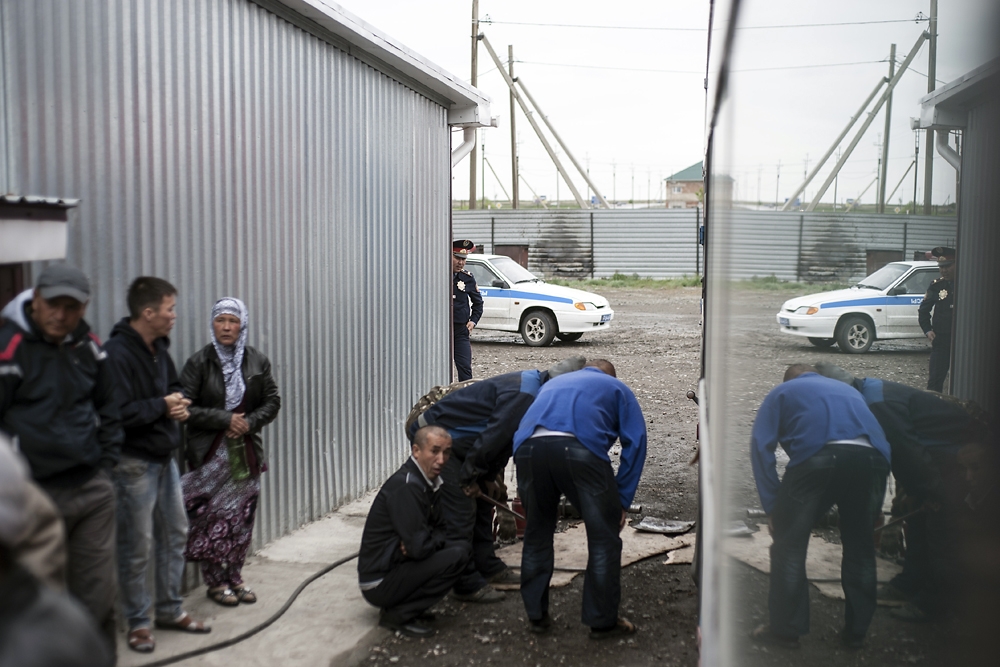 During a stop to repair a tire, Kazakh police arrive to check paperwork and attempt to extort a bribe. 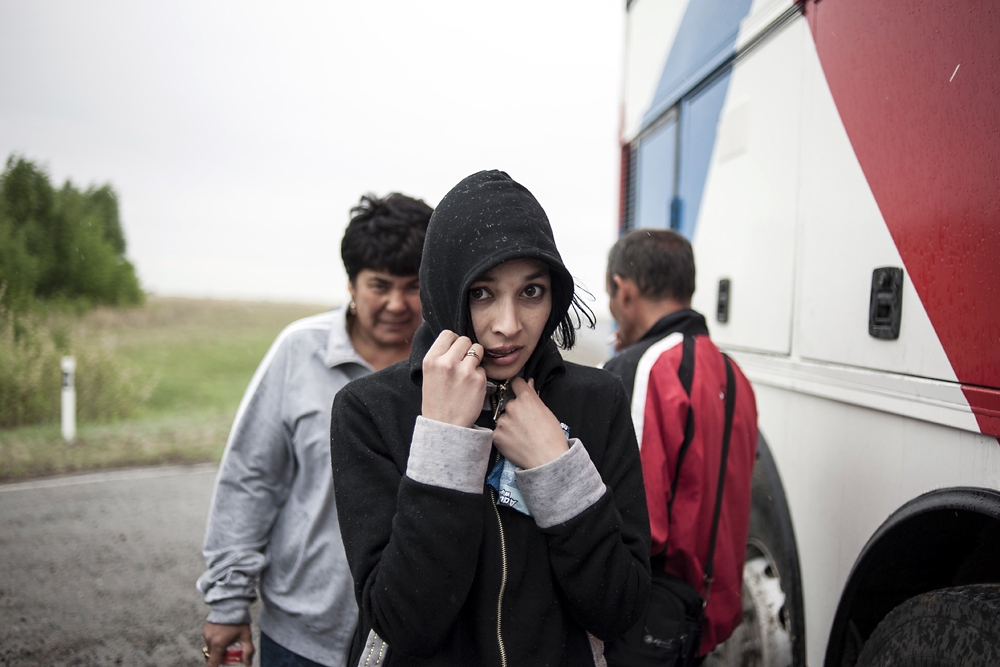 A few female migrant workers have joined the drive to Russia. 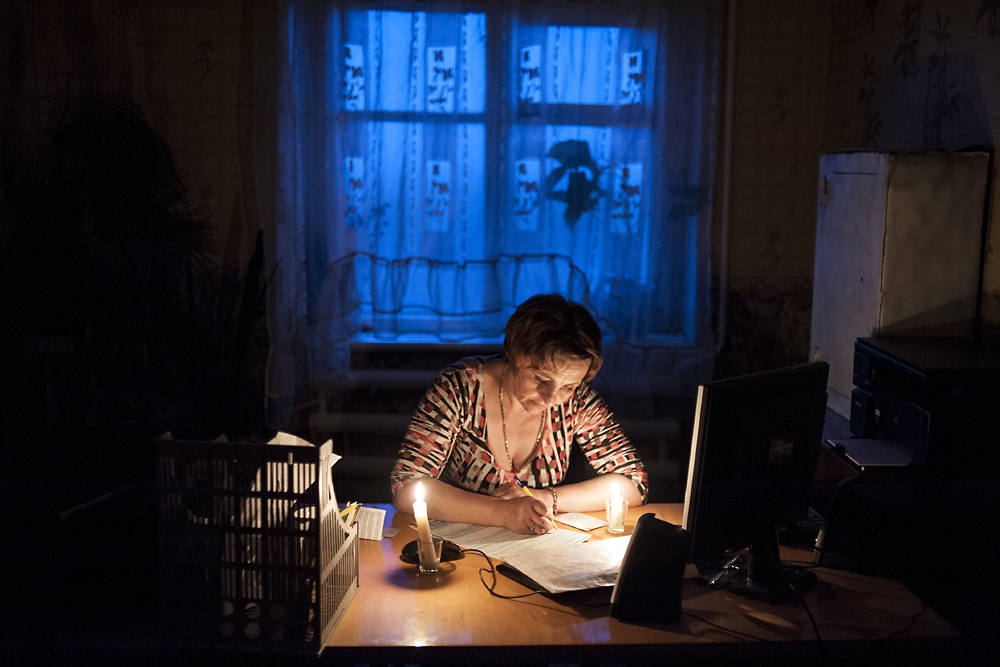 Working by candlelight because the power went out, cafe manager Lena Zimenko fills a bus driver's insurance form for Russia. 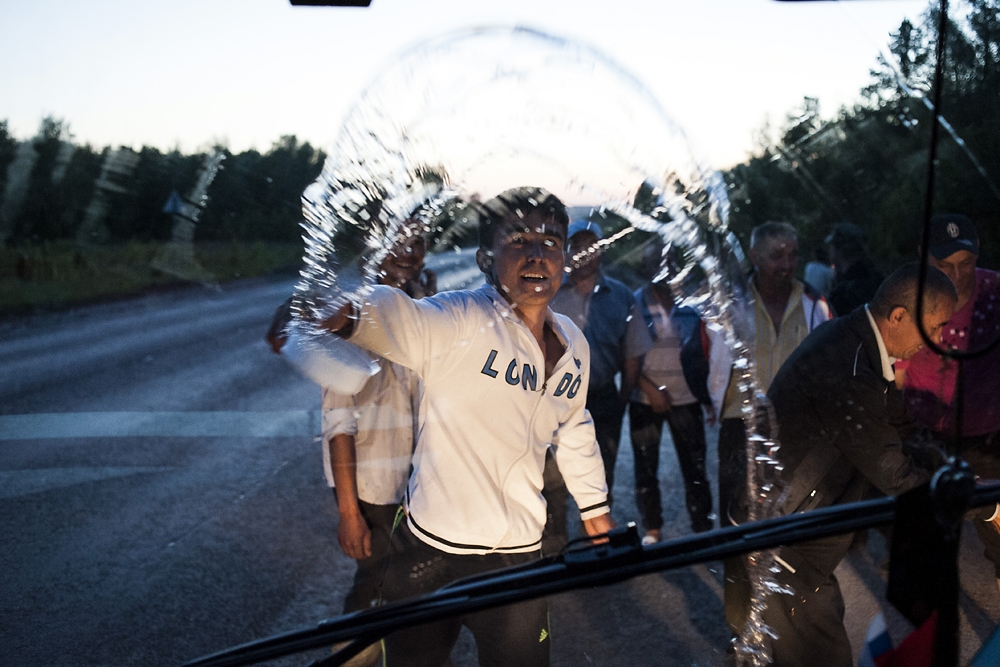 Passengers and drivers clean the bus windshield of mosquitoes and bugs near Bashkortostan, Russia. 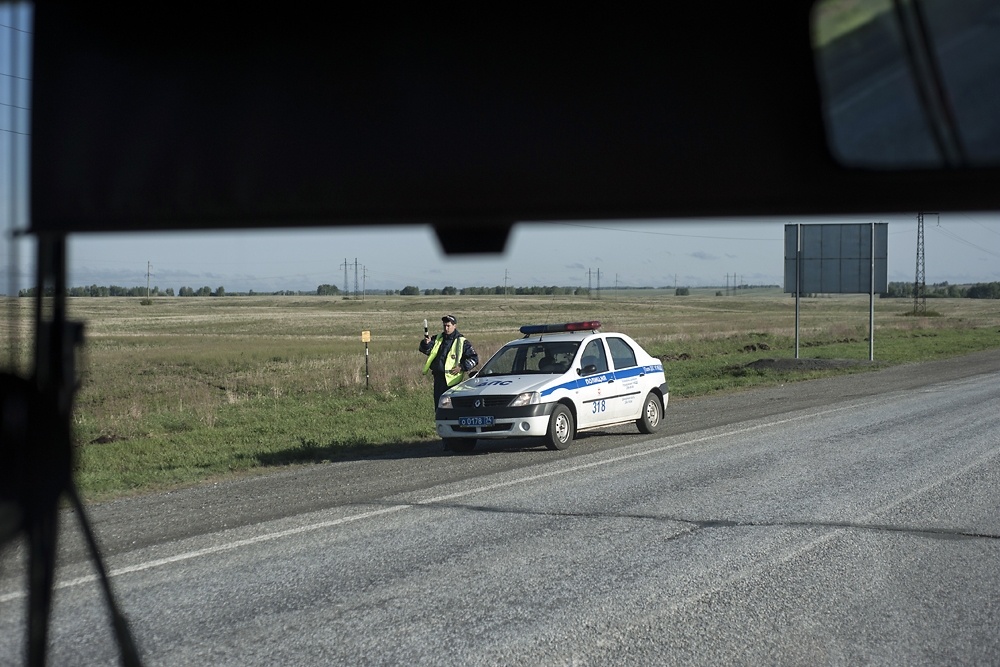 Russian police near Troitsk pull over the bus to check documents. 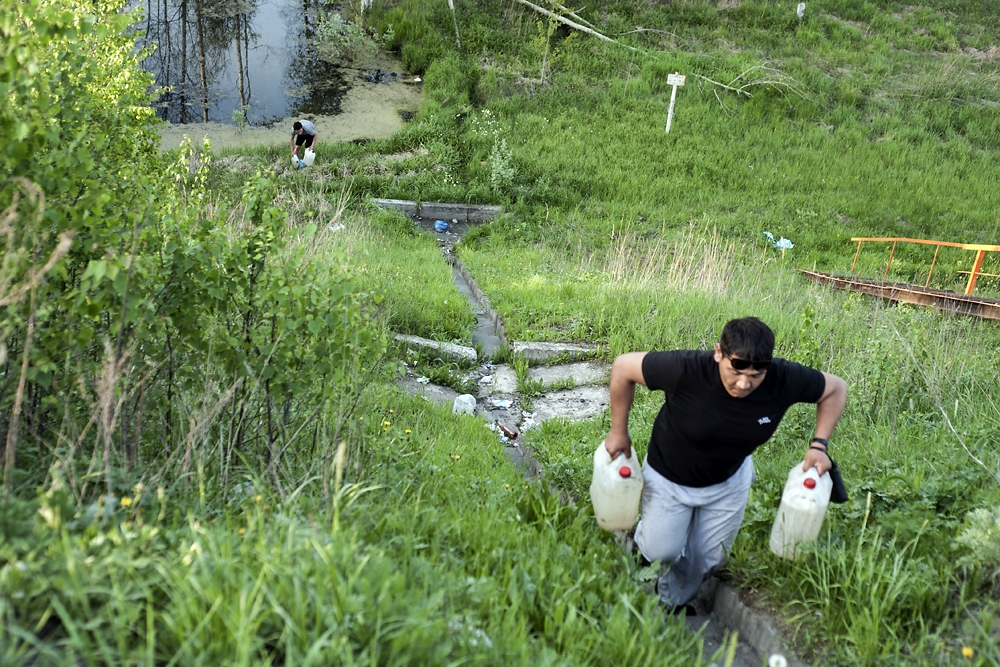 Drivers gather water from a stream in the Vladimir region near Moscow to fill a leaky radiator. 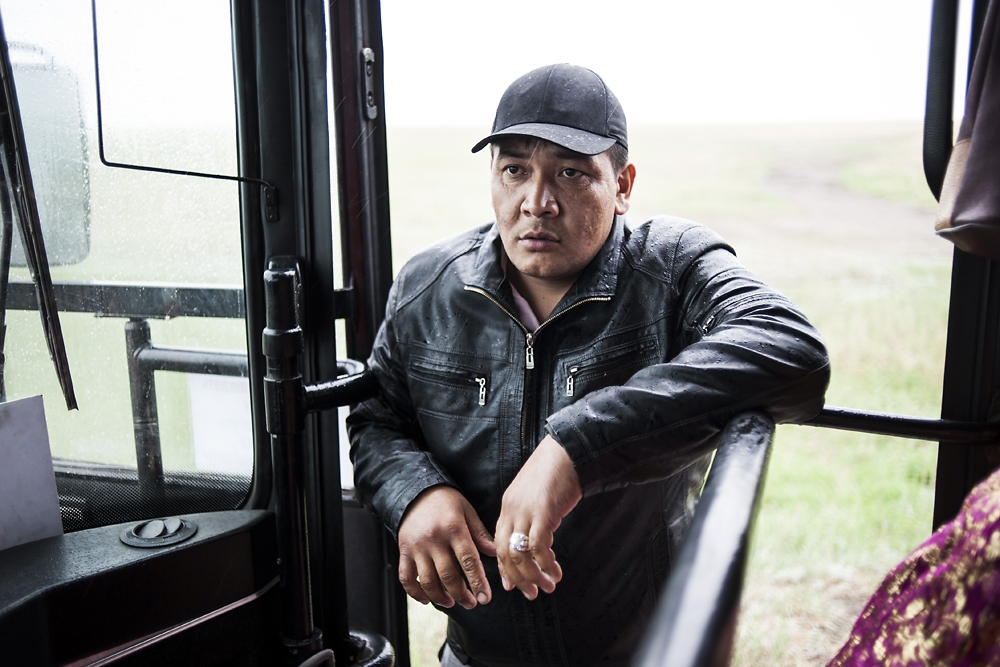 Farkhat, a Uyghur from Kyrgyzstan, is going to Ryazan to work in a Japanese restaurant. 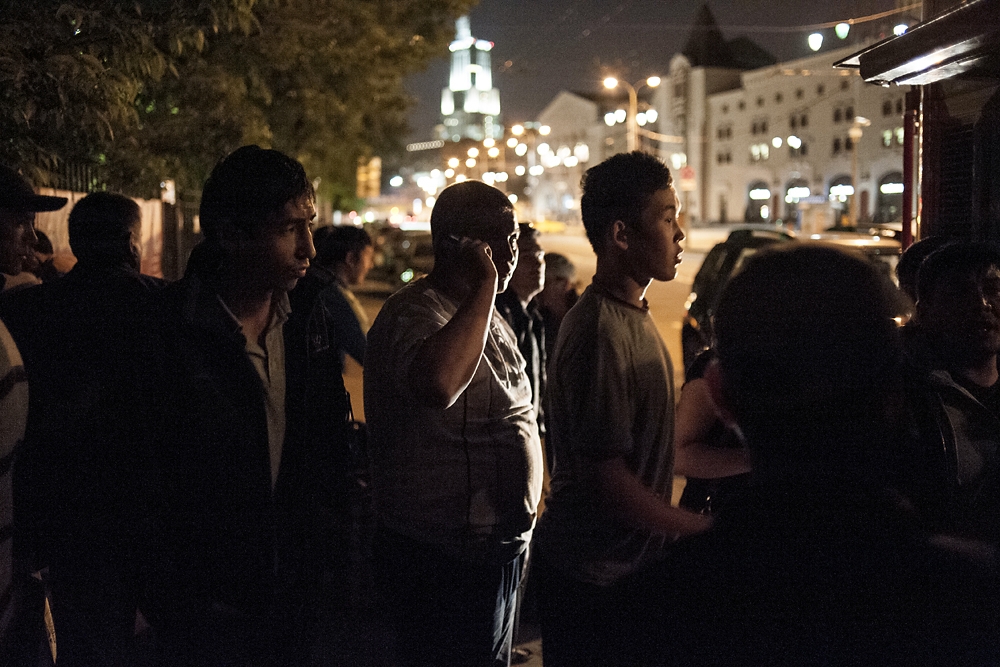 The bus carrying migrant workers eventually arrives at the Kazan railway station in Moscow.
prev
next

There are three ways Central Asian guest workers travel to Russia, the magnet that draws millions of Kyrgyz, Tajiks and Uzbeks each year. The most expensive is by plane. Train is less pricey. Bus is cheaper still, but it’s also the slowest and most prone to scams from beginning to end.

In Khujand, Tajikistan, I approached an agent named Said to enquire about bus tickets to Moscow. For 7,000 rubles (about $203), he promised a big, comfortable bus that would take only four days and depart no matter if it was full or not.

Nothing Said told me turned out to be true. At the appointed time one morning, I met a group of six people in the city center. Said showed up to tell us the bus was waiting in a suburb. Once there, we discovered there was no bus, but two minivans. Said then said the bus was waiting just over the Kyrgyz border, about 30 kilometers away, in Isfana.

The minivans passed a remote border checkpoint. When the border guards from Tajikistan saw my Russian passport, they declared the border closed to third-country nationals. Knowing I had no other option and that I could not prove them wrong, they milked me for 500 rubles ($15) to let me pass. (As a Russian citizen, I do not need visas for any of the countries on this tour, though I was recently banned from Uzbekistan due to my reporting on migration).

In Isfana, there was still no bus, but we changed vans.

I started to learn about my fellow travelers, mostly Tajiks and Kyrgyz from the Ferghana Valley. There was Ali, 40, who graduated with an economics degree just as the Soviet Union was collapsing, and who has traveled to Russia each summer for the past 10 years to work on construction sites. Then there was Farkhad, 43, who had left his wife and four children to work construction in Moscow. He was taking the bus because he couldn’t get a train ticket from Khujand without paying a middleman an exorbitant fee. There was also Gulnisa, 46, a bespectacled Uygur from Kyrgyzstan who trained as a surgical nurse but cannot find a job that will support her family. She had gotten a gig in a Japanese restaurant in Ryazan and was trying to get Russian citizenship.

In addition, I met Argash, 79, from Kyrgyzstan’s Batken Province, who was going to see the grave of his father who was killed during World War II near Moscow. He was taking the bus because it is easier than transiting Uzbekistan, where border guards are notoriously difficult.

Before they even left home, everyone on the bus, it seemed, had a story about a shakedown. And more misery waited just down the road: Most have worked previously in Russia and swap mixed reports on how the Russian police treat them.

By the time we got to Bishkek after a long first day on the road, we had stopped and paid about 15 bribes (usually about the local equivalent of $0.40) to local police along the way because our vans, as we collected more passengers, were dangerously full. Drivers called the payments “tips,” or a “check-in.” I also learned that those passengers and I who started in Khujand got ripped off, spending 25-75 percent too much. Said had even sold one passenger, Ruslan, a ticket to a city not on our route.

After some unclear negotiations at a police station in Bishkek, where we transferred onto a large coach, we took off toward the Kazakh border with six more passengers than seats. (I cannot describe the bus or name the drivers for fear of exposing them to repercussions from local authorities en route.)

At the Kyrgyz-Kazakh border, two guys were kicked off. Ruslan was one of them: The Tajik border guards put the wrong stamp in his passport. He was told he had to go back, a full day in the wrong direction, to get that fixed.

Kazakhstan is an endless, flat expanse of police officers demanding bribes for imagined infractions (accompanied by threats to call the migration police), and real infractions such as missing seatbelts and overloading. From time to time, we would stop at a cafe; a few passengers could not afford to eat. At these pit stops there was never more than a bucket of cold water to wash with.

On the fourth day after leaving Khujand, at around 11 pm, our odiferous bus reached the Russian border near Troitsk, in Chelyabinsk Oblast.

One of the two drivers – they took turns – approached the border office on the Kazakh side and returned with disheartening news: We would have to wait in a queue for 12 hours. But then, suddenly, a uniformed man appeared and conveyed an offer to the bus through the driver. For 7,000 rubles (over $200), we wouldn’t have to wait. By now, we passengers were like a big family; the driver passed around a hat, the guard was pleased with his compensation, and we quickly passed the border only to face the same kind of shakedown from the Russians, who demanded 4,000 rubles.

Our bribe budget depleted by the Kazakhs, we had no choice but to collectively refuse and wait. About six hours later, the inspection began. It took two hours, as Russian officials tore apart all our luggage.

The further north we traveled, the higher the bribes. Later that night, our fifth on the road, cops in Tatarstan stopped the bus and saw me sleeping in the aisle. They seized our license plates and demanded 5,000 rubles ($145). It took two hours to talk down the bribe to 300 rubles ($9).

By the fifth day, the bus’s cooling system sprung a leak. We had to stop every two hours to fill it with water. After six days, we limped into Moscow’s Kazan Railway Station at 2 a.m. I had spent 1,200 rubles on bribes, was cheated 3,000 rubles for the ticket, and spent two days longer on the road than promised.