Frost thawing between Tajikistan and Iran?

The foreign minister snubbed the Saudis for a trip to Iran. 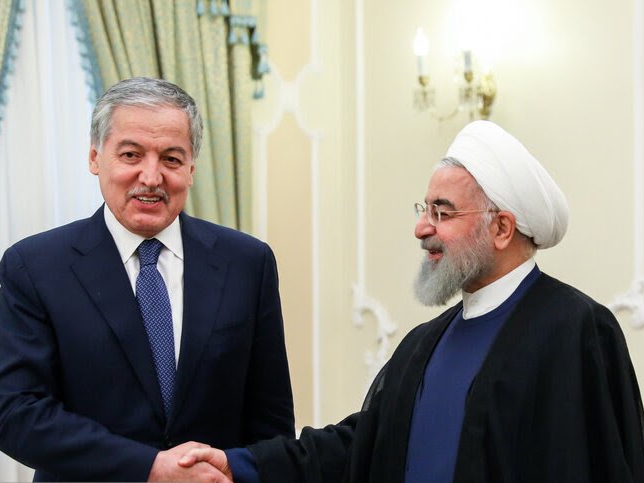 Shake on it: Muhriddin meeting with Rouhani during his visit to Tehran earlier this month. (Photo: Tajik Foreign Ministry)

Is Tajikistan about to have another strategic change of heart?

On June 1, the Organization for Islamic Cooperation held a summit of foreign ministers from its member states in the Saudi city of Jeddah.

Although the conference was scheduled long in advance, Tajikistan’s foreign minister snubbed the event, sending his deputy in his place. Instead, Sirodjidin Muhriddin preferred to pay a visit to the sworn enemy of Saudi Arabia — Iran.

A dark cloud has been hanging over relations between Tajikistan and Iran — ostensibly two brother nations linked by a Persian heritage — since late 2015.

Toward the end of that year, Tehran invited Muhiddin Kabiri, the leader of the opposition Islamic Renaissance Party of Tajikistan, or IRPT, to attend a conference on Islam, enraging officials in Dushanbe. Authorities in Tajikistan had some months earlier banned the IRPT and then designated it an extremist group, so Iran’s apparent endorsement of Kabiri felt like a calculated slight.

Since that time, there is not enough bad that Tajikistan can say about Iran. President Emomali Rahmon has suggested that Iran was a primary instigator of the civil war of the 1990s. Security officials have, without providing a shred of evidence, accused Iran of assisting the opposition cook up violent plots. And Iranian businessman have been squeezed out of the country.

The figures speak for themselves. Trade turnover between the countries was $165 million in 2015. That dropped to $92 million in 2018.

The received wisdom is that this row has to a great extent been engineered by the Saudis.

Riyadh’s man in Dushanbe confirmed as much last year, when he bragged about how his government had granted Tajikistan over $200 million in aid over the years, partly as piece of a strategy to push their main foe out of the region.

Tajikistan, which teeters permanently on the verge of insolvency, likely pursued this friendship in the hope of generating yet more financial assistance and investment from their Arabian friends.

But the turn back to Iran suggests this love affair may have now been put on ice.

The results of the detente have already borne some fruit, with Iran now seemingly explicitly foreswearing its prior cultivation of the IRPT.

On June 2, the Iranian news website Farsnews deleted an old interview with Kabiri, the IRPT leader. Also, Iranian Foreign Ministry spokesman Bahram Qassemi has been cited by Farsnews as saying that “Iran has not and is not supporting any group that acts against Tajikistan’s legal bodies and has always sought good and brotherly relations with that government.” This was another clear reference to the IRPT.

Tajikistan is clearly hopeful this new outbreak of amity will presage remunerative dividends.

“We demand an increase in the volume of trade exchanges, especially the strengthening of investments and presence of Iran in the agricultural, energy, industry and tourism sectors of Tajikistan,” Rasulzoda is quoted as having said.

Rasulzoda then went on to commend Iran for its historic investments in major infrastructure projects in Tajikistan, including hydroelectric power plants and tunnels. Among examples of the former, he included the Roghun dam, which is curious since there is no evidence that Tehran has ever provided any assistance to this economically existential undertaking. It is possible this was wishful thinking.

While in Tehran, Muhriddin urged Iranian President Hassan Rouhani to travel to Dushanbe later this month to participate at an event called the Conference on Interaction and Confidence-Building Measures in Asia.

There is certainly much room for confidence-building in this on-again, off-again relationship.