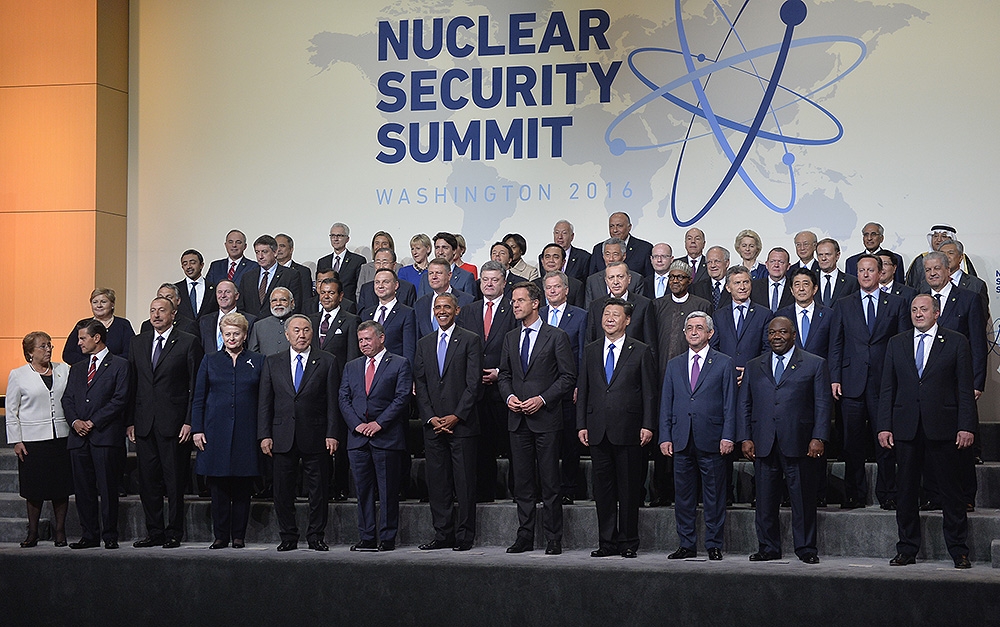 Heads of delegation at the Nuclear Security Summit in Washington, DC, on April 1, 2016. Eurasia was one of the focus areas of the event, and the presidents of Armenia, Azerbaijan, Georgia, Kazakhstan, and Ukraine all attended the gathering. (Photo: Armenian Presidential Press Service)

The renewal of armed conflict between Armenian and Azerbaijani forces over the Nagorno-Karabakh enclave can potentially have global ramifications, participants at the recent nuclear security summit in Washington cautioned.

A concern articulated in national progress reports prepared for the March 31-April 1 summit by several Eurasian governments was how corrosive the region’s ethnic and border disputes are to global nuclear security. The chaotic conditions that accompany such conflicts can make it easier for terrorists and criminal groups to get their hands on, and transport, nuclear or radioactive materials that can subsequently be used in a terror operation.

The most alarming report came from Ukraine, which stated that “Russian military aggression in eastern Ukraine and … [the illegal annexation of] Crimea pose new threats to the national system of nuclear and radiation security.” Such threats include the possibility of sabotage at nuclear facilities, the loss of regulatory authority over radioactive waste storage sites, and degraded border security and social stability.

Warning that this situation “may lead to dire consequences not only for Ukraine, but for many European nations,” Ukrainian authorities called for “establishing international control over nuclear facilities that can be seized or damaged as a result of military actions.”

Azerbaijan’s report likewise observed that the unresolved Karabakh conflict means that “Azerbaijan is unable to provide proper border control along the substantial part of its borders.”

The nuclear security summit had a global scope, but Eurasia was one of the focus areas of the event. The presidents of Armenia, Azerbaijan, Georgia, Kazakhstan, and Ukraine all attended the gathering.

The fighting in Karabakh erupted just hours after Armenian President Serzh Sargsyan and his Azerbaijani counterpart, Ilham Aliyev, each met separately with US Vice President Joe Biden on the margins of the summit. In identical language describing each meeting, Biden cautioned both presidents about the need for restraint.

“Addressing the Nagorno-Karabakh conflict, the Vice President expressed concern about continued violence, called for dialogue, and emphasized the importance of a comprehensive settlement for the long-term stability, security, and prosperity of the region,” a White House press release stated.

Although representatives of Moldova were not at the summit, there have been reports of alleged Russian-linked smugglers attempting to exploit governance lapses and security gaps connected with the country’s separatist region of Transnistria to try to sell nuclear materials to suspected terrorist organizations. Elsewhere, Georgia’s breakaway territories of Abkhazia and South Ossetia have also been associated with reports of nuclear smuggling attempts.

Russian government has provided technical and financial assistance to fellow members of the Commonwealth of Independent States and the Eurasian Economic Union to help address nuclear security threats. Despite supplying such assistance, Russian officials boycotted the Washington meeting and demanded an end to the summits, which have met every other year since 2010.